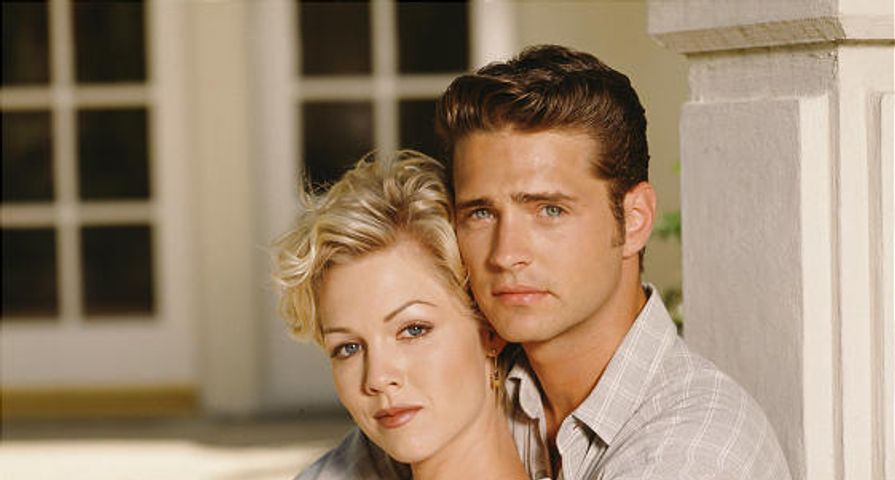 Brandon Walsh: He started out as the fish out of water, a Minnesota kid in Beverly Hills on the hit ’90s TV show Beverly Hills 90210. But he settled in quite nicely, quite quickly. He had that sweet old Mustang; a new James Dean-esque best friend; luxurious sideburns; a fun job at the Peach Pit; a group of pretty, yet angsty friends; and a nice little romantic life. Depending on your definition of “girlfriend,” he had as many as 17 over his eight-plus seasons, plus other mild romances. Played by Jason Priestley, Walsh became a heart-throb on and off the screen. Here, objectively as possible, are his top 11 girlfriends.

Less than a year after he first met the infamous Emily Valentine (more on her later), another short-haired blonde came into his life during the Season three summer episodes: Brooke Alexander. The girl knew her way around a beach volleyball court and Steve was smitten. But Brooke had her sights set on our sideburned lothario, Brandon. She lasted three episodes as a love interest before her true racist colors began to show through. Needless to say, Brandon wasn’t down with that. Poor Brandon, just couldn’t catch a break. Honestly, the only reason she made the list was her multi-episode arc.

By episode 14 of the first season, ladykiller Brandon had already gone through four girlfriends, each of whom lasted just one episode. Would a guest actress ever get a multi-episode arc as Brandon’s girlfriend? Would it be Karla? Nope. She seemed nice and smart, but troubled. We won’t get into the notion that the Latina girl just happened to come from the “wrong side of the tracks” and needed to use the Walsh’s address to get away from the gangs to study at West Beverly. She even gave him a tour of her side of the tracks. But she wound up being rather defensive and mysterious. She constantly accused Brandon of being some sort of elitist Beverly Hills kid. Did she forget he’s from Minnesota? She moved away and that’s that. Poor Brandon.

Marianne had the distinction of being Brandon’s first love interest on the show. She was a little rich girl Brandon met in the pilot episode. She represented all the teen angst you’d expect: she was rich, but rejected the Beverly Hills lifestyle. She seemed perfect for a Minnesota guy like Brandon. They shared some steamy hot tub time, and everything looked great for the new couple. But he screwed up. He gave in to peer pressure and let the whole school think he slept with her. Until he realized he was the good guy and told the truth on the school’s radio station. But the damage was done.

In the Season 2 episode “Fire and Ice,” Jason Priestly got to show off his Canadian-boy hockey skills. It was a perfect excuse to lead into his run-in with Tricia, who was training to be an Olympic figure skater… in the winter sport hotbed of Beverly Hills, of course. She was a girl who’d been dedicated to training all her life and needed a little fun. So she had a skating race with Brandon, and they hit it off. Unfortunately, Brandon wasn’t good for her Olympic aspirations. Too much fun with Brandon led her to blowing a big routine. When she got a second chance, she shut Brandon out and everything was right again for her Olympic dreams. Poor Brandon.

Sheryl gave us a glimpse of Brandon’s old Minnesota life. We can only imagine Brandon’s watery blue eyes as the two said goodbye back home after a year-long relationship, which ended only because of the Walsh’s move. But it didn’t take long for her to show up in Beverly Hills during the first season. She seemed like a nice girl and a nice fit for Brandon. After all, they had all that history together. What makes her even more significant is that, right there in Casa Walsh, she took his virginity. But then she suddenly took a turn for the worse, got drunk, hit on Dylan, which forced Brandon to literally hit Dylan, then she went back to Minnesota. Because that’s the way teen soaps go.

Tracy got a lot of screen time – 23 episodes over Seasons 7 and 8 – but ultimately she was just a way to stall Brandon and Kelly from getting back together quite so soon. They worked together at the college TV station. Brandon, still suffering some heartache from past relationships, was hesitant at first to start anything with Tracy. But he eventually did. Still, not far into their relationship he realized he still loved Kelly. Nonetheless, he and Tracy went to Hong Kong together. There was a whole thing where Tracy found the engagement ring he’d bought for Kelly and thought it was for her. Meanwhile, Kelly was pining for Brandon. Finally, toward the end of Season 7, Brandon dumped Tracy and got back with Kelly.

During the first in-between period of his on-again, off-again relationship with Kelly, Brandon met Susan early in Season 6. She was the beautiful editor of the college newspaper. It was a classic antagonistic courtship – they constantly butted heads, but Brandon’s persistent charms were ultimately irresistible to Susan. Outside of Kelly, this relationship was the longest he had on the show. But there was always the question in Susan’s mind about how “off-again” Brandon and Kelly were. They plowed through some crazy times, including delivering a baby on an elevator and dealing with Susan’s crazy ex. But, as often happens to Brandon’s relationships, his girl decided to move away. Seriously, the guy must’ve had a complex by this point.

After a brief summer fling with Sandy during the Season two summer episodes, it was time for the first day of school. And there was a new girl! Oh, and she was dangerous! Right? She had short, messy bleached-blonde hair, a leather jacket and rode a motorcycle, so what else could she be? She was also awesome, for a while. And, to be clear, legitimately dangerous. She was Brandon’s first multi-episode girlfriend. They were on the school newspaper together; they went trick or treating together; and then she drugged him He got mad, and she became a stalker, slashing tires and making crank phone calls. She even attempted to become a full-on arsonist. Fortunately, she gets the help she needs and resurfaces in Season four, fully healthy, but after some fun times she takes off for France. In Season five, she’s back again, but more as a means to get Brandon and Kelly back together.

Lucinda, you were so right for Brandon, yet so wrong. Those eyes. Those eyebrows. That hair. That husband. She was fiercely intelligent, but also fiercely flirtatious and went after any man she wanted, whenever she wanted, during her long Season four run. As a college freshman, Brandon wasn’t aware at first that Lucinda, a grad student, was married. Within seconds of meeting she asked him out and said, “Are you as smart as you are good looking?” She didn’t mince words. But she was also immediately mysterious – she didn’t want Brandon calling her. It didn’t take long before he found out she was married, so he resisted her, but our man was far too irresistible for her to let go. Then her husband found out about Brandon and they divorced, finally freeing Brandon to be with this sultry seductress. But then she tried to get with Dylan and later she and Clare tried to lure Brandon into a ménage-à-trois, but he didn’t take the bait and wound up with Kelly.

Clearly, we were predisposed to like Nikki. After all, she was played by Dana Barron, the original Audrey Griswold from National Lampoon’s Vacation. She was originally introduced as a temptation for David, who, of course, was dating Donna, during the Season three summer episodes. But she reappeared as school began, with the hots for Brandon – an “older man.” The two-year age gap appeared to be a big deal to Brandon at first, but he relented to her Griswoldian charms. She joined him on the school newspaper; she gave him dance lessons; he punched her abusive ex. Brandon finally seemed to have a solid, long-lasting relationship. But then, after a good four-month run, she moved back to her San Francisco home. Poor Brandon.

Kelly had quite the ride throughout ten seasons. With Brandon, it had been platonic until she developed feelings for him during the fourth season. They dated for a while, but when Brandon proposed and Dylan wanted to take her on a trip around the world, it all got to be too much. After that, her life turned into a real soap opera, with cults and fires and hostage situations. Through most of Season seven, Brandon was dating Tracy, and Kelly was jealous. Brandon finally came to his senses 26 episodes into Season seven and broke up with Tracy in favor of Kelly. Not long after, she got pregnant with Brandon’s child but suffered a miscarriage. Season eight was another tough time for Kelly. She was shot and suffered amnesia, and then Brandon even cheated on her. But they found their way back together and got engaged again. In Season nine, this time it was Brandon leaving a girlfriend for another city, as he headed to D.C. Poor Kelly.