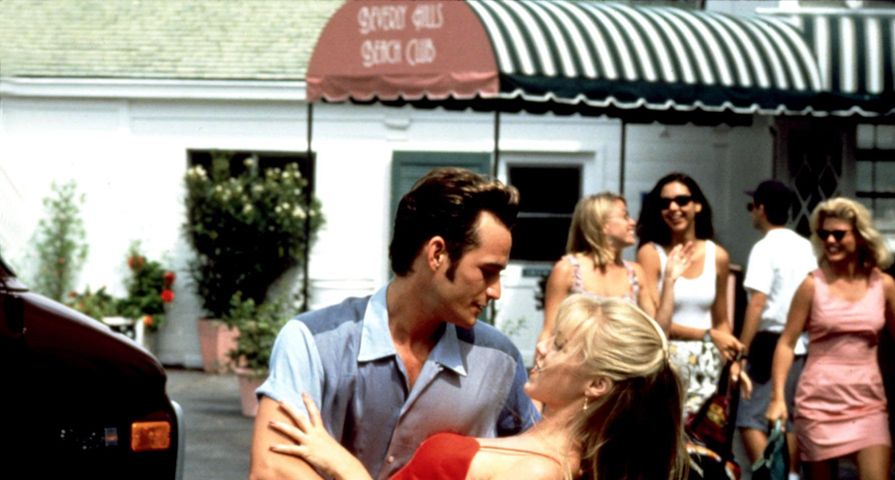 Beverly Hills, 90210 is an institution of ’90s popular culture. The non-stop drama and love triangles held us glued to our seats for all 10 seasons! The constant battles and rivalries between lovers created some of the most iconic couples of the decade. In honor of its role in teen love-lives everywhere, we’re ranking the best and worst couples from the saga.

Ray Pruit may have been one of the most villainous boyfriends on the series—and also probably revealed the show’s prejudice towards poor people, but the insecure, underprivileged Ray seemed great at first. Donna even left Giffin Stone for him! But in time, Ray’s abusive side was revealed, and after cheating with Valerie Malone, he pushed Donna down the stairs! Ray even stalked her and confronted her new boyfriend, football quarterback, Joe Bradley. The two fought and Ray got the worst of it—an injured arm. He obviously tried to sue, but dropped the charges and left town. The series must have realized just how stereotyped Ray was because they were sure to bring him back for an episode to show how reformed and successful he was.

Nothing says “I love you” like giving up your prostituting ways. Artist Colin Robbins ended his scandalous sexual escapades with gallery owner, Claudia Van Eyck, to be with Kelly Taylor. Obviously, Kelly forgives his transgressions, including his cocaine habit, and consequently descends into addiction herself. After her stint in rehab she is forced to give up her relationship with Colin in order to recover. Colin then moves on to Val…like everyone else, before ending up in prison for drug charges. Charming…

Emily Valentine was a crazy wild child that rode a motor cycle and sang like Janis Joplin—and brought the most drama of any of Brandon’s girlfriends. She dated Brandon one night and Dylan the next, before committing to Brandon and going off the deep end. One night, she convinced Brandon and friends to visit an underground club, where she drugs her beloved boyfriend with U4EA—crazy kids and their designer drugs! Obviously, the straight-laced Walsh wasn’t about to let this slide and he breaks up with her, making her spiral into a cake-giving stalker-frenzy. After some intense exchanges, Emily breaks and almost commits arson. Luckily, Brenda and Dylan stop her from lighting the gasoline-doused homecoming float aflame! Emily is then institutionalized, and Brendan makes several visits over Christmas at the end of season 2. But the drama of Emily Valentine once again rears its ugly head when Brandon runs into the full-recovered bada– on the streets of San Francisco. They share an incredibly romantic Thanksgiving weekend before Emily packs her bags and peaces out to France. She comes back in season 5 though…and makes Brandon cheat on Kelly, and then turns around and tells him to be with Kelly. Drama!

Noah is that bartender that every girl falls for, but shouldn’t. Luckily, this one is secretly rich. He was only around for 2 seasons, but his legacy is definitely a sordid one. In season 8, he tries to avoid Valerie’s advances because he just recently lost his ex-girlfriend in a car accident while he was driving. Val always gets what she wants in the end, but the relationship is not successful, so he moves on with Donna. In a crazy turn of event, both Noah and Donna are unfaithful, and wind up breaking up once the infidelity, and the fact Noah was drunk on the fateful night of the car accident, come to light. Noah then gets involved with drug dealers, is kidnapped and held at ransom. He then needed to be saved by Steve Sanders and Dylan McKay. In the final episode, he is with Ellen, a single mother and member of Alcoholics Anonymous.

After seducing Donna’s boyfriend for “the thrill of it,” it comes out that Val actually has feelings for David. But Valerie’s dealings were so sordid that after using various people for money, her old friend, Ginger LaMonica, returns to blackmail her by revealing the truth about their jewelry theft scam. Val refuses to pay and Ginger offers up another option: a sleazy night with David. Val attempts to keep Ginger away from David, but he eventually learns what she has done and leaves her for good.

These two were quite the unexpected pair, but their match up allowed the show to explore the issue of teen pregnancy. Andrea meets Jesse at the Walsh’s anniversary party, and after sleeping together once without protection, Andrea discovers she is pregnant. She and Jesse decide to keep the baby and get married in a civil ceremony. But after the baby is born, there is trouble in paradise. Not only is Andrea having a hard time managing her student life with being a mom, but her and Jesse begin to have trouble in their marriage due to their religious differences. The divide becomes so great that both cheat on each other and consider divorce. Instead, they move away to Yale where Andrea can live out her dream an enroll in pre-med. By the end of the series, Andrea returns to reveal that she and Jesse have divorced, but that she is happy in her life. All’s well that ends well…

This couple did more than just date—they actually got married! And their relationship had everything from feuding families to Romeo and Juliet inspired romance. Toni was the beloved daughter of a mobster named Anthony, who had a hand in Dylan’s father’s murder. The pair met while Dylan was plotting against Anthony, and when she learned of her father’s role in Jack’s death, their love was solidified. She defied her father and married Dylan. Unfortunately, Anthony hired a hitman to kill Dylan, but the hitman was blinded by a rainstorm and ended up shooting Toni. Gasp! At the funeral, Anthony handed Dylan his gun and told him to kill him. In a “to be or not to be” moment, Dylan told him that the killing was over. He later learned that Anthony committed suicide because of his involvement in his daughter’s death.

This relationship should be one of the best since the series ended with their wedding, but the truth is, it was just so riddled with selfishness, we can’t help but feel it bittersweet. The high school romance started off well enough, but Donna’s oath of virginity till marriage, and David’s aspiration to get laid and do drugs, culminated in David hooking up with his record producer. Of course, Donna was nice and amicable in their breakup in season 5, so they were able to make amends in season 7, just in time for Donna to give her v-card to David. David asks Donna how he got so lucky, and Donna ironically says, “You waited.” No he didn’t! By season 8, the two are forced to part again after David’s financial woes lead him to forge one of Donna’s checks and steal money from her. After faking a relationship with Val to make Donna jealous, he accepts that she has moved on with Noah until they break up at the last minute so the series could end with her wedding to David…

Steve and Clare were endearing and it was clear that they genuinely cared about one another. While they were both extremely playful in their dispositions, the two shared some serious moments that came to define their characters moving forward. Clare taught Steve how to be mature, and in their arguments he developed a restraint and humility that he never had with Kelly or Celeste. Steve and Clare reluctantly ended their relationship when Clare left to take care of her distraught father. Steve was forever changed by his relationship with Clare, and she made him a better man for Carly and Janet.

These two had chemistry from the start and the only reason it came to an unhappy ending was because of Jason Priestley’s leaving the show. The pair had their ups and downs in the early years, but things got really spicy in the later seasons when they were attempting to heat up their romance by having sex in new and exciting places. In spite of Brandon’s infidelity with Emma, Kelly eventually forgave him and the two reunited before he moved across the country for a new job.

Leave the drama behind and make room for the Walsh’s! This couple served up some serious parental advice and stability in the early seasons. And let’s face it, we all wanted to be part of the Walsh family traditions!

Kelly and Dylan had fantastic chemistry that was underpinned by Dylan’s past life experience and belief that Kelly was his soul mate (romantic or ridiculous depending on who you ask). The love triangle that ensued between Dylan and two besties was definitely entertaining and Kelly and Dylan kept things hot and heavy, but when Kelly shot down Dylan’s proposal to travel the world, things got ugly. Dylan married Toni, and eventually wound up living with Brenda in London. When he returned to the show, the two rekindled their relationship.

It may be a cliché, but first love is ever-lasting, so I make no apologies for being Team Brenda! This couple had it all—passion, drama, disapproving parents…the list goes on and on. We even had a glimmer of hope of their endearing love when Dylan lived with Brenda in London. But alas! All good things come to an end, but those moments of “firsts” that these two shared will forever be a part of our own real-life fantasies.