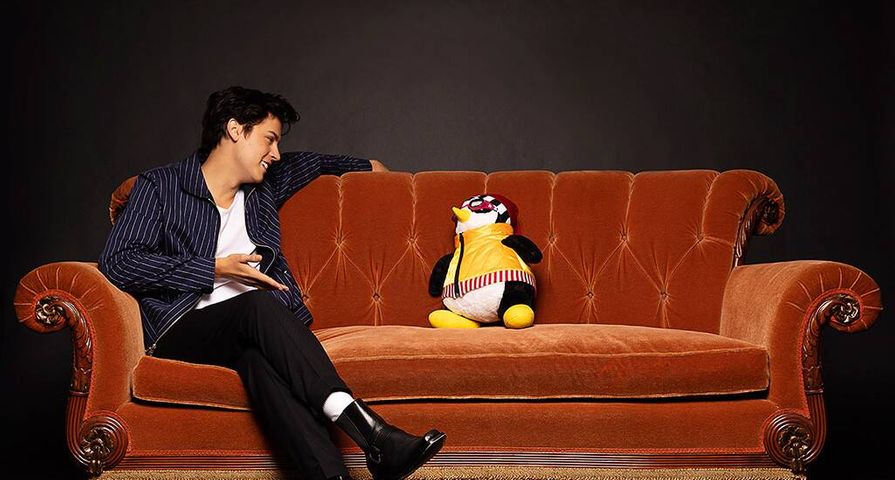 The One Where Ben Grew Up!

As fans and stars alike celebrate 25 years since Friends premiered on September 22, 1994, actor Cole Sprouse returned to the iconic couch to pay tribute.

“The One Where Ben Grew Up. @colesprouse #FRIENDS25,” the caption reads alongside the photo of Sprouse now as well as with three images from his time on the series.
Sprouse isn’t the only celebrating the show’s 25th anniversary though. Warner Bros. has teamed up with Fathom Events for “Friends 25th: the One With the Anniversary” which will include a screening of 12 of the fan-favorite episodes over three nights. The event will take place in more than a thousand theatres across the U.S. As well, Ralph Lauren dropped an entire fashion collection in honor of Rachel Green and her iconic style.
Also gearing up for the anniversary are the show’s original stars. All at the same time on Thursday, September 19, four of the six stars, the ones with Instagram/social media, posted the same cast photo and wrote individual captions to kick off celebrating 25 years. “Celebrating a Thursday night 25 years ago. Seems like yesterday. Thanks to all the fans for watching. #friends #friends25 @lisakudrow @_schwim_ @courteneycoxofficial #jenniferaniston #matthewperry,” Matt LeBlanc wrote.
“Celebrating a Thursday night 25 years ago… THANK YOU to all the fans out there!! We couldn’t have done it without you,” David Schwimmer shared alongside the same photo, adding, “Big love to the other five #friends #jenniferaniston #courteneycox #lisakudrow #mattleblanc #matthewperry #FRIENDS25 #STILLTHEREFORYOU.”
Lisa Kudrow wrote, “Celebrating a Thursday night 25 years ago. We might be in different places but we are connected #STILLTHEREFORYOU #FRIENDS #friends25thanniversary #TWITTER@MATTHEWPERRY #COMEONALREADYJEN.”

Courteney Cox shared, “Celebrating a Thursday night 25 years ago. Thank you to all of our loyal fans across the world. You’ve certainly been there for us!  I love these guys! @_schwim_ @lisakudrow @mleblanc #seriouslyjen? #youtoomatthew #friends.”

The One Where Ben Grew Up. @colesprouse #FRIENDS25

Celebrating a Thursday night 25 years ago. Seems like yesterday. Thanks to all the fans for watching. #friends #friends25 @lisakudrow @_schwim_ @courteneycoxofficial #jenniferaniston #matthewperry