This Is Us S2 Episode 11 Recap: 8 Can’t Miss Moments From ‘The Fifth Wheel’ 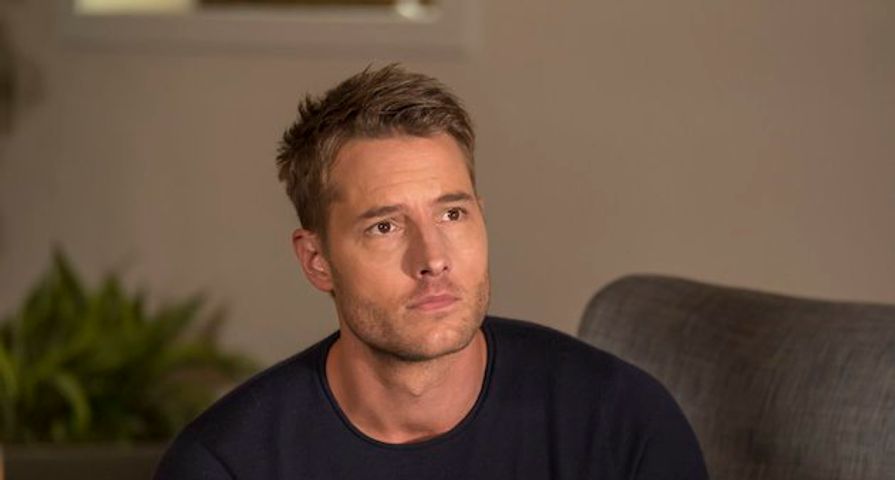 This Is Us returned with a massive and emotional episode on Tuesday, January 9 following a month long break after that major mid-season finale episode that left viewers on the edge of their seats. Many wondered just how they were going to top the ‘Big Three’ episodes, and now many are still reeling from the intense family reckoning delivered by the mid-season premiere episode ‘The Fifth Wheel.’ The episode saw the Pearson clan jump one month ahead in the present timeline as they all came together to visit Kevin in rehab and hash out some very difficult emotions in a therapy session. There is a lot to unpack and marvel over from the episode, so follow along for a full recap with these eight can’t miss moments from ‘The Fifth Wheel.’

‘The Fifth Wheel’ opened up by jumping ahead one month in the present and with Kevin recovering in rehab following his DUI arrest and Kate and Randall were seen getting ready to go visit him to participate in a family therapy session. While preparing for their trip, Kate discusses with Toby about feeling anxious about seeing Kevin after not being there for him when he hit rock bottom and, as always, Toby reassured her saying they had their “own stuff going on too,” referencing their tragic miscarriage. After the two sweetly dubbed themselves “Katoby” Kate asked Toby to take out the trash but when the bag breaks, Toby discovers that Kate has secretly been hiding junk food from him. Meanwhile, Randall and Beth are also preparing for the rehab visit and it was clear Beth was nowhere near ready to forgive Kevin for having Tess in the car when he got his DUI. Randall however told her they had to be there for him.  “I know how you feel — I feel it too,” Randall tells her. “But when I was at my lowest, Kevin was there for me.” Upon Randall, Beth, Kate, Toby, Rebecca and Miguel arriving at Kevin’s rehab facility they find he is “Mr. Rehab,” and learn that Beth, Toby and Miguel cannot participate in the therapy session.

The tense events of the present day in the episode are juxtaposed by flashbacks to a family vacation the Pearsons took to a cabin one summer when the Big Three were around 10. In the flashback, Kevin arrives late to the cabin after being at football camp and is left out by everything happening around him and learns Randall got glasses and is warned not to make fun of him. After Kate excitedly tells Kevin about all the awesome food like hot dogs and s’mores that they make around the fire at night, Rebecca confronts Jack in private about Kate’s “obsession with food.” Kate’s burgeoning weight struggles and Jack not being able to say no to her are important to the parallel in the present with Kate still battling her weight and hiding junk food from Toby.

Meanwhile, in the present, the four Pearsons sat down with Kevin’s therapist Barbara for their session which began with Kevin very solemnly apologizing to each one individually, but Barbara pushes him to be less “polite” and warns them they are going to have to talk about some difficult things. They soon realize that they are going to have to talk about Jack, but not his death which everyone attributes to Kevin’s problems. Instead, Barbara says they are going to have to talk about the not so perfect things about when he is alive. As Rebecca, Randall, and Kate look surprised and agitated about the idea that there would be something “not so perfect” about Jack, things get really difficult. Kevin explains to them how he always felt left out of the family and says explains that he tried to replace his sense of inadequacy with things like football and acting and that “it was only a matter of time” before he turned to something worse. With that defenses went up and Kevin hit a sore spot for everyone when he outright said Jack was an alcoholic, Jack’s father was an alcoholic, and adds “we are a family of addicts,” and suggests to Kate she has a food addiction, trying to make her see that it stems from the addiction gene they got from their dad.

As the Pearsons embarked on their very difficult therapy session, their discussion of Jack was paralleled with Toby, Beth, and Miguel discussing their Pearson significant others, and Jack, while hanging out a bar. The three told each other about how difficult it is to get through to the Pearsons sometimes and how some topics are completely off limits, namely Jack, which they dubbed the “Pearson no fly zone.” As Beth and Toby lamented about how they felt like “outsiders” when it came to Kevin, Kate, Randall and Rebecca, Miguel opened up to them that the reason Kevin, Kate, Randall and Rebecca get to be “on the inside” is because they lived through the loss of Jack. Up to this point, audiences have heard very little from Miguel who was Jack’s best friend when he was alive and is now married to Rebecca, and for the first time ever Miguel remarked about how that looks, now being married to the widow of his late best friend. While the scenes with “the others” were small in comparison to the Pearson’s therapy session, they helped further explain just how difficult the topic of Jack was, which was of course playing out in therapy.

In addition to finally being the one to talk out loud about their father’s addiction, Kevin also shed some serious light about how he really felt growing up. It was in that moment, his siblings, his mother, and the audience realized he had a much different and much less idolized version of Jack, and their family, in his head than they did. He explains how growing up he always felt like the fifth wheel because Kate and Jack had a special bond as did Rebecca and Randall. To further the point when Barbara asked Rebecca if she ever talked about their father’s addiction and warned her kids they might have the gene, Rebecca became extremely defensive, stating because he wasn’t able to be there for the big moments — specifically citing Kate’s impending wedding and Randall having his children — she didn’t want to taint their memories of him, explaining because all they will ever have is memories and won’t be able to make new ones. Barbara then pointed out that Rebecca used two very specific examples of Kate and Randall but left out Kevin, and while Rebecca tries to defend herself, Kevin simply sighs, “It’s typical.” In this moment it became clearer than ever just what Kevin felt and while everyone was busy thinking he had everything so good and so easy, on the inside he felt like he didn’t fit in with his family and that his mother didn’t love him as much as his siblings.

After Kevin lamented about his childhood, and told his mother about how it was always Kate and Randall first, emotions continued to boil until finally the episode hit one of its major moments: Randall’s eruption. After “attacking” their mother and with Rebecca crying, Randall lost it on Kevin, telling him that his childhood was idyllic and he knew because he was there for it so Kevin could tell Barbara any sad story that he wanted but Randall scolds, “Don’t you dare try to pull that same lame-ass wool over my eyes.” He then asks Kevin if they want to “compare childhood baggage,” which turns into a trading of insults between the two as Kevin turns on Randall and asks him if he ever though about why Tess was in his car when he got his DUI in the first place. Kevin tells Randall she was trying to “escape the Randall show,” causing Randall to tell Kevin he isn’t even an addict, the only thing he is addicted to is attention. He then explains that with his Sylvester Stallone movie over, all eyes weren’t on Kevin anymore so “cue the drug problem.” The exchange was harsh and emotional, and some of the best acting done between the two brothers through the entire season, leaving audiences in complete shock as the Pearsons hashed out some very tough emotions.

If Randall’s outburst wasn’t intense enough, no one was ready for what was to come from Rebecca. Mandy Moore’s strength in the character has been pervasive through all timelines and throughout the entire series, but undoubtedly this moment was one of her best. After Kevin and Randall’s exchange, Randall gets up to leave, causing Rebecca to follow him and Kevin scoffing at her always running after her favorite. He then lays into his mother, pressuring her to just finally admit that Randall was always her favorite. After pleading with Kevin again and again that she loves all her children equally Rebecca finally breaks down sobbing, saying, “He was easier! He was just easier and he didn’t recoil when I touched him, and he didn’t abandon me and move away after his father died.” The outburst and exchange between Rebecca and Kevin was so palpable it literally had audiences holding their breaths because of the intensity of the emotions. At the same time, the flashbacks showed Rebecca and Kevin squaring off after Randall loses his glasses and she accuses Kevin of taking them and hiding them causing him to tell her “his whole family sucks” and he hates her. She later talks about it with Jack, and opens up to him about not liking to always be the family “bad guy” and be the one Kevin says he hates.

Following the explosive family session, Kevin is seen sitting on a bench near the water and is joined by Kate and then Randall. Despite what was said inside, the two talk calmly and Randall explains that they all experienced childhood together, but all saw it differently. “I think everyone sees their childhood with different lenses, different perspectives,” Randall says. “And I didn’t come here today to crap all over your perspective, Kevin.” The three are then able to apologize and even laugh as Randall says “So just to clarify, we established I’m mom’s favorite, right?” After the Big Three reconcile, Kevin returns to his room to find his mother has been waiting for him. There she explains to him that she loved him just as much as the other two, but because he was always so bold and fearless she felt she didn’t need to worry about him. Kevin then admits that he did not have an unhappy childhood and Rebecca tells him, “I know we had moments — you and me, Kevin, I know we did. I feel it in my bones.” The episode then cuts back to the past during the vacation when a storm hits the cabin and Kevin awakes to an empty room and sees Randall’s glasses which were under his bed, after taking them to his parent’s room to show his mother he didn’t take them, Kevin discovers Jack, Rebecca, Kate and Randall all sleeping in the same bed. Kevin then grabs a blanket and pillow and curls up on the floor, but when Rebecca wakes up and sees him, she gets up, lies on the floor beside him, and falls asleep with him in her arms.