Then And Now: Cast Of Wet Hot American Summer 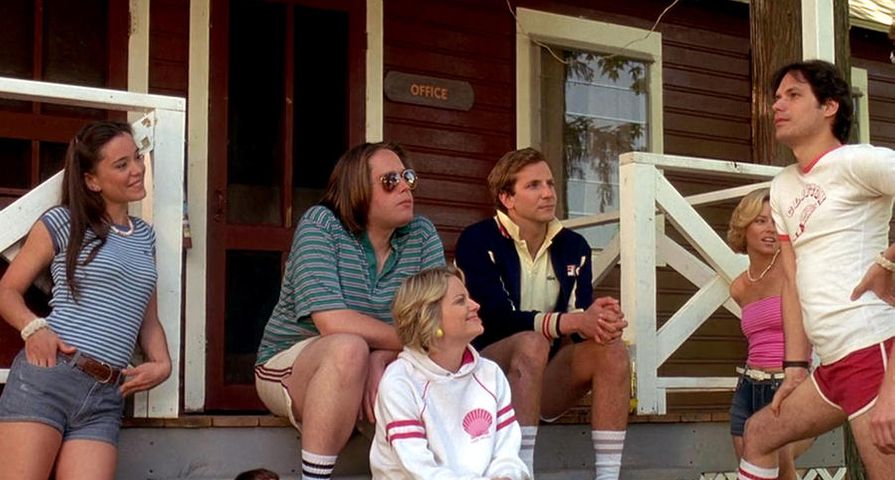 In 2001, the Camp Firewood counsellors made a pact that in 10 years, they would reunite.  Well, it’s 14 years later and the Netflix re-boot will actually be a prequel to the movie and depict what the counsellors were up to the first day of camp. Audiences fell to the floor with laughter over this indie comedy that featured several up and coming stars such as Paul Rudd, Elizabeth Banks, Bradley Cooper, and Amy Poehler. The scenes with unhygienic kitchen staff, horny counsellors, and the hippy camp director are recognizable for anyone who went to summer camp. Now that the reunion is happening thanks to Netflix, let’s take a look at what the cast of Wet Hot American Summer has been up to between the 2001 movie and 2015 TV series.

After quirky camp director Beth (Janeane Garofalo) completes her summer goals of hooking up with the nerdy scientist (David Hyde Pierce) next door, Garofalo appeared in several independent movies and TV shows including Delocated and Girlfriend’s Guide to Divorce.  Garofalo will be reviving her role in the Netflix TV series set to air July 31, 2015.

In WHAM, Michael Showalter (Coop) could never get the girl of his dreams Katie (Marguerite Moreau), but now he is the creator of the Netflix TV series reboot. In the interim period, he has written for several shows including Michael & Michael Have Issues, and created The Michael Showalter Showalter.

Bradley Cooper played Ben, the incredible producer of the Camp Firewood Talent Show, and actually missed his own college graduation to film Wet Hot American Summer. He has been nominated for four Oscars since he said goodbye to campers in 2001. His latest film Aloha (2015) is out in theaters co-starring Rachel McAdams and Emma Stone. He once told Kelly Ripa that his favorite on-camera kisser was his Wet Hot co-star Michael Ian Black.

Moreau played hot girl Katie in WHAM and spent most of her time leading Coop (Michael Showalter) on and macking on Andy (Paul Rudd). Recently, she played Dr. Emma Marling on Grey’s Anatomy and Linda in Shameless. She will also be playing Katie in the TV remake.

Since making love with Ben (Bradley Cooper) in the camp’s shed, Black has worked again with Paul Rudd in This Is 40 and appeared in several TV shows including Inside Amy Schumer. Never fear, McKinley is back at Camp Firewood on Netflix.

Since portraying Andy, the cheating camp counsellor who tosses campers out of cars, Paul Rudd has worked with former Camp Firewood alum Amy Poehler in Parks and Recreation and in They Came Together (2016). In addition to his long list of acting credits rocketing him to the top of Hollywood A-list, he most recently became a superhero portraying the titular character in Marvel’s Ant-Man.

High strung choreographer and director Susie (Amy Poehler) moved to Pawnee where she became a City Counselor in Parks and Recreation. Poehler has been busy writing a book, “Yes, Please,” and raising two sons who she had with Will Arnett.

All viewers knew Christopher Meloni (Gene) was a little weird with his fridge-humping-fridge fetish, but it got stranger in True Blood as he played blood sucking vampire Roman Zimojic in 2012.

A SNL alum, Shannon left audiences struggling for breath from laughing over her character’s (Gail) upcoming wedding to a junior camper. Since Camp Firewood, Shannon has been involved in several projects including Raising Hope and Neighbors From Hell.

After Henry Newman (David Hyde Pierce) received tenure and made plans to move away with camp director Beth (Janeane Garofalo), Pierce finished filming Frasier in 2004. He continued to play Kelsey Grammar’s brother on The Simpsons as Cecil Terwilliger. Pierce also appeared in Broadway in Spamalot (2004) and Curtains (2006), and he has a recurring role on the TV series The Good Wife.

Aaron (Gideon Jacobs) spent his last day of camp supporting Gail (Molly Shannon), who was getting a divorce. Jacobs has not acted since 2006, but he appeared in small roles in House of D (2004) and Mr. Deeds (2002). Sadly, he was not casted in the Netflix TV series.

The highlight of Neil (Joe Lo Truglio)’s summer was chasing down Victor (Ken Morino) and dragging him back to the lake before the campers went over the falls. Truglio is currently Charles Boyle, Jake Peralta (Adam Sanderg)’s enthusiastic sidekick on Brooklyn Nine-Nine.

J (Zak Orth) was the cool counselor who tried to get McKinley laid, but instead bought him a chaise lounge as a wedding present for him and Ben (Bradley Cooper). Zak Orth has been featured on several shows such as Veep, Revolution, Happyish, and appeared in several films including They Came Together with Wet Hot American co-stars Amy Poehler and Paul Rudd.

Poor Victor (Kevin Marino) never made it back to camp in time to hook up with counsellor Abby (Marisa Ryan). However, he gets the ladies as Dr. Glenn Richie in the soap opera Children’s Hospital and was also in Wunderlust (2012) with former co-star Paul Rudd.