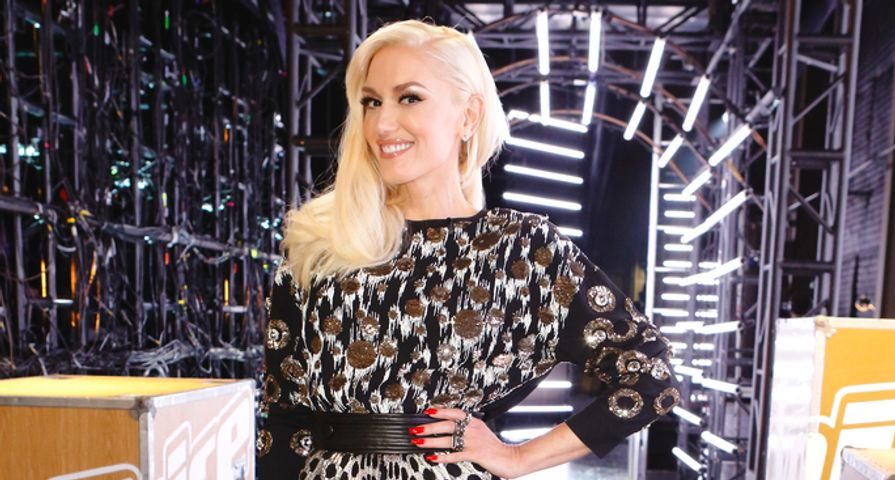 The Voice just wrapped up season 9 crowning Jordan Smith the finale winner. Despite the fact that the show is all about finding America’s newest and brightest singing talent, this season was mostly about the coaches, especially Gwen. Gwen not only released a new single while filming The Voice, but she also announced a new relationship with fellow Voice coach, Blake Shelton. These weren’t the only two things directing our attention toward the singer this season — her eccentric style always has us looking at what she will wear next. Sometimes she nails it and we are floored by her beauty, but we must admit, as much as Gwen is gorgeous and a fashion icon in some circles, not even she could pull off some of her outfit choices this season. Here’s a list of Gwen Stefani’s best and worst outfit choices on The Voice this season.

We’ve got to get the worst out of the way right off the bat. There’s so many geometric patterns on this outfit that it might hypnotize us if we stare too long. The t-shirt crop top with black sleeves and a shimmering pattern starts off cute, but the rest goes down hill. She pairs it with a thick black and gold belt to hold up what appears to be a skirt over a pair of pants. The skirt has a circular geometric pattern while the pants are covered in diamonds and squares. Then her hair is parted so far to one side it looks like a comb over, which can sometimes be stylish on a woman, but she’s pulling too many looks into one. We aren’t sure what this outfit started out as, but the look definitely got lost along the way.

It’s pretty obvious this look was meant to be artsy, but we think it probably looks best left on a hanger in the closet. There’s so much lace it almost looks like she’s wearing a net — we aren’t quite sure whether to wear this dress or go fishing with it. She’s got a patent leather mini skirt underneath the 3-piece top and a leather belt around the waist to offer up some shape to the outfit. We must admit the hair ties in quite well with the overall look, but it’s kind of dated and doesn’t do much for Gwen’s punk-rock essence. The only good thing about this outfit is Gwen’s flawless make-up that features a floral pink lip and classic black patent shoes.

Despite Gwen’s light complexion, she looks good in bright colors, but this outfit was a little too bold with color. She wore a red sequined, one-shouldered top with one wide flare sleeve over a pair of matching red leather leggings. To top it all off she literally matched head-to-toe with red heels and red nails. While it’s important for an outfit to match…there is such thing as too matchy-matchy. At times during the show she seemed to just blend right into the signature red coach chair. We’re just grateful she didn’t wear red lipstick and dye the tips of her hair.

This look had potential if she had just paired the top and shorts separately. Each piece of clothing has a big personality and when mixed together kind of clash. She’s got a baggy white and black polka dot sheer blouse with a black tank top underneath. But things get whacky when she wears it with a pair of geometric black, yellow and white shorts and fish nets underneath. The red lipstick looks spot on with the black and white top and ankle-strap shoes, but other than that the look kind of falls apart. We love that Gwen is able to rock many hair-dos, but this one was a little too eccentric with tightly wound knots all over her head which reminded us a little too much of Miley Cyrus…and that is never a compliment in reference to fashion. Gwen’s outfit is so distracting we almost overlook the fact that Rihanna is wearing denim on denim. Yikes!

This dress was made to look like gold sequins, but upon closer look it’s actually just a bunch of shimmering pennies, literally. Doesn’t seem like Gwen had to splurge on this one…I think if we added it all up it must have cost about $2. The dress has a black leather back that covers her chest moving into a high turtleneck. And it appears she’s wearing a black long sleeve shirt underneath the tank-fitting dress which she pairs with a gold crowning headband, black nails and black fish nets (Take-away tip from this article: fish nets are never okay).We aren’t sure we’d pay two pennies for this outfit!

This strapless dress almost looks like lingerie because it is so revealing with a corset top that hugs her petite frame and features a plunging neckline. The dress then flares out around the hips making her look like a black swan ballerina. It’s feminine, yet edgy like Gwen. The corset has beautiful sheer detailing with sparkles and a bit of lace, while the bottom has more of a stain ruffle. We love that she went simple with her platinum blonde hair, just letting it hang down over her one shoulder with a little twist around the tips. She skipped out on wearing any jewelry up top, sporting a bare chest with just some simple sparkling bangles on her wrists.

Gwen loves patterned and textured clothing — anything that stands out! Sometimes it fails her, but other times she’s spot on and comes up with a completely flawless and unique outfit that is all her own. This ensemble is the perfect example of pairing two patterned pieces together to make a look that flows well together, which is not an easy task! She’s got a pair of ankle-strap pumps and fish net nylons with some stone grey chunky rings. For a pop of color, she sports a bright red painted nail.

Gwen’s hair is the highlight of this outfit with a high top knot and two long braided pig tails. She’s got the whole ‘tribal warrior princess’ look going on in this skimpy ensemble. She pairs a short, flowing sheer green dress with bands of ethnic detailing around the waist. The sheer material of the dress allows us to see a black pair of highwaisted spanx underneath, while her wrists are stacked with silver and black bangles, and she sports a thick gold choker necklace. She finishes the look off with black fishnets and Jimmy Choo lace ankle boots. We’re pretty sure there’s only one person that can pull off this strange look and it’s Gwen.

This look is clean and sleek, but still edgy enough for Gwen to rock. The dress was originally a gown that was shortened into a modern day ’90s mini dress. It reminds us of something we’d see in the film Austin Powers, but of course, much better. The top half of the dress is the focus with cutouts along the neckline to showcase her collarbones and a black cloth lining to add some color contrast. To finish off the look, she’s got a pair of black thigh high boots and slick high pony tail.

In an interview with InStyle, one of Gwen’s stylists for The Voice, Mariel Haenn said Gwen asked to be more feminine this season. As much as we love that Gwen can pull off the whole tomboy, punk chic look (and she’s one of few women who can pull off boyfriend jeans) we kind of like seeing this side of her! Gwen looked like a shimmering beauty in this simple, but elegant gold, floral textured mini dress. Normally the cream color of this dress would wash out her complexion, but the darker tones around the collar of the dress, and the sparkly Cinderella shoes with her smokey eyes add the perfect balance. She wore her blonde hair down with a soft curl and gold bangles on both wrists.

Gwen looks like a fierce rocker chick, but still quite feminine in a glittery red dress and black over the knee boots. It’s pretty clear this dress was made for a performer like Gwen. The bottom of the dress moves with a swish, hanging like a 1920s flapper outfit and the detailing of the haltered top draws our eyes upward with a sequined red and black pattern over a lace bust. We absolutely love this look for Gwen. The dress is a showstopper all on its own, so she goes subtle with the jewelry, only pairing it with a chunky ring and black-tip french manicure.

Gwen ended the season on a high note in terms of her fashion. She awed us all in a classic white ensemble, letting down her long blonde hair with soft curl on the bottom. The unique flare sleeves add a nice contrast to the rest of the slim fitting, floor length dress which, might we add, hugs her in all the right places to show off her flawless figure! Of course, Gwen couldn’t play it too safe. The dress featured a large slit up the center giving us a peek-a-boo to a pair of gorgeous silver shimmering heels. She paired the dress with a chunky silver bracelet on each arm and a couple dazzling rings.