Although fans can expect a lot of the same drama, lies and romantic entanglements of the other Bachelor Nation series, this one sets itself apart with one major piece: the music. Every contestant has a musical background and each goes through the “incredible journey to find love through music.” Chris Harrison revealed the inspiration behind the series was Lady Gaga and Bradley Cooper’s headline-making performance during the 2019 Oscars. “I mean, A Star Is Born, Gaga, Bradley Cooper, that moment at the Oscars, when I thought they were just going to have sex on stage,” Harrison said. “Could we create that kind of chemistry? Could we do that with The Bachelor?”

Listen to Your Heart cast 23 single men and women for its first season ranging in age from 21 to 38. They all have their own genre of music they perform in including R&B, soul, country pop, indie rock, pop, American folk and so much more, and they all come from different backgrounds. “Some people have been grinding at this for forever,” he said. “One of the guys was just on American Idol, someone came out of their church choir, musical theater, you name it. They all want that relationship. And they know it’s tough to find being a musician.” That contestant who competed on American Idol was 29-year-old Trevor Holmes. Reality Steve also hinted to keep your eye on some contestants in particular, because odds are they will be making their way to other series such as Bachelor in Paradise. “Would not be the least bit surprised to see Jamie on a future “Bachelor” or “Bachelor in Paradise” season,” he tweeted during the premiere. Chris Harrison also echoed that sentiment that you might see some of these people elsewhere.  “That’s the good thing about The Bachelor. There are no rules. It’s not like we’d be breaking any regulations,” he said. “If somebody is single and we feel [they] would be great for the franchise, why not?”

Those who watched the April 13th premiere of Listen to Your Heart will have noticed that this isn’t the same Bachelor mansion fans have seen season after season. “It’s a very different mansion. We’re not in the Bachelor mansion! We moved to a bigger place — a little different vibe,” Harrison said of the new location.

The mansion might be different, but fans can expect a lot of the same drama, tears and romance as all other Bachelor shows, just this time with a little added melody. Chris Harrison said that fans of the regular Bachelor Nation series shouldn’t be skeptical of the new series. “Just know that if you’re a Bachelor fan, it’s going to have that awesome familiarity. It’s going to feel right. But then there’s going to be this weird, eccentric twist to it that you’re not quite sure where it’s going. That’s why it’s so good and so new and so fresh. I think Bachelor Nation will absolutely just gobble this thing up.” He added: “If we’ve learned anything over the years, it is about forming those relationships, the sincere love, then we’re going to lean into the music part of it.”

Of course, with the added element of a musical focus, the format had to be tweaked as well, but it will still look very similar to other rose ceremonies that are seen in Bachelor in Paradise, at least for beginning of the season. “With the rose ceremonies, there are men and women, women hand out the roses to the guys, guys will then hand out roses to the women and people will be going home based on those relationships — having nothing to do with the music,” Harrison explained. “Music’s always a part of the show on the dates and you know, they’ll be at the house, playing for each other, but it’s not about the performances.” However after solid relationships have been formed, musical performances will become a bigger part of the show and they will be judged by musical guest stars. “Then it is about those performances and the chemistry on stage,” Harrison added.

Once contestants start testing their relationship with their on-stage chemistry, they will be doing so in front of a lot of famous faces. It has been revealed that Jason Mraz, Kesha, Toni Braxton, Rita Wilson, Taye Diggs, Andy Grammer, Ashlee Simpson, Pat Monahan, Evan Ross, and Jewel are all set to be judges on the series in some capacity. In addition, Chris Lane (who married Bachelor alum Lauren Bushnell), Shaggy, and The Plain White Tees will all be giving performances throughout the season.

The second couple who makes it to the final this season are Bri Stauss, a 28-year-old pop singer from Provo, Utah and Chris Watson, a 30-year-old soul singer from Los Angeles, California. Reality Steve revealed that Chris and Bri had a special moment before their finale performance. “Chris and Bri told each other they loved each other on camera before their finale performance. Chris Harrison said they were the first couple to do so.”

Since this series is all about music, the final two couples have to perform songs together in front of celebrity judges before a winner of the season is determined. Reality Steve revealed that Chris and Bri sang “Give Me Love” by Ed Sheeran and Adele’s version of “To Make You Feel My Love.” Meanwhile, Trevor and Jamie sang their own original song as well as “Speechless” by Dan and Shay.

As part of his spoilers, Reality Steve revealed that the final two couples (Bri & Chris and Trevor & Jamie) are judged by a panel of five celebrity judges. Those judges include: Kaitlyn Bristowe, Jason Tartick, Taye Diggs, Jewel, and Rita Wilson.

After the final performances and getting to know the couples, there can only be one winning couple! According to Reality Steve the winning couple is Chris and Bri! “After deliberation, judges determined Chris and Bri were the winners. They won the opportunity to write and record some original music and make at least one music video. They will also be going on tour once the finale airs.”

Just like any season of any Bachelor Nation show, fans of course want to know: are they still together? When Reality Steve first revealed his spoilers for the first season of Listen To Your Heart in mid-February, he wrote, “Both Chris and Bri and Trevor and Jamie are a couple.” Unfortunately, Reality Steve also seemed to think that Trevor and Jamie weren’t going to last long, sharing, “Kaitlyn asked Jamie and Trevor if they were in love and Trevor replies they were falling in love and they plan to continue seeing each other after the show. Anybody that knows anything about Trevor’s f**k boy past knows that Jamie is in for a rude awakening once this is all over.”

Reality Steve made it clear that throughout the season fans will hear more about Trevor’s reputation as a ladies man, which is why he was skeptical about Trevor and Jamie having a relationship after the show. Well, it seems Reality Steve was right about Jamie getting a “rude awakening” because as the series premiered on April 13th, he revealed that the pair had already broken up. “One thing to add to the #ListenToYourHeart finale spoiler: Trevor already broke up with Jamie. For anyone that knows anything about Trevor’s past, this isn’t the least bit surprising.” Now, only time will tell if Jamie ends up on Bachelor in Paradise like Reality Steve has already predicted.

(UPDATE): One thing to add to the #ListenToYourHeart finale spoiler: Trevor already broke up with Jamie. For anyone that knows anything about Trevor’s past, this isn’t the least bit surprising. 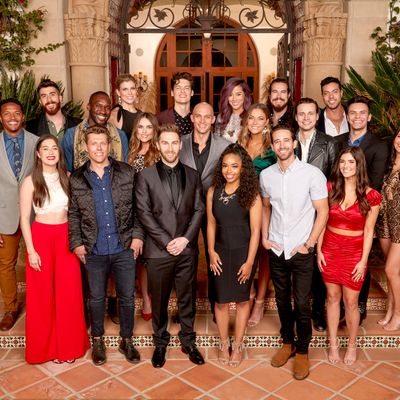