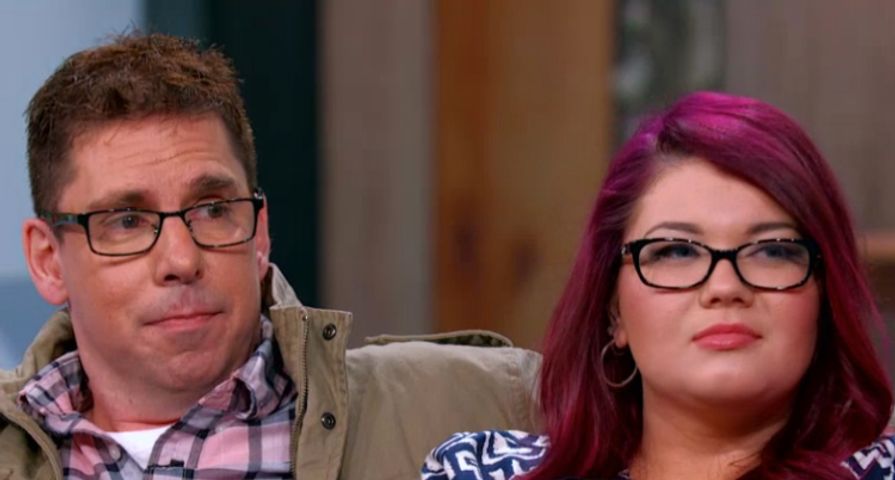 Fans of MTV’s hit series Teen Mom know that drama is in no short supply when it comes to the lives of the eight women starring in Teen Mom OG and Teen Mom 2. While the focus is on their adjustment to life as young mothers, a large basis of the show is their relationships with their children’s fathers, and the new loves in their lives. Teen Mom OG’s Amber Portwood has had one of the most tumultuous stories on the show, but she is finally on the right track and doing great, that is until Matt Baier came along. They met on Twitter, he is 19 years her senior, and while her family members and audiences alike sensed something strange about him from the start, she adamantly defended him and even became engaged. Just recently however, red flags around Matt have been popping out everywhere thanks to the sleuthing skills of Radar Online and these are things that Amber can’t possibly ignore. Check out Matt Baier’s 5 biggest scandals!

One of the biggest storylines for Amber on the latest season of Teen Mom OG was the bombshell that Matt Baier reportedly at 7 illegitimate children he hadn’t told her about. Her ex, Gary Shirley, found this out and informed her, and while Matt denied it at first, it turns our he did lie. He had told Amber he only had two children, but then admitted there were more, the actual number now is still vague. According to reports from OK Magazine, another one of Matt’s ex’s recently came forward claiming her child was his, bringing his kid count up to 8. While this had to have been a huge red flag for Amber, she says the two worked through and worked to build the trust back, and she stuck with him.

Amber and Matt have always been upfront about the fact they met on Twitter and he decided to move in the very same weekend he first visited her in Indiana, however it seems she didn’t bother to ask what his other Twitter activities were like. It has recently been revealed by Radar that before Amber gave him the attention he wanted, he tried many tactics to get a response out of several Teen Mom OG and Teen Mom 2 stars. He was particularly mean to Teen Mom 2 star and one of Amber’s friends, Kailyn Lowry. Back in 2014 he wrote a slew of horrible tweets aimed at Lowry inlcuding,  “What was the topic of Kailyn’s book? How to bang ugly dudes, cheat in a shower and have my face always look like I’m allergic to shellfish?” and “The worst thing that ever happened to high definition is Kailyn’s face #DAMN.”

He may have been mean to Kailyn, but it is hard to tell if it is better or worse than when he used his Twitter to hit on Amber’s co-star Farrah Abraham BEFORE he even tried talking to Amber. In early 2014 he continually called Farrah “beautiful” and even tweeted, “I think they should do a teen mom beauty pageant THAT would be great tv. Although @F1abraham would win in a landslide #teenmom.” Then when she tweeted about online dating as a promotion he responded with, “@F1abraham Farrah forget online dating. I’d be honored to take u out :).”

If it wasn’t bad enough that Amber clearly wasn’t Matt’s first choice for a Teen Mom girlfriend, it is no better that she wasn’t his second either. After Farrah ignored his advances, it seems he turned his online attention to Teen Mom 2‘s Jenelle Evans. In early February 2014 in tweets dug up by Radar, Matt wrote, “@PBandJenelley_1 I am a huge fan and think u r stunningly beautiful. How about a follow? U will make a crappy Saturday good #please.” He just kept them coming too, “Am I the only on who thinks @PBandJenelley_1 is absolutely beautiful? #beautiful.” Interestingly enough his attitude towards Jenelle changed by April, after she had ignored his attempts. Then his tweets took on the bullying approach, “Only 60 min until @PBandJenelley_1 makes even Americas worst moms feel good about themselves #teenmom2reunion.”

The latest, and most disturbing Matt Baier scandal was revealed by Radar Online on March 1. Months before Amber and Matt began dating in 2014, a woman filed a restraining order against Baier accusing him of sexual assault. The woman claimed Baier was an ex-boyfriend and he assaulted her on Christmas Eve in 2013, and in her documents filed in May 2014 she stated, “I am in fear of him and how he will react to these allegations, and am requesting a restraining order.” As a result, Baier was ordered to stay at least 100 yards away from the woman her workplace. A source close to Baier denied the story however, and the woman dropped the order after some time “because she was afraid he would retaliate if she didn’t.” In a tragic update on the case, it has been confirmed that the woman who claimed Baier assaulted her took her own life just six months after filing the papers against him.