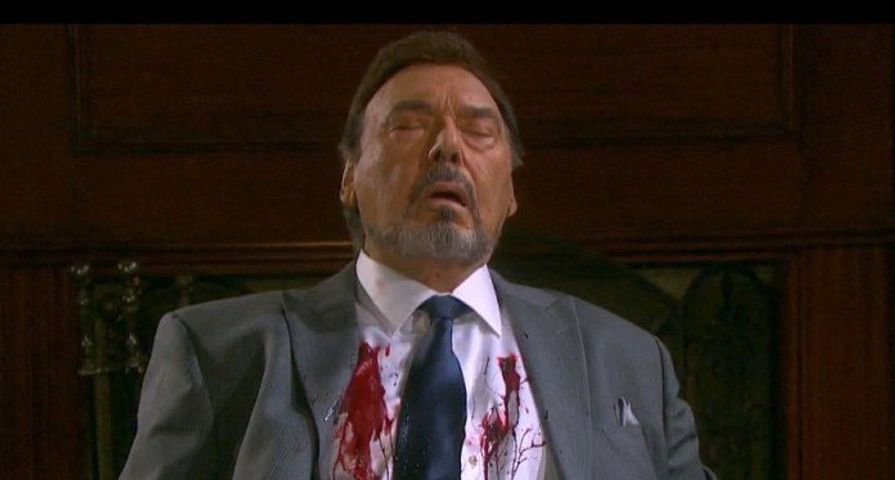 The Young and the Restless’ (Y&R) Skye Lockhart seemingly had nine lives. She faked her own death to help her lover, Adam Newman, in 2008; then in late 2010, with the help of The Moustache, she faked her own death again. Enter a huge storyline in early 2011 that involved sweet, forever-victim, Sharon Newman. Sharon loved Adam oh-so much that she left her kids behind and headed off to Hawaii to prove that he did not kill a seemingly dead Skye. Skye was in fact alive and kicking, and what proceeded was a classic storyline that had massive twists and turns. Confronting Skye at the tip of volcano, trying to get a picture of the vixen to prove Adam’s innocence, Skye ended up (accidently) falling to her death. If that wasn’t ‘plot twist’ worthy, Sharon ended being accused of Skye’s murder, as the entire scenario did seem sketchy. Additional plot twists around this angle included Sharon escaping jail (with Adam’s help), faking her death, assuming another identity, and falling in love with another man (amidst a love triangle between her, Adam, and Nick). She was eventually caught by authorities, and hauled back to Genoa City and jail. Just when fans thought things around this storyline may be over, another plot twist hit, where Adam found evidence that proved Sharon did not kill Skye, and destroyed it. For a while there, this storyline felt like the ‘never ending story’ of daytime drama.

When General Hospital’s (GH) Jason Morgan returned to Port Charles, writers decided his son Jake needed to return as well. This was a little bit harder to pull off, especially since Jake’s death was quite cut and dry, with drunken grandfather Luke hitting the child with a car. What made the situation a lot stickier was the fact that Jake’s kidneys were given to little Josslyn Jacks, who ironically needed them at that same moment in time. Plot twist time! While Carly searches frantically to figure out who the donor was, and how it was all organized, a new character, Nell, seems to have emerged on the scene. However, *spoiler alert* anyone who has watched GH this week may have noticed that since Nell has entered the picture, bio-dad Jax has wanted the investigation into this kidney donor fiasco shut down. Is Nell related to Jax? Did he organize the entire thing? Many, bigger plot twists around this story to come.

5. Melaswen Island – Days of Our Lives

Well over a decade later and soap opera fans are still talking about this incredible Days of Our Lives (DOOL) storyline. Back in 2003, Days of Our Lives hit a bit of a slump in the ratings department. Nothing like a serial murderer stalking residents to help boost viewership, right? Except, the killer was targeting beloved, and long-time fan favorite characters, like Maggie Horton, Caroline Brady, Jack Deveraux, and Abe Carver – amongst others. It felt like Days was killing off all their major cast members … and they were. So, it turns out, at first, that the killer is *gasp* Marlena Evans!? As time goes by, it is revealed that all these characters aren’t dead, and were simply kept hostage on an island (Melaswen Island, new Salem, backwards) by Tony DiMera, and that Stefano had simply used his infamous brainwashing techniques to convince Marlena to kill, kill, kill!

More recently, many fans have welcomed the return of the popular Chloe Mitchell character. Sure, Chloe has always been a tad sketchy, and walked a fine line between good and bad (as well as sane and crazy), but her recent actions have been shocking to say the least. With zero-turned-hero, Adam Newman, recently being hauled off to jail for yet another murder, Y&R fans immediately knew he was being framed – and all arrows pointed to The Moustache. But who was helping Victor and who was locked up in jail? Enter, plot twist, Chloe Mitchell. Sure, Chloe has every right to still be a bit bitter about Adam, and his involvement in the death of her daughter Delia, but framing him for a murder is a bit much. Will her conscience get the better of her? This Victor/Adam/Chloe storyline seems like it may take another turn, but only time will tell.

One of the best DOOL plot twists of 2015 was the return of Bo Brady. Much-anticipated, Bo’s return offered insight as to where he had been all these years, as the character literally disappeared from screens silently and suddenly. He helped save Hope from an evil Aiden Jennings, and was given a hometown hero’s welcome. For internet fans, Bo’s return was not a surprise, but for those who like to pass on spoilers, it was a shocking plot twist in itself. However, what would proceed almost days after his return was even more shocking. Just when Ciara and Hope were reunited with Bo, he died due to a brain tumor. It was nice to see Hope get some closure around her relationship with Bo, and things did end on a good note, but the plot twist of his death was not only quite sad, but it was quite shocking as well.

Not only was this a huge plot twist, but it was also quite ridiculous. Still, when Emily Quartermaine found out she had breast cancer, she wanted to keep it under wraps, especially from boyfriend Zander Smith. She and Nikolas started a ‘fake’ relationship to ease the future suffering for Zander in hopes he would forget about her, and then not have to deal with her health issues and potential death. Plot twist number one: Emily and Nikolas end up falling in love. Plot twist number two: Emily confesses to Zander about her condition, and Nikolas oddly ends up marrying another woman. The storyline takes yet another unique turn, as Emily and Nikolas yearn to be together, yet are with other partners. Then, in a miraculous twist of events, Emily has a dream where she kisses Nikolas, and just like that … she wakes up and is cured of cancer! While medical professionals out there would have some issues with how Emily was able to rid her breast cancer through a dream, it all seemed to work in the world of soap operas.

1. The Death Of Stefano DiMera — Days of Our Lives

For those who love reading their soap opera gossip on the web, the passing of Stefano may not have been too shocking. We all knew that Joseph Mascolo was on the verge of retirement, but still, how the character exited was an interesting plot twist to say the least. While fans knew something was up when Hope went to confront Stefano with a gun and all of the rage pent up within her from Bo’s death, did anyone really think she was going to kill him. Plus, him taunting her didn’t help either. Still, those three shots, and DiMera falling to the ground gave DOOL fans chills and goosebumps. It also signified the end of an incredibly villainous era. #RIPStefano