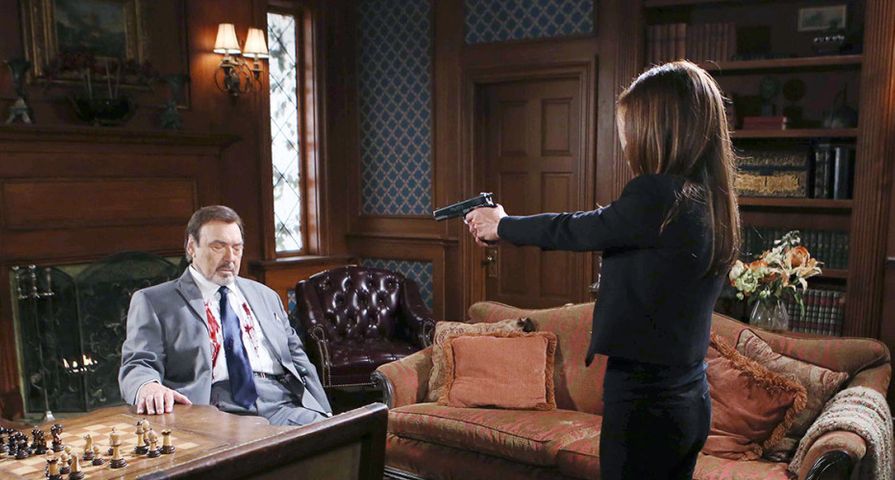 When a character dies on a soap opera, it can turn into a pretty emotional time for fans watching at home, although it does depend on who and how. More often than not, soap fans (especially long-time fans) can see a death coming from a mile away, while other times the passing can come out of nowhere. Below are the top nine shocking soap opera deaths fans never saw coming.

Because of the Internet, many soap opera fans are privy to leaked information or spoilers on the web. Thanks to social media, this information is spread that much quicker as well. Many fans were aware that Shawn Christian was leaving Days of Our Lives (DOOL), but his character’s exit was completely shocking and came out of left field. Yes, his contract may have been up, but killing him off in such a clean-cut fashion pretty much sealed the deal that Jonas would never come back Days which many fans found devastating, since the character was so popular and had tremendous roots in Salem.

He’s alive and well now, but boy, when General Hospital’s (GH) Jason Morgan was shot and presumed dead in 2012, Port Charles was simply rocked and fans were shocked. Jason and Sam were finally going to become a family together with baby Danny by their side, and they all seemed ready to live their ‘happily ever after.’ When Jason ran out to run an errand after taking a cute family photo together with Sam and Danny, what happened next was completely unexpected. Duke, who was actually Cesar Faison, shot Jason and threw him over the dock into the water. For those fans that may have read spoilers, they knew something was coming – but, for those who passed on this, they were utterly floored.

7. Austin Travers – Young and the Restless

Austin Travers wasn’t a long-time Young and the Restless (Y&R) character, and considering the person he was, not many fans shed a tear when he passed away. His death was completely unexpected. Fans knew something was going to go down when Abby Abbott invited friends and family over to the Abbott cabin for a Valentine’s Day party, but a murder mystery was not what most expected. After Fenmore Baldwin placed a drug in everyone’s drink that night, Abby, Courtney, Kevin, Mariah, Noah, Summer and Austin all fell asleep. Everyone (well, except for Austin that is) woke up the next morning, feeling weird. They also discovered that Austin had been murdered, and whoever did it, hid his body in the cabin’s armoire. The murder came completely out of left field and not only shocked these Y&R characters, but also fans at home.

When Bo silently departed from Salem in late 2012, it was clear that not only did Hope need closure on their relationship, but so did DOOL fans. So when he returned, three years later, to save Hope from Aiden, fans were overjoyed to see this legendary soap character back on daytime screens. But his reunion was very short-lived … almost too short-lived. Bo came back, saved Hope, they reunited, he received a hero’s welcome for Salem, and all within a matter of days (pun-intended), he was gone. Not what DOOL fans were looking for when Bo (finally) returned, but at the very least, he was able to add some much-needed closure for Hope.

Everything seemed to happen so quickly on that fateful day in 1994. As a young Maxie Jones was struggling with a heart condition and in need of a transplant, her mom Felicia thought she’d be losing her little girl at any point in the near future. Then what seemed like a whirlwind, Felicia’s niece BJ was rushed to the hospital with fatal injuries due to a school bus accident. She was pronounced brain dead upon arrival at the hospital, and then Tony and Bobby Jones had a hard decision to make. Let go of their little girl to give her heart to Maxie or hold onto to a hopeless situation. This heart-wrenching storyline will forever live in the minds of many long-time GH fans, and was completely unexpected during a time when internet spoilers were non-existent.

4. Sage Newman – Young and the Restless

Some fans are still reeling from this recent Y&R death, that came completely out of the blue. Sage Newman was a newer character to the Genoa City scene, but much-loved by a lot of fans. At the center of a huge baby swap plot, Y&R audiences have been nipping at the bits to see the true identity of Baby Christian revealed. It seemed as if we were finally close to seeing an ending to all this, and then there was a twist in the plot. Sage finally learned the truth, and on her way to spreading the news, she got into a car accident…and died. Shocking and unexpected, to say the least. The bad news is: Sage is gone – with really no chance of coming back. The good news is: Kelly Sullivan (the actress who plays Sage) continues to haunt Sharon…so here’s hoping the truth will come out…and soon!

It seemed that Days was on a bit of a tirade in late 2015 and early 2016 as they axed some of their most beloved characters, left, right, and center. The Necktie Killer took the lives of Serena Mason, Paige Larson and Will Horton while a brain tumor killed off Bo Brady and Daniel Jonas died in a drunk driving accident at the hands of Eric Brady. Finally there was Stefano DiMera, who wasn’t beloved by any means, but he certainly was a character fans loved to hate, and the actor that played DiMera (Joseph Mascolo) has been loved and respected by Days’ viewers over the years for his incredible portrayal of this evil and intriguing character. No one was expecting what they saw in early 2016. After a heated confrontation between Stefano and Hope, where DiMera continued to taunt the beautiful cop, Hope had enough and shot Stefano not once, not twice … but three times. The man referred to as The Phoenix has always had nine lives, but his demise thanks to Hope seemed pretty final.

Back in late 2007, the Text Message serial killer was on a rampage, killing many favorite GH characters. Still, he crossed the line when he axed Emily Quartermaine. It was completely unexpected, as Emily was such a staple in Port Charles and had tremendous ties to many different characters within the show. Perhaps the GH audience knew something crazy was going to go down during the creepy and eccentric Black & White Ball party, which Nikolas threw at the mansion. But nothing was more surreal (and unexpected) than seeing Nikolas weep over Emily’s lifeless body. GH fans were shocked, and audiences still question why such an incredible character, was killed off.

Shocking, unexpected, tragic, emotional, and simply saddening: these are all words that can describe the surprising death of little Delia Abbott in 2013. Y&R fans know the story all too well. What seemed like an innocent and fun storyline around a little girl playing the Wicked Witch of the West turned into a nightmare, every parent dreads. Delia was hit by car driven by Adam Newman and the entire town of Genoa City went into mourning. It was shocking, because of her age and the fact that she was such an integral part of the show. She had just survived cancer only a year or so prior to her death. No one wants to see anything bad happen to a child, not even on a soap and Delia’s death rocked (and shocked) the Y&R and its audiences everywhere.