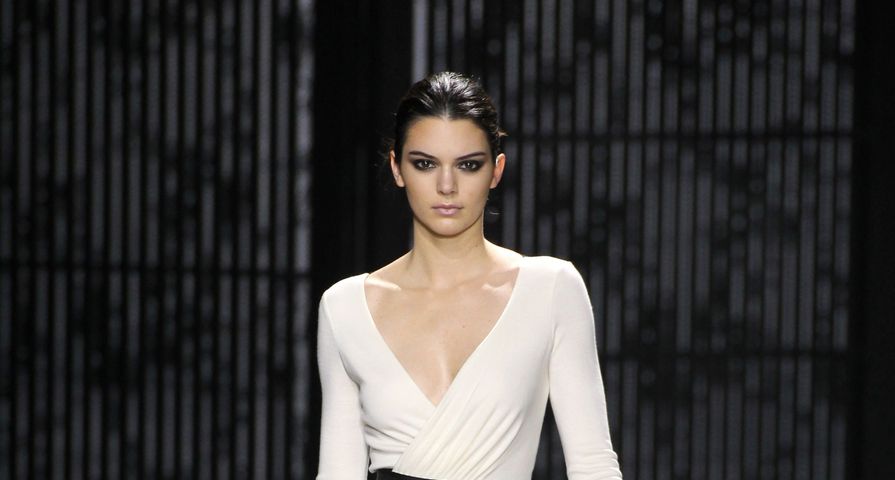 Kendall Jenner started modelling when she was just 14 and since 2009 she’s been rising steadily in the world of print and runways. Ranked among Models.com Top 50 list she has also earned the title of number one most followed model on Facebook and Instagram and the number two most followed model on Twitter. She was the second most Googled model at the end of 2014 and it doesn’t look like she’s going to be slowing down any time soon. Here are Kendall Jenner’s 12 hottest modelling jobs.

When Kendall Jenner was named the new global face of Estée Lauder, she didn’t only land a plump contract — she also boosted the company’s social media following in a fast and furious blast. After making the announcement of her new role, Estée Lauder gained 50,000 new Instagram followers within three days. Earn that contract, cover girl!

Kendall Jenner may have started out with print modelling jobs, but she’s also has made her mark on the catwalk. In 2014, she walked in Milan for Fendi, Ports 1961, and Bottega Veneta, as well as Pucci and Dolce & Gabbana.

2014 was a busy year for Kendall and she spent much of it in Paris. During the spring, she walked for Givenchy and Chanel. In the summer, she was chosen by Karl Lagerfeld to walk again for Chanel. When fall came along, she walked for Sonia Rykiel, Balmain, Givenchy, and (again) Chanel, as well as appearing on the city’s catwalk for H&M.

London hasn’t been left out of Kendall Jenner’s appearances and during the 2015 season she walked the British runway for Giles Deacon who is best known for his fun and playful designs. Kendall hit the runway with her signature smoldering stare and made her mark on the UK.

New York has seen its share of Kendall Jenner and doesn’t look to be tiring of her any time soon. The top model has walked in the big city for Marc Jacobs, Donna Karan, Diane Von Furstenberg, Tommy Hilfiger, Alexander Wang, Vera Wang, Michael Kors, and Oscar de la Renta.

In May of this year, Kendall Jenner announced that she was the new face of Penshoppe, a Filipino clothing store that has established itself as a brand that teams up with “top foreign personalities.” Their past ambassadors have included One Direction, The Vampire Diaries‘ Ian Somerhalder and Nina Dobrev, and fellow hot-models Cara Delevigne and Sean O’Pry.

In April, Kendall Jenner landed on the cover of Harper’s Bazaar and, as if that wasn’t enough of an accomplishment, the gorgeous photos were shot by Karl Lagerfeld. Kendall wore Chanel Haute Couture and said of Lagerfeld, “I’ve actually learned to be a better model…Whenever I shoot with [Lagerfeld], he gives me some tips, little things, pointers. He makes me feel good when I’m working with him—we have good chemistry.”

The same month Kendall Jenner appeared on Harper’s Bazaar also saw her gracing the cover of GQ. Although still one of the younger of the Jenner children, there was nothing juvenile about her spread, which included a whole lotta skin and underboob.

“She is great, the girl of the moment.” Karl Lagerfeld is obviously fond of Kendall Jenner and chose her once again to front his international campaign. This time, for his eyeware collection, Kendall was featured with French model Baptiste Giabiconi who Lagerfeld describes as “like my son.”

“Are You Emotionally Ready to See Kendall Jenner in Her Calvins?” Ready or not, in March of 2015, it was announced that Kendall Jenner was the new face of Calvin Klein Jeans. Following Justin Bieber’s stint with the company, Kendall sported denim and sweats in the campaign she was chosen for not just because of her looks, but because Jenner is a “global marketing force in her own right.”

Back at the beginning of the year, it was announced that Kendall Jenner had landed the “coveted” spot in Marc Jacobs 2015 campaign for spring. In her first ads where she would appear solo, she dropped the heavy makeup and tight threads for the rough-and-tough styled photoshoot that was another notch on her professional belt.

1.1 million people liked the Instagram photo Kendall Jenner released of the Fendi campaign she starred in which was again shot by Karl Lagerfeld himself. However, the pic which showed the popular model wearing a fur coat and clutching a pink Fendi bag was torn apart by critics. Calling it “hands down the worst Fendi campaign I’ve seen…” and a “great collection ruined by a horrible campaign and a bad model,” it may not have been Kendall’s biggest success, but it’s still one of her most impressive modelling jobs to date.