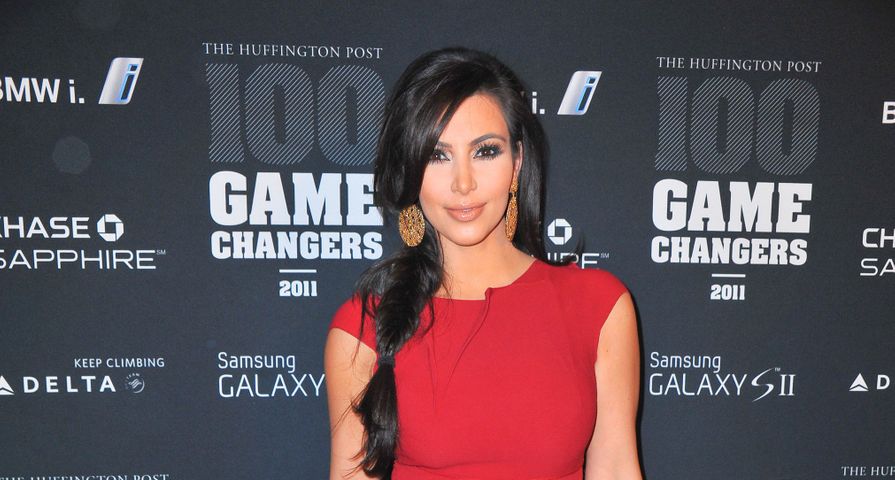 The Kardashians are notorious for risky outfits that tend to push boundaries. They don’t hesitate to show a little skin and are arguably some of the most controversial stars when it comes to fashion. Despite this, the family has also had a surprising amount of modest fashi0n moments that deserve a little credit. The Queen is known for her strict fashion rules so the true test of sophistication is getting her stamp of approval. Follow along for 15 times the Kardashians wore modest, sophisticated outfits that the Queen would actually approve of:

The Queen herself isn’t a huge fan of pants, but Kate Middleton and most recently Meghan Markle have slowly made a tailored pantsuit a staple since joining the royal family. This leads us to believe the Queen doesn’t mind a sophisticated pantsuit every once in a while, so she would likely approve of Kourtney Kardashian’s 2015 black satin jumpsuit. The high neck, luxurious material, and modest hemlines check all the boxes for a polished and refined royal outfit.

Kim Kardashian is likely the riskiest of the Kardashian clan when it comes to fashion, but that’s not to say she’s completely immodest. This particular maternity look would definitely receive the Queen’s approval with its clean, sleek shape and dramatic cape detailing. The look grabs attention, yet is still totally polished, which is clearly a royal style code that the Queen, Kate Middleton, and newbie Meghan Markle seem to follow.

The Queen is all about modesty when it comes to fashion, especially with necklines. Lady Diana paved the way for a more glamorous take on fashion and made one-sleeve and off-the-shoulder necklines an acceptable royal look. With this in mind, we’re sure that this sleek one-shoulder look that Kim Kardashian wore to the 2010 Jill Stuart fashion show would be approved. The look is sophisticated, simple and totally modest, yet she added her own flair by rocking a pop of magenta on her lips.

The Queen loves bold colors and lace when it comes to her wardrobe, which is why we’re certain she would love this red dress Kim wore to The Mirage in 2013. The look has all the components of a winning royal look — a high neckline, delicate lace, a statement color palette and a modest knee-length hemline. She looks totally sophisticated and powerful, which is exactly the style many of the royals exude.

Satin is a beloved texture within the royal family, especially with Lady Diana and Kate Middleton! The texture is luxe, rich and totally eye-catching. This satin look Kim wore in 2013 is not only made of satin, but it’s also a bright shade of mustard yellow, which fits the royal fashion uniform. The dress is totally modest with a knee-length hemline and cowl neck, but even more so since she added a matching wool duster coat on top.

Kourtney Kardashian stepped out in a stunning coral dress for the 2011 Kids’ Choice Awards that we’re quite certain the Queen would approve. The flowy, sophisticated dress looks exactly reminiscent of something Kate Middleton would wear for a public engagement during the summer months. The silk chiffon is light and flowy and the color choice was perfect for her skin tone.

Kim Kardashian looked totally sophisticated when she stepped out at the 2011 premiere of Unknown wearing this white jacket and trouser combo. The jacket was actually quite reminiscent of something the ever elegant Audrey Hepburn would wear with its high-neckline and clean shape. The look was modest, put together and worked well with her polished updo.

Kim Kardashian looked seriously stunning when she wore this sleek mermaid shape gown for the 2011 Game Changers Awards Ceremony. The dress was surprisingly quite modest and featured a high, cap sleeve neckline and a floor-sweeping hemline. We love how simplistic this dress is but how she brought the drama with her messy side braid. The sleek, classy look is definitely something that would be Queen-approved.

This blue satin dress Kim Kardashian wore in 2014 looks like something straight out of Princess Diana’s playbook! Lady Diana was a huge fan of rich textures and thick choker necklaces, which is exactly what Kim wore to the 2014 LACMA Art & Film Gala. The neckline is modest and the luxurious satin texture is definitely right up the royal alley when it comes to fashion.

This Kim Kardashian look is nearly identical to a look Meghan Markle wore recently for an official public engagement with Prince Harry. Trousers haven’t always been a favorite among the Royals, but both Meghan Markle and Kate Middleton seemed to have changed that tradition with their progressive fashion tendencies. A sophisticated pantsuit is a great way to look polished and clearly both Kim Kardashian and the Royals understand that!

Kylie Jenner looked stunning in this sleek charcoal dress she wore back in 2013 for The Hunger Games premiere! The look was actually quite sophisticated and modest when it comes to color and shape. The dress fit her like a glove and showed off her figure without showing skin, which is key for red carpet dressing! Although we’re not totally sure the Queen would approve of her combat-style boots, we definitely think she would be a fan of this sleek dress.

Kim Kardashian wore a flattering cream-colored dress for the 2011 VH1 Do Something Awards, which turned heads for all the right reasons. The dress hugged her curves but in a modest way that flattered her figure without showing too much skin. The gold belt detailing emphasized her tiny waist and the polished updo was the perfect choice to compliment the look. We can definitely assume the Queen would approve of an elegant dress like this!

Kate Middleton Looks That The Queen Wouldn't Approve Of

In 2017 Kim Kardashian went the modest route with her Met Gala look and we think she looked absolutely flawless. The off-the-shoulder neckline is a well-loved trend among the royal family and we’ve seen similar cuts on Lady Diana, Kate Middleton, and Meghan Markle. The dress fit her body like a glove and flattered her figure simply by its shape, which is key with sophisticated and effortless dressing.

Kourtney Kardashian definitely knows how to dress up a suit in the most fashionable way possible. Rather than a dress, Kourtney opted for a trouser look for the 2014 Oscar’s viewing party. The pussy-bow detailing added an element of class and is a trend we’ve seen numerous royals wear for public engagements, so we’re certain this outfit would be a surefire hit with the Queen.

One of Kim Kardashian’s most memorable looks is the crisp white gown she wore to the 61st Primetime Emmy awards. The dress featured a flattering one shoulder neckline which was a go-to for the ever stylish Princess Diana. To top the look, Kim held a small clutch in her hand which is a staple handbag style for Royals. We love this outfit and were certain the Queen would approve as well.