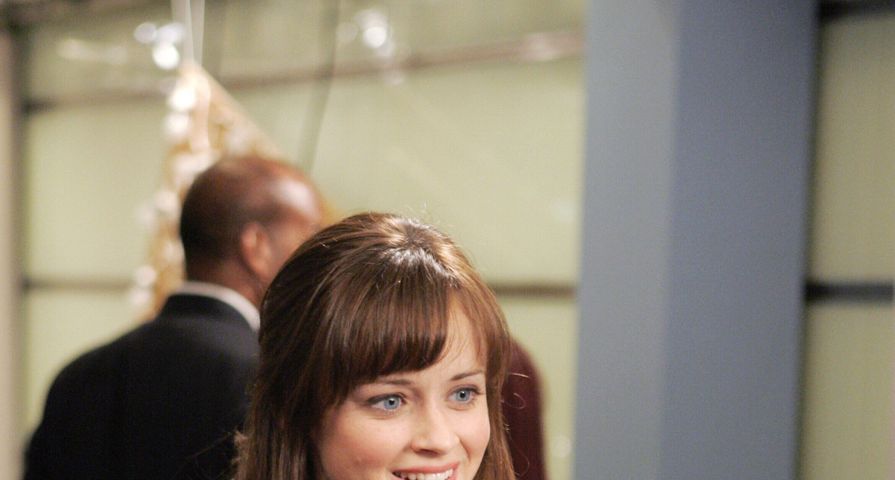 Gilmore Girls is coming back! The new Netflix reboot called Gilmore Girls: A Year in the Life will be released on Nov. 25 with more episodes of the beloved drama starring Lauren Graham and Alexis Bledel. There are so many questions we are excited to have answered like: Will Rory be married? Single? Living outside of Stars Hollow? We’re so stoked about the new limited series that we decided to reminisce about our times in Stars Hollow. As the show ran from 2000-2007, it featured many heartwarming stories — and some silly or frustrating ones, too. Here are 10 of the most ridiculous storylines on Gilmore Girls:

After a while away, Rory’s father, Christopher, comes back into Rory’s life in season 5. He’s inherited a bunch of money and wants to take over paying college tuition for Rory, who’s attending Yale. But should they take his money, when he hasn’t always been there for Rory, and when he and Lorelai have such a complicated romantic past? This is one of those rich people problems stories that only happens on Gilmore Girls. Oh no, Christopher has a bunch of money! What should they do? First it’s Rory’s rich grandparents, then it’s Christopher — people always seem to magically have the money for fancy schools on this show.

9. When Rory and Logan Stole a Yacht

Another ‘rich people’ storyline on Gilmore Girls took place when Rory stole a yacht at the end of season 5. Who knows someone who has a yacht to steal, anyway? It was nice to see that Rory at least had to face some consequences for her actions (she got slapped with 300 hours of community service), but she was also able to benefit from the counsel of her grandfather’s attorney friend — how convenient, right?

8. Rory Drops Out of Yale and Lives in a Pool House

Rory has to be one of the more privileged, ungrateful characters we’ve seen on TV. After the yacht incident, Rory gets in a big fight with Lorelai and they stop speaking for a while. Rory goes to live in her grandparents’ pool house (how convenient!) while she does her community service over the summer. But what’s even more ridiculous is that she drops out of Yale, the school she worked so hard to get into while she was in high school at Chilton. Rory turns into a full-on brat, but perhaps that’s realistic for someone her age.

7. Pretty Much All of Season 7

One of the saddest things about Gilmore Girls is that its final season is definitely its worst. (Another reason to be cautiously excited about the new episodes coming!) In season 7, Lorelai and Luke are mad at each other and barely speak, even though we all know they’ve gotta work it out and get together by the end. Lorelai wakes up in Christopher’s bed in the season premiere — don’t you hate Lorelai and Christopher together? The whole season felt like the show was on hold.

In “Concertus Interruptus,” Lorelai and Sookie plan to take Rory and Lane to a Bangles concert (in 2001, not 1986). But when Lane’s mom finds out their plans, she bans Lane from going, so Rory goes with Madeline, Louise, and Paris instead. Once there, the girls sneak off to meet some boys and the whole episode turns into a cheesy moral lesson. Lorelai finds them and judges them for drinking things that could be drugged (always blame the victim!) and says she’s going to have a long chat with everyone’s parents. Not cool, Lorelai! Not to mention the fact that Lorelai spends the whole episode childishly stressing about whether Luke’s ex-girlfriend was pretty or not.

5. When Rory Slept With Dean

Maybe this one isn’t “ridiculous,” but it frustrated many viewers. In season 4 episode 22, titled Raincoats and Recipes, Rory loses her virginity to Dean, even though he’s married to Lindsay. He and Lindsay have been having problems, so he does the mature thing and turns to Rory, the ex-girlfriend he’s never really gotten over. In one way, this development was good because it showed fans that Rory wasn’t always so perfect — she can make big mistakes and learn from them. But in another way, it was a frustrating story that re-hashed a love interest who didn’t work in the first place.

4.  When Emily Sabotaged Luke and Lorelai

Lorelai’s mother Emily is always one of the funniest characters on the show, since she’s completely unafraid to speak her mind. But as the show progressed, Emily got so difficult and opinionated you could even call her downright mean. She actively tries to stop Lorelai from dating Luke because she thinks he isn’t good enough for her, even though Lorelai is clearly in love with him and happy. Emily schemes to try and get Lorelai back together with Christopher, sabotaging Lorelai’s relationship with Luke in the process. It’s one thing to disapprove of your daughter’s boyfriend, but it’s another thing to ruin her happiness because of it.

3. Jess Is Awkward in California

Season 3, Episode 21 of Gilmore Girls, titled “Here Comes the Son,” feels like an entirely different show – for good reason. Intended as a potential spin-off show, it follows Jess as he goes to California to track down his deadbeat dad. But if feels so out of place in the Gilmore Girls universe, and it’s just awkward: Jess won’t take off his trademark black leather jacket, despite being surrounded by short shorts and bright California sunshine. But even worse is that Jess seems to have no plan for what to do with himself.

Panned by many as the worst episode of Gilmore Girls ever (except for that whole season 7 thing), “Secrets and Loans” (season 2, episode 11) establishes that Lorelai’s house has termites that will cost her $15,000 to fix and that Rory doesn’t approve of Lane becoming a cheerleader. Emily finds out that Lorelai needs some money and offers to help co-sign a loan, which ignites all the same old fights that Lorelai and Emily have always had about Emily’s involvement in Lorelai’s life. Boring! And all over a bunch of termites! Unfortunately, the show followed up this episode with “Richard in Stars Hollow” (season 2, episode 12), which features Lorelai’s dad getting bored and coming to Stars Hollow, where he does nothing but judge all of Lorelai’s decisions.

And finally, here’s our biggest pet peeve of Gilmore Girls: All the boys love Rory, especially at the beginning of the series. Dean is obsessed with her, and though he’s a little boring, she ends up rejecting him for no good reason. Hot prep-school boy Tristan loves her. Tortured bad-boy Jess loves her. That nerdy guy at Yale loves her even though she kind of uses him (at least she figures this out eventually). Then, the guy on Spring Break flirts with her. Logan loves her — and to be fair, their relationship has its ups and downs, and Logan’s not always a good boyfriend —  but she still has the choice to dump him in the end. Doesn’t Rory ever get rejected by anyone? Has she ever experienced unrequited love? As a teen girl watching the show,  it was nice to see a girl who was proud to be bookish and didn’t change herself for a guy, but it was hard to relate to someone who constantly had suitors lining up for her.