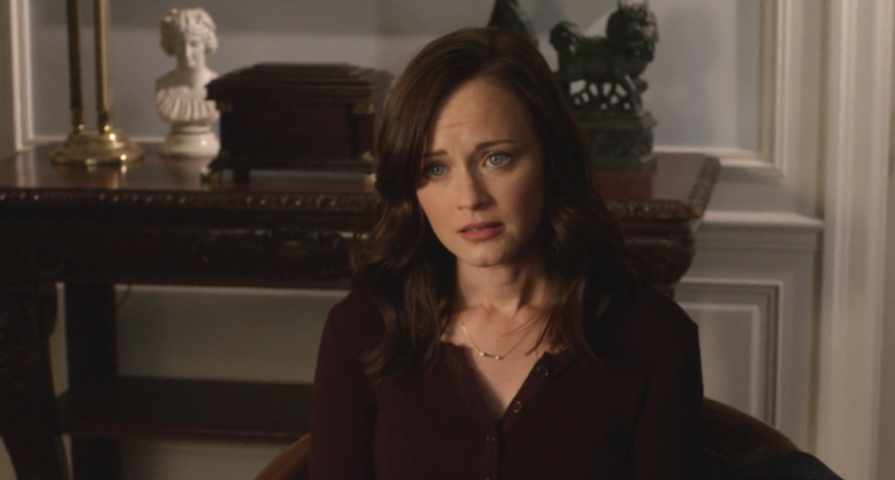 With Gilmore Girls: A Year in the Life, we were expecting all of the storylines to be neatly wrapped up at the end of the fourth episode, but that’s not we got. Instead, we got a big bombshell – Rory’s pregnant! – with absolutely no closure. We need more episodes pronto, so these seven storylines can be wrapped up:

Paris and Doyle are going through a big divorce in the revival series, which totally sucks. If there were ever two people that were meant to be, it was these two. They are both driven and stubborn, which may have caused some conflicts in their relationship, but they also have two kids and a ton of history. We want these two to work it out. They need to call off the divorce and accept the fact they are meant to be. There is no one better for Paris than Doyle and no one better than Doyle for Paris.

In the last episode, we see Lorelai go to Emily to see if she can use the money from Richard’s will that was allotted to Luke to expand The Dragonfly. Emily acquiesces, but we don’t see Lorelai expand her beloved bed and breakfast. We know from the third episode that Michel is planning on leaving unless they can expand The Dragonfly, so we need this plotline resolved.

After a conversation with her ex, Jess, Rory decides to write a book about her relationship with her mother but, when the fourth episode ends, she only has a few chapters of the book written. We want to see her finish the book or at least see what happens once she’s completed it. Does she publish the book? Does it make her a ton of money? We need these questions answered!

In the first episode of the series, Luke and Lorelai are looking into using a surrogate so that they can have a child together, but they abandon the idea pretty quickly because Luke isn’t into it. In the fourth episode, Luke and Lorelai finally get married, which has us wondering – will they decide to have kids? In an interview with Entertainment Tonight, Scott Patterson seemed to indicate that Luke and Lorelai are now going to have kids, so we want to see it!

At the end of the fourth episode, Rory and Jess run into each other as he’s leaving. She excitedly shares the news that she already has a few chapters of her book complete and then runs into her mom’s house. He watches her through the window on the porch with this longing expression, which seems to indicate that he’s not over her. This potential relationship needs to be explored.

2. Rory’s Job at the Gazette

Rory spends the vast majority of the four episodes living in Stars Hollow, trying to figure out what she’s going to do with her life. After her book deal falls apart with the eccentric Brit Naomi Shropshire, she seems even more lost. She gets a gig with the Stars Hollow Gazette, but it’s unpaid. It seemed like the whole point of this storyline was to show Rory revamping the old school newspaper and turning the unpaid editor job into a viable career, but that didn’t happen. We want to this storyline to go somewhere. We’d prefer to see her succeed in turning the Gazette around but, if not, we want to see how that plays out too.

The fourth episode ends with Rory telling her mother that she’s pregnant, but she doesn’t say who the baby daddy is. Using our deductive reasoning skills it seems pretty clear that the father of her child is probably Logan. She hasn’t seen Paul since the first episode; in the second episode she hooks up with the guy in the Wookie costume; and in the fourth episode she spends the night with Logan, so obviously it has got to be him. We need another few episodes to confirm that. Will she tell him, even though he’s engaged to Odette, that she’s pregnant? What kind of role will he play in Rory’s child’s life? We need answers!