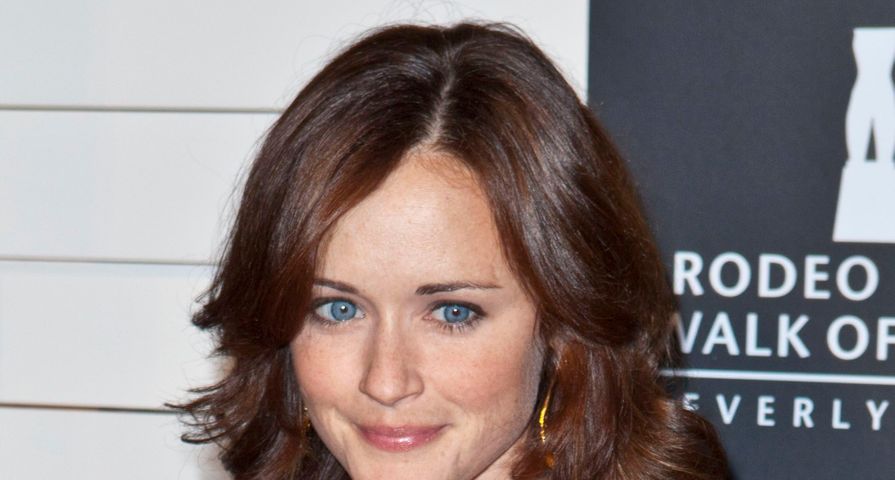 Alexis Bledel is one of those celebrities who has been famous for over almost half of her life, but she is still somehow able to carry an air of mystery about her. That’s because she purposely keeps her private life really private, which keeps us constantly guessing. She’s celebrating a birthday, so we have 9 things you didn’t know about the former Gilmore Girls star:

Kimberly Alexis Bledel was born on September 16, 1981 in Houston, Texas, to Nanette, a gift processor and flight attendant, and Martín. She has one younger brother named Eric. She grew up in a Latin American household speaking Spanish. Her paternal grandfather was born in Buenos Aires, Argentina, and was of Danish and distant German descent while her mother was born in Phoenix, Arizona, but moved to Guadalajara, Mexico, when she was eight. Alexis didn’t actually learn to speak English until she started school.

The Gilmore Girls actress is known for her shyness. When she was eight years old, her parents got her involved in community theatre to overcome it. She appeared in local productions of Our Town and The Wizard of Oz. While this has helped to take her out of her comfort zone, she’s still a shy person. “I’m still a shy person. I’ve learned to put that aside on certain occasions. I have to. It’s part of my job,” she said.

At the age of 14, a modeling scout discovered her at a local mall. Through high school, she modeled around the world and took her senior year off to focus on her modeling career. During that career, she encountered people who would tell her to lose weight, but she just ignored them. “When I was modeling as a teenager – which is probably the most sensitive time of a person’s life,” she said. “I just ignored it when people said to lose two inches off my hips. I had more jobs than I could take because I was in high school, so why would I even want more jobs?”

When Alexis landed the role of Rory Gilmore on Gilmore Girls, she had no real acting experience. “I had decided to pursue acting, like, six months before I think this show got picked up. So it was really overwhelming and really lucky. Complete shock to the system because it went on for so long and I had to learn so much so fast,” she told NBC’s Today Show. However, according to the show’s creator, Amy Sherman-Palladino, Alexis had exactly what they were looking for. “It was just one of those young, beautiful faces. We were trying to find someone new, someone interesting. There was something about her. In person she was very shy and quiet, not this vivacious energy, just very simple and pretty,” she said.

The Post Grad star attended New York University’s Tisch School of the Arts for one year to study film. While there, her agent from her modeling days would send her on auditions, which is how she landed her gig on Gilmore Girls. She went to the audition thinking that at the very most it’d be a way to earn some extra money but, when she landed the job, she had to drop out of school and commit for the next seven years. Initially, she found the experience overwhelming. “I was completely overwhelmed,” she said. “At the time, I was just like, What do they want from me? I was working 18-hour days, and weekends too. I didn’t even know the basics about acting! There would be a scene where I’d have to cry and I’d be like, How do I do that?” she told Crushable.

Although they were open about the fact that they were dating and that they were engaged, Alexis and Vincent Kartheiser secretly married in June 2014 in Ojai, California. “It was a small and intimate family affair,” a source told Us Weekly. “They wanted something relaxed and beautiful. Ojai was the perfect place. His family flew out from the East Coast.”

Somehow the Sisterhood of the Traveling Pants actress managed to keep her pregnancy and the birth of her son a secret throughout all of 2015. It wasn’t until her Gilmore Girls co-star, Scott Patterson, accidentally spilled the beans to Glamour in 2016 that the secret got out. “She’s really blossomed as a woman and now she’s a proud new mother and married and happy,” he said. “We’re comparing notes because my son [Nick, born July 2014] is about a year and a half older than her young son. I’m showing her photos and videos and what to expect. We’re just really enjoying each other’s company.”

The Jenny’s Wedding actress tends to renovate properties when she’s not acting. “It’s fun for me, because it’s creative and I can kind of control it. My job is very out of my control a lot of the time, because I don’t want to get into like producing movies, although we are trying to make another Sisterhood movie,” she told Nylon magazine.

Before settling down with Vincent Kartheiser, she dated her Gilmore Girls co-star and on-screen love interest, Milo Ventimiglia, from 2002 to 2006. When it came to their relationship, she kept mum, giving little away; however, rumor has it that he wasn’t the best boyfriend and was spotted in public calling her a c-unt and pushing her. After that relationship, she dated model John Paul from 2010 to 2011.