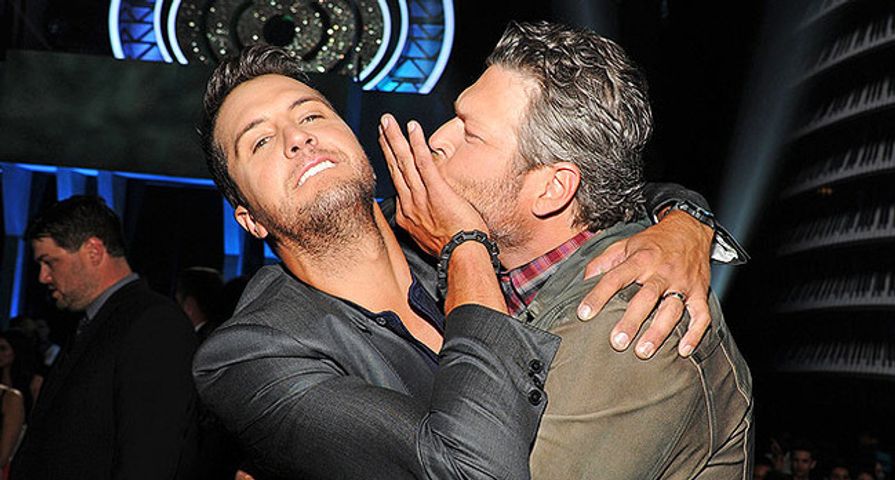 Country artists often refer to their genre as a ‘family’ because it’s so small with few successful mainstream artists, so they all become extremely close knit. Many of the artists end up getting to know one another really well after either touring together, partying at award shows, or even writing songs together. A few of these friendships even started back before they were famous! Turns out Nashville is a small world. These friendships are so close that have most certainly developed into what we deem a “bromance.” These country crooners are constantly pulling pranks on one another, cracking jokes at each other’s expense and just overall getting up to no good. This list takes a look at 8 of the best country music bromances:

Randy Houser and Dierks Bentley have both been playing country music for quite a while and as a result have become pretty close friends. But an even newer addition to Randy’s group of friends is Florida Georgia Line’s Tyler Hubbard. Not many people knew just how close these guys were until a few days ago when pictures emerged of Randy Houser’s wedding in Nashville from back in May when he tied the knot with now-wife, Tatiana Starzynski. Being in someone’s wedding party is the biggest honor for a friendship and true solidification of a bromance and standing by Randy’s side as he exchanged nuptials were Dierks Bentley and Tyler Hubbard! When asked about his wedding and some of the country star sightings, Randy said “They’re all like brothers to me.” Tyler Hubbard was also spotted celebrating at Randy’s bachelor party!

Country artist veteran Luke Bryan took Thomas Rhett under his wing when he started making music — so much so that Thomas Rhett credits Luke Bryan for giving him that extra push to propose to his now wife, Lauren Gregory! Thomas’s father is singer-songerwriter Rhett Atkins; he said everybody was telling Thomas not to get tied down at such a young age, but it was Luke who told him to go for what you want. “Everybody told him no, this is not what he should do — except Luke. He called Luke three or four times and Luke was like, ‘Buddy, if you’re in love and you want to get married, then do it.’ I think Luke was a huge part of Thomas Rhett going, ‘Hey, I can do this.'” Luke Bryan has definitely been Thomas Rhett’s confidant throughout his recent success. Rhett told CMT that he confided in Luke Bryan before he released his album as well, “I was actually talking to Luke on the phone the other day. And Luke was like, ‘Man, did you have a good time in the studio recording it?…Did you have a good time playing them live?…Do most people love it?” When Rhett answered yes to all his questions, Bryan said, “Well, then, what are you worried about?” Sounds like Rhett’s got a good thing going with Luke Bryan as his mentor in the music biz!

These two country crooners are good buddies who are known for their prank wars. The pranks started in January 2015 when Dierks Bentley made Kip Moore jump into an ice cold lake to announce his upcoming tour which Moore was an opening act. Later that month, Kip decided to get his revenge by ‘trashing’ Dierks beloved truck he calls ‘big white.’ He filled the truck with foam peanuts, did some fancy graffiti work all on the outside of the truck and to top it all off he filled the back with hay and left a billy goat in there! Kip Moore definitely set the bar high with this one before they headed out on tour together. In an interview with Radio.com, Dierks said: “The prank they pulled, they put plastic over my truck, and then they spray-painted over the plastic. Well, when they pulled the plastic off, the spray paint had reacted with the glue and it left the words. I’ve been driving around with the word ‘Payback’ on the side of my truck for a month and a half…[Kip] has been calling me, ‘Man, am I kicked off this tour? I feel so bad…’ [But] it’s all good. I got three kids. I don’t sweat the small stuff. I love Kip, man. He’s a great dude.” It takes a strong friendship to forgive some of the pranks they’ve pulled on each other!

These two artists not only share a birthday together, but they are also labelmates and great friends! Thomas Rhett and Justin Moore can often be found golfing together, hanging out, photobombing one another, running into one another on vacation and even swapping hats. They almost seem more like brothers than they do friends! Thomas Rhett and Justin Moore even have a single out with fellow country artist, Brantley Gilbert called Small Town Throwdown. The single came out in 2014 and became a huge hit! One of the biggest factors of their friendship  is that these two started out in the biz around the same time, they were both up for New Artist of the Year in 2014 and most good friends, these two were rooting for each other. Moore said in an interview, “I’ll tell you who I want to win: Thomas Rhett. We are really, really good friends. I don’t really know the other guys. And I’m not saying they don’t deserve it. They do. But personally, I’m pulling for T.R. He’s in a different lane right now than most people, and he’s making that work. More importantly, he’s just a really good person, and I have a lot of respect for him.”

Playing a little golf with @justincolemoore #godawgs… Football season right around the corner   A photo posted by ThomasRhettAkins (@thomasrhettakins) on Aug 17, 2014 at 9:13am PDT

Believe it or not, Cole Swindell started out as Luke Bryan’s merch guy! Their friendship dates really far back. Swindell first met Bryan when he was still in college at Georgia Southern University, a school Luke Bryan attended just a few years prior to Swindell. When Swindell was in college, Bryan had already moved to Nashville to pursue a music career, but the two kept in touch. When Swindell eventually graduated and moved to Nashville, Bryan was in need of a merch guy so he hired on Swindell to do the job. At the time, Luke Bryan was touring with Florida Georgia Line and Swindell used his time on the road to write songs. While on that tour he wrote the following songs, “Beer in the Headlights,” “Love in a College Town,” and “Shore Thing.” He also wrote the song Thomas Rhett now sings, “Get Me Some Of That,” Scott McCreery’s “Water Tower Town” and FGL’s “This Is How We Roll” with Luke Bryan. He then wrote his now hit song “Chillin’ It” which is the song that earned him a record deal. Swindell has co-wrote and even written on his own a lot of Luke Bryan’s biggest hits like “Crash My Party,” “Beer in the Headlights,” “Roller Coaster” and “Out Like That.” Swindell is definitely a good friend to give up those songs to Bryan!

Brian Kelley and Tyler Hubbard are an easy guess for this list of country music bromances because they are practically brothers! Making up the popular duo known as Florida Georgia Line, these two met while attending Belmont University in a campus worship group. Kelley and Hubbard started playing guitar and writing songs together, eventually realizing they wanted to pursue a career in music so they began touring around the South playing shows together until they were discovered by Nickelback’s producer, Joey Moi. Today, these two pretty much spend all of their time together! Brian and Tyler are on the road together touring, writing music, attending award shows — they are inseparable! And it’s for the best because they’ve become one of the most successful acts in country music with their single “Cruise” being the best-selling digital country song of all time in the U.S. and an annual income of $36.5 million — that would solidify any friendship!

Tim McGraw and Kenny Chesney are what they call ‘ride or die’ friends. Friends for over 21-years, they’ve gone on tour together numerous times and been there through thick and thin throughout each others careers. Tim and Kenny have each others back no matter what and this was evident during a concert in Buffalo, New York when they were both arrested and thrown in jail! No bromance is complete without a night in jail together — it’s like something out of a movie! The story dates back to 2000 when Chesney asked the daughter of a sheriff if he could ride his horse, but once he was granted access, he rode away ignoring the officers orders to stop. Two officers tried to pull him off and that’s when McGraw and his manager got involved and a scruff broke out between them all. The three men were arrested and released on bail a few hours later. The New York State tried to push second-degree assault charges against the country crooners, but a year later when they all got their day in court, a judge freed them of all charges. Hopefully these two stay out of trouble….for now!

No one is surprised to see ‘Bluke’ in the number one spot on this list. These two country artists are veterans in the industry and throughout their careers they have not only competed with one another, but have become quiet good friends along the way. Blake Shelton and Luke Bryan form the ultimate bromance and we’ve all known it for years! Blake Shelton has recently moved onto a new bromance with fellow Voice coach, Adam Levine, but Luke Bryan was the original BFF and always will be. Similar to the relationship between Adam and Blake on The Voice, Luke Bryan and Blake’s friendship was all about teasing one another and cracking jokes at the other’s expense. Luke Bryan and Blake Shelton’s friendship goes pretty deep, from Blake constantly trying to lay a big kiss on his fellow country artist, to pulling pranks on one another, to hosting the ACM Awards three years in a row — it’s always guaranteed to be all laughs when these two are involved!