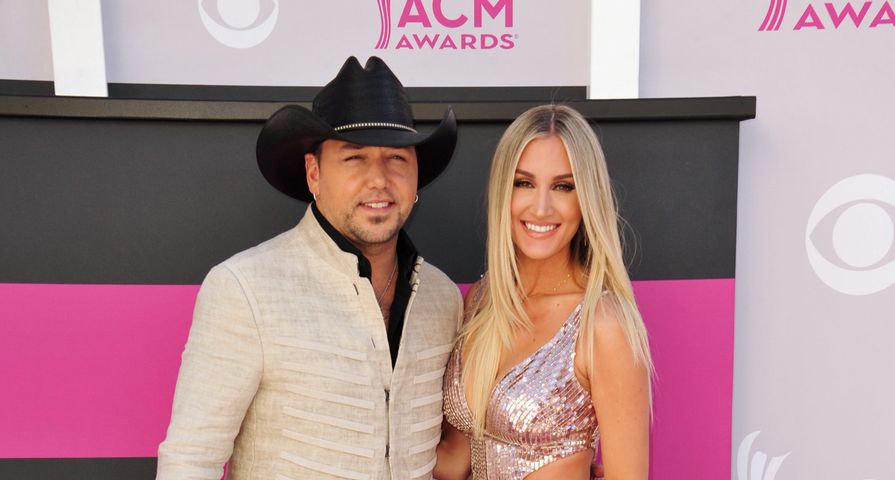 Jason Aldean and Brittany Kerr have one of the most controversial relationships in country music. The “Any Ol’ Barstool” singer made his public debut with the former American Idol contestant back in June 2014, and by September they were engaged! They officially tied the knot in March, 2015, and although many doubted how long their relationship would last, they’re still going strong and happier than ever! In fact, they recently announced they’re expecting their first child together, a baby boy! In celebration of all this, here’s a look at 8 things you didn’t know about Jason Aldean and Brittany Kerr’s relationship!

Brittany Kerr and Jason Aldean got hitched in a destination wedding less than a year after going public with their relationship, but it seems newly wed life was a breeze for them! When asked about adjusting to their new life together, Aldean said admitted there wasn’t much of an adjustment to be made. “So far, so good, man. We’re like a week and a day in. We’re still at it so I guess that’s a good thing,” he joked in an interview with E! News. “We were already living together and it kinda felt like we were married anyway. We were kind of living the married life anyways so for us it was kind of just going through the formalities of it all. It was nice to do that and kind of make it official. It’s bee a good week.”

These two didn’t need to plan much of a honeymoon considering they’re always on the road due to Aldean’s crazy schedule. After they got married in March 2015, they traveled around Europe for his Burn It Down tour. “I feel like our life is a honeymoon,” he said in an interview with People. But he did admit if he wasn’t so busy, they would have preferred to escape somewhere with sand and sun: “Take me to the beach and hang out for the month and I’m good.”

Even though Kerr is married to one of the biggest stars in country music, she’s not a huge country music fan. While she does really like his songs like “Lights Come On,” “Burnin’ It Down,” and her three favorites, “All Out of Beer,” “A Little More Summertime,” and “In Case You Don’t Remember,” she’s more into R&B music. “Her and I have different tastes in music for sure,” said Aldean to Taste of Country Nights’ Sam Alex. “She’s a lot more of like an R&B fan, more pop R&B type stuff. She’s not a big rock ‘n’ roll fan.”

In May 2017, Kerr and Aldean announced they are expecting their first child together. A few days later they used Instagram to reveal that it’s going to be a baby boy due later this year! Expanding their family has always been something they talked openly about. Not long after they tied the knot, Aldean told People it would be happening in the near future. He said: “In the next couple years, probably, we definitely want to have kids.” Kerr is a step-mother to Aldean’s two daughters, Keeley, 12, and Kendyl, 7, whom he shares with his ex-wife Jessica Ussery. On December 1, 2017, they welcomed their son Memphis Aldean Williams.

In an interview with Rare Country, Jason opened up about how his wife Kerr has made him into a whole new man. He is much lighter and willing to open up with fans. “I give her a lot of credit for making me open up a little more when it comes to social media and stuff like that. I’ve always kind of been pretty private and, I don’t know, I’ve just always been weird about that stuff. I’m like, ‘I don’t think people care what I’m having for dinner. I’m not going to take a picture of it, they don’t care about that stuff.’ And she just has fun with it,” he said.

Their favorite things to do on days off is binge watch TV shows. Kerr’s number one choice is The Kardashian’s shows, which he admitted he knows more than he ever cared to know about any of them. “Don’t let him fool you, he likes it!” she joked. Both admitted that they love any kind of mystery show, crime-related show like Date Line or 48 Hour Mystery, or even things like Shark Week.

Jason Aldean has admitted that being with Brittany has made him more open to sharing things with his fans on social media, and it’s true! During some downtime on the tour bus, the cute couple did a little Q&A for their fans. “Animal lover and a hunter. She’s like an animal lover, for real. So obviously I hunt, we have a hunting show, so we just came to an agreement…I don’t hunt at our house,” he said. She then quipped, “It kills him because there’s like a million deer and a million turkeys and he can’t do anything!”

Most country music fans remember the scandal that ensued back in September 2012 when Jason Aldean was caught locking lips with Brittany Kerr at a bar in L.A. At the time he was still married to his wife of 11 years and high school sweetheart, Jessica Ussery. At first Aldean apologized for his “lapse in judgement,” but in April 2013, he filed for divorce and made his public debut with Kerr at the CMT Awards in June 2014. The two came under a lot of scrutiny for seemingly breaking up a marriage and many people didn’t think their relationship would last, but Aldean and Kerr kept a united front and Aldean continuously defended himself and urged people to move on.