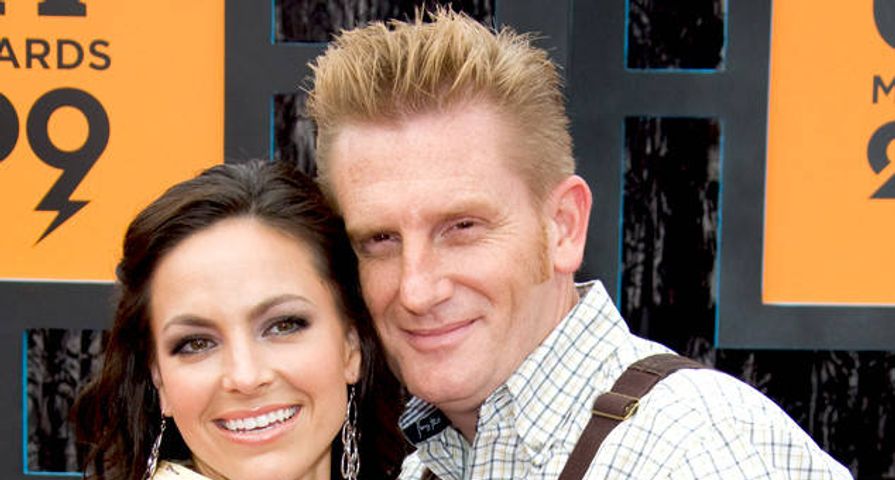 Joey and Rory Feek were one of the cutest couples in country music. The couple formed the musical duo Joey + Rory after competing on the CMT’s Can You Duet back in 2008. Between then and 2016 they recorded eight studio albums, charted three singles on Hot Country Songs, and earned several award nominations, including two impressive wins — an ACM award in 2010 and Grammy award in 2017! Sadly, Joey Feek passed away in March 2016 at the age of 40. At the time of her death, Joey and Rory had been married for 14 years. In memory of their sweet love story, here are 14 things you probably didn’t know about their relationship!

The first time they met was more of a passing than an official meeting. Joey was an audience member during a songwriter’s night at the Bluebird Cafe when Rory Feek performed. They never officially met that night, but Joey definitely took notice of her future husband. During his performance, he introduced his two daughters to the audience, so she assumed he was married. It wasn’t until two years later that they were officially introduced and exchanged words.

We see it in the movies all the time, but it rarely happens in real life, except for that fateful night at the Bluebird Cafe. Joey laid eyes on Rory for the first time ever and immediately fell in love. “Rory was singing ‘In the Round’ at the Bluebird Cafe in Nashville with three other songwriters. I was just one of dozens of people in the audience that night. From the first song Rory sang, I fell head over heels for him. I didn’t even know him, but something inside me said, ‘You’re going to marry that man and spend the rest of your lives together,'” said Joey.

Even though Rory had unknowingly seen his future wife in the audience at the Bluebird Cafe, he didn’t actually meet her until one night at the Pearl’s Palace. At time, he was a weekly songwriter who was setting up his show for the night when a dark-haired woman crossed his path. This time he definitely took notice of her. He even noticed how she returned the following week, and then somehow joined up with his friends after the show as they walked back to his songwriting studio. While at the studio he learned she had a record deal and was looking for songs to record, so he offered to play a few for her. As Rory recalls in his memoir, she acted very standoffishly, and instead of listening to him play, she told him to mail them to her P.O. box and left.

When he looked at the piece of paper she had handed him he noticed that in addition to an address, there was a phone number. He called, left a message, but didn’t hear back. Even though he was pretty sure she wasn’t interested he called one last time. To his surprise, she called him back! She then proceeded to tell him why she’d been acting standoffish which included how she met him two years prior at the Bluebird Cafe and immediately fell in love, but thought he was married. She even told him how she had gotten this instinctive feeling that she was meant to be with him. She eventually found out through a mutual friend that he wasn’t married which is why she returned to see him for the second time. But there were still other hurdles in their way.

10. They Were Both Dating Other People

During that first phone conversation, Joey revealed she was dating someone else and that it was pretty serious. “She told me she was dating a wonderful guy, up in Indiana, and that they’d been together for a year and a half and she was probably going to marry him,” he wrote in his memoir. Rory was also dating someone else at the time, but regardless of their significant others, he asked if he could meet her for coffee to find out who it was he’d missed out on marrying. They had their first date at a truck stop. After that, they kept in touch and eventually decided to give the relationship a real shot. Joey called Rory and told him she had broken up with the man she was with. “I hung up the phone and called the girl I was dating and told her it was over. God had just moved a mountain, right in front of me. And I was going to see what was on the other side,” wrote Rory.

At the beginning of his memoir This Life I Live, Rory jokes that he’s most famous for loving his wife. While these two are well known for sharing their romantic journey, Rory is also open about the fact that it wasn’t always easy between the two. The first few years of their marriage were quite tough. Joey’s solo record deal disappeared and they clashed over children. Rory wanted more children and was already a single parent to two daughters, while Joey made it very clear she had no interest in being a mother.

8. They Almost Didn’t Have Children

After seeing Joey with Indiana for the short while they had together, it’s clear how much Joey loved her, but according to Rory, they almost didn’t have children at all. In fact, there was a long time when Joey wouldn’t even hold a baby! “In the first 10 years we were married, [Joey] wouldn’t pick up or hold a baby, even if it was one of her sisters’ children,” he wrote in his memoir. This was a sore subject between the two for the first few years of their marriage, but 10 years into their marriage, Joey had a change of heart. “[Joey] said she was ready to give God everything. Even the part that scared her the most. Getting pregnant and having a baby.”

7. They Waited for Marriage

Although Rory had been married before and already had two children, Heidi and Hopie, from his previous relationship, he and Joey waited until their wedding night to consummate their marriage. “When we got married, I decided there would be no one else but Joey. And that meant no one else. Not in real life and not in my head. I committed to not allowing myself to experience the greatest expression of love that a person can feel without my bride being with me. Not ever. Not once. And that was a big, big deal. She didn’t ask for that. Or require it. I wanted to give it,” he wrote in his memoir, This Life I Live.

They are known as the singing duo Joey + Rory. Rory was a songwriter who’d written hits for big artists like Blake Shelton, Kenny Chesney, and Reba McEntire, while Joey was strictly a performer. They met, fell in love, and naturally combined their talents to become a successful duo. When they met Joey had a record deal with Sony, but she eventually lost it and the album she recorded never reached the shelves. After she was dropped by Sony, Rory started his own independent label Giantslayer Records in 2004 and released her debut album Strong Enough to Cry. Their big break came when they competed on the CMT show Can You Duet in 2008 and placed third! Not long after the show, they were signed to Sugar Hill Records. They won an ACM Award in 2010 for Vocal Duo of the Year and a Grammy Award for Best Roots Gospel Album.

Rory had always wanted to have a child with Joey, but it took her a long time to warm up to the idea. Finally, in 2013 she found out she was pregnant and in February 2014, the couple welcomed a baby girl named Indiana. Shortly after she was born, the Feeks announced she had Down syndrome. Three months after Indiana was born, Joey was diagnosed with cervical cancer.

While it might have taken these two soulmates a little longer to meet than expected, their relationship moved at a rapid speed once they finally did. “Halfway through making the record, Rory and I met, and we got married probably within four months of meeting,” she said to CMT News. Their first date was on Valentine’s Day. He proposed after only dating for two months, and they tied the knot two months later on June 15, 2002. The reception was held at Pearl’s Palace, where they finally met for the first time.

Courtesy of Joey and Rory Feek/Facebook

During the height of their fame in October 2010, Joey and Rory treated a media writer from The Boot to a home-cooked meal. “We just like our life a lot. There’s a weird thing where we’re trying to figure out what’s super important and what’s not,” said Rory. “Everyone in the music business is so worried that it might go away, and when you’re worried it might go away, I think that’s part of making it go away. But for us, if it goes away, we get to stay here more — OK, we’re good with that. Honestly, just having hit songs or being a success is not the end all to us. The heart of us is our kids and our marriage and our life.”

Not surprisingly, when Rory approached Joey’s parents after only two months of dating their daughter to ask for their blessing, they were taken aback. Joey’s father, Jack, was especially worried the two were rushing things, but Joey said, “When you know, Dad, you know,” and he eventually gave his approval. Later that night, Rory asked Joey to go for a walk with him. In his memoir, Rory wrote: “We walked and walked and dreamed and talked. The moon was bright, and it lit up the sky and farmland like it was daytime. When we got to the other side of the four-way stop, I got down on my knee. ‘Joey Marie Martin, will you marry me?’ I asked. […] Of course, she had known I was going to ask her some time. Today, or tomorrow or the next week, but she didn’t know it would be right then. Right there. […] We were both still crying when I heard her sweet voice say, ‘I will.'”

In an interview with the Country Standard Time back in 2010, Joey described her perfect date night with Rory and how they are basically inseparable. “Our perfect date night is making a campfire and cooking steaks over the fire and having a glass of wine and decompressing. But we don’t want to be separate for one minute. After eight years of marriage, I think that says something,” she said.