Celebrities You Forgot Appeared On That ’70s Show 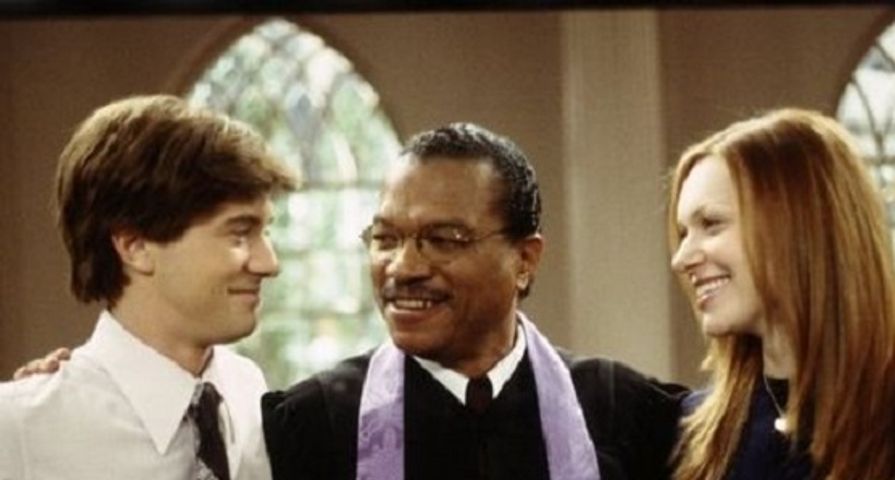 Long after the ’70s actually happened, Fox cashed in on the popular decade with the hit series That ’70s Show. The sitcom aired from August 1998 to May 2006 and featured a stellar cast and launched the careers of quite a few popular stars. Aside from the incredible main stars, quite a few familiar faces also made an appearance through the show’s eight seasons. From big name stars to those just beginning their career, here are 12 celebrities you forgot appeared on That ’70s Show:

Joseph Gordon-Levitt has had an incredible career already, and has proven he has great range as an actor, but like so many others he got his start with small roles on television. After appearing in four episodes of Roseanne, and taking on small movie roles, he then began to break out in fame thanks to his starring role in 3rd Rock From the Sun. Thanks to 3rd Rock From the Sun and That ’70s Show sharing a production company, Gordon-Levitt made a guest appearance on the series as a popular rich kid who becomes friends with Eric named Buddy. In the end, Eric is taken by surprise when Buddy kisses him and reveals he wants to be more than friends. It was the series’ only attempt at introducing an LGBTQ character, and was one of the first times a gay male kiss appeared on primetime North American television. So, while Gordon-Levitt only appeared for one episode, he certainly made his mark.

These days, audiences are used to seeing Golden Globe-winning actress Amy Adams dominating the big screen in major roles, but in the late ’90s and early 2000’s her career was only beginning! Following her first ever role in Drop Dead Gorgeous, Adams third ever credited role was on That ’70s Show in the season two episode “Burning Down the House.” The actress starred in the episode as Kat Peterson, a classmate of the core cast and one of Jackie’s popular friends who draws the interest of many of the guys especially Hyde and Fez. Of course, Adams is no stranger to small roles on popular shows, she went on to also appear in Charmed, Buffy the Vampire Slayer and Smallville, but all of those roles are long forgotten thanks to how big her career is now.

Bruce Willis surprised everyone with his recurring guest spot in Friends, but the iconic action star returned to TV for another surprising guest appearance in That ’70s Show. Willis made his appearance in the season eight episode “Misfire” as Vic, the security chief at the Playboy Mansion and boss of Kelso after he lands his “dream job” as security at the Playboy Mansion. Unfortunately for Willis, the cameo was marred by his character’s awful personality and even worse wig and mustache, but proved yet again that Willis enjoys taking on sitcom comedy from time to time.

Eliza Dushku was a Hollywood chameleon during her early days in the industry. From starring alongside action star heavyweight Arnold Schwarzenegger in True Lies to rocking teen comedy in Bring It On, Dushku turned heads early, but of course her most memorable role came as Faith in Buffy the Vampire Slayer. After her role in Buffy came to an end, the actress appeared on That ’70s Show in the season seven episode “It’s All Over Now” as “Sizzling Sarah” a co-worker of Donna’s whose sexiness makes her an instant favorite at the radio station. While Dushku has continued to act, she has not reached the same level of fame the late ’90s and early 2000’s brought her. She was most recently seen in three episodes of the series Bull and in the TV movie The Saint in 2017.

Luke Wilson is best known for his numerous film roles, but he has also made his way to the small screen a time or two, and had a recurring role on That ’70s Show! The popular actor first appeared on the series in the season four episode “Donna Dates a Kelso” as Michael Kelso’s older brother, Casey Kelso. Wilson ended up appearing in four season four episodes before making his return in season six’s “My Wife” and again in season seven’s “2120 So. Michigan Ave.” In Wilson’s last appearance as Casey Kelso his character revealed he was leaving to go travel India with his other brothers.

Jessica Simpson may have only dabbled in acting while focusing on her music career and her stint on reality TV, but in that time she also appeared on That ’70s Show. Back in 2002, Simpson made her first appearance in the first episode of season five as Annette, a gorgeous California girl who Kelso strikes up an interest in after he and Donna fled to California at the end of season four. She reappeared later in the season when Annette arrived in Wisconsin to visit Kelso, causing a lot of drama between him and Jackie. Her role ended in the following episode “Babe I’m Gonna Leave You” when Annette grew bored and cold in Wisconsin and was sick of Kelso’s obsession with Jackie.

It may be hard to believe but Seth Green has nearly 200 acting credits to his name, and with a resume like that it is easy to forget some of his smaller roles! The actor first appeared on That ’70s Show in season six’s “The Battle of Evermore” as Mitch Miller, another guy with a huge crush on Donna but with a bad attitude. He ended up appearing in five episodes over the course of the season, and audiences were certainly not impressed by the character. While Green isn’t seen in too many roles anymore, he has been kept busy with voice acting roles including providing several voices in Robot Chicken and voicing Chris Griffin in Family Guy.

Eliza Dushku wasn’t the only Buffy the Vampire Slayer alum to make a guest appearance on the series! After Buffy the Vampire Slayer came to an end in 2003, Hannigan slowed down her roles and after reprising her role as Michelle in American Wedding, she showed up on That ’70s Show. She first appeared in the season six episode “Sally Simpson” as Suzy Simpson, a tomboy and fellow police cadet of Kelso’s. Although Suzy developed a crush on Kelso, he instead tried to set her up with Fez, which results in a disastrous date. She returned as Suzy in the following episode “Won’t Get Fooled Again” but after finding out Fez is in a green card marriage and Kelso had a child, she left quickly. Only one year later the actress found herself in TV stardom again after taking on the role of Lily for How I Met Your Mother.

Between the show being based in the ’70s, and Eric’s obsession with Star Wars, it wasn’t surprising, but still thrilling, when beloved Star Wars actor Billy Dee Williams made a guest appearance on the show. The actor, best known for his role as Lando Calrissian in the Star Wars franchise, appeared on That ’70s Show in 2004’s season six episode, “Baby Don’t You Do It.” The actor starred in the episode as Pastor Dan who Eric and Donna go see for pre-marital counseling and lie to about having had sex before marriage. Although the cameo was for fanservice, it was truly entertaining and many were disappointed he never came back to the series.

The early 2000’s were a truly golden time for many stars, especially for Lindsay Lohan. Fresh off her iconic role as Cady Heron in 2004’s Mean Girls, the popular star showed up in That ’70s Show in the season seven episode “Mother’s Little Helper.” Lohan guest-starred as Danielle, a girl who begins going to the salon that Fez works at, and of course the two begin to flirt, which played off the two star’s real-life relationship at the time. As per the course for the show, any new girl introduced became a target of competition between two of the guys, and this time Kelso also took an interest in Danielle, causing a rift between him and Fez as they competed for her attention.

Over the course of its many seasons, That ’70s Show saw many popular stars from former variety shows and sitcoms make a cameo, but one of the best was Betty White’s. The incredible actress is amazing in any role, big or small, and of course that is true for her recurring guest spot in the series. White first appeared in the show’s fifth season as Bea Sigurdson, the hilarious and outrageous mother of Kitty and grandmother of Eric and Laurie. White’s last appearance in the role was in season five’s “Babe I’m Gonna Leave You” after four episodes, but she still remains one of the best celebrities to cameo on the show over its 200 episode run.

With Dwayne “The Rock” Johnson as one of the highest-paid actors in the world, and continuously pumping out blockbuster movie after blockbuster movie, it is hard to remember that his initial fame didn’t come from acting. After a brutal knee injury derailed his football career, he took to wrestling and became a WWE superstar. Believe it or not, his first ever credited acting role came in 1999 on That ’70s Show! At the height of his career in the WWE Johnson appeared, as a wrestler of course, on the episode “The Wrestling Show.” To make things even more interesting, he appeared not as himself but as his father Rocky Johnson who was a very popular wrestler in the ’70s! Although he played a wrestler, and the part didn’t demand too much actual acting skill, it is incredible to think how far Dwayne Johnson’s Hollywood career has come since that very first role.