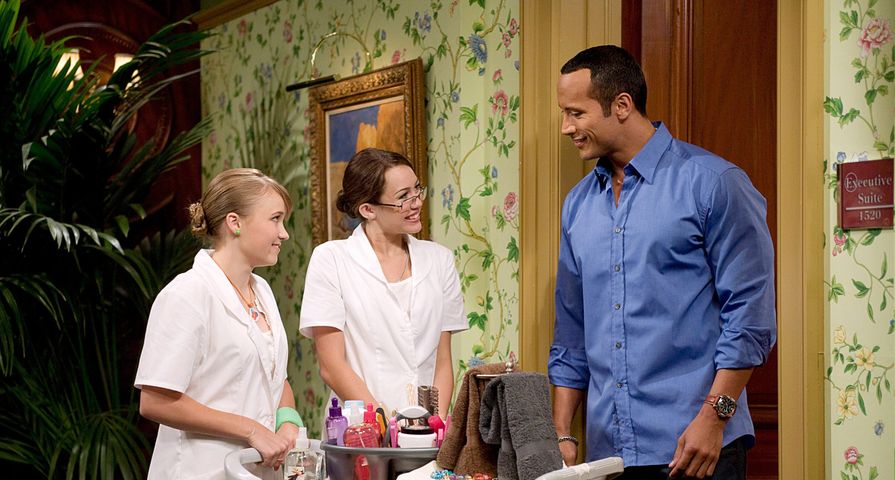 The biggest Ryan Gosling fans know that the star got his start with Disney thanks to the Mickey Mouse Club, but he also appeared on another Disney channel series! Before Gosling was breaking hearts or even starring on the teen series Breaker High, Gosling appeared in two episodes of Flash Forward as bully Scott Stuckley. Flash Forward only ran for one season from 1996 to 1997. Luckily later that year he got his big break on Breaker High which aired on YTV and UPN Kids, but it also only lasted for one season from 1997 to 1998.

Before Queen Bey was at the top of the entertainment industry, she was best known for being in Destiny’s Child. In the days when the girl group consisted of Beyonce, Kelly Rowland, LeTavia Roberson and LeToya Luckett, before Michelle Williams was introduced, the up and coming singer appeared on an episode of Smart Guy. Later, Beyonce along with Kelly and Michelle appeared as Destiny’s Child on a different Disney channel series — The Famous Jett Jackson!

Before Lucy Hale’s breakout role in Privileged followed by her starring role in Pretty Little Liars, she appeared in several different shows. She actually started on two Nickelodeon shows and The O.C. before she appeared on two episodes of Wizards of Waverly Place as Miranda. She appeared in “Pop Me and We Both Go Down” and “First Kiss” as Justin’s girlfriend, however she was never seen on the show again. Only two years later the actress landed her role as Aria Montgomery on Pretty Little Liars.

Zachary Quinto first turned heads in 2006 when he began starring on the popular sci-fi series Heroes as Sylar, but like all stars, he had to get his start with smaller, lesser known roles first! In 2002, Quinto appeared on the beloved Disney channel series Lizzie McGuire starring Hilary Duff. He appeared in the season two episode “Party Over Here” as a director for a commercial that was supposed to star Matt and Sam. Now, the role is long lost on his resume, especially after he has taken on the iconic role of Spock in the rebooted Star Trek films.

Before Jessica Szohr was bringing her Brooklyn style to the Upper East Side and shaking things up on Gossip Girl, she was a fashionista on Disney! The stunning actress got her start in single episodes of many popular shows including My Wife and Kids, What I Like About You, and eventually made her way to That’s So Raven. Szohr appeared in the season three episode “The Big Buzz” with the incredible name Jordache Hilltopper, who was of course Raven’s top competition in the school’s Best Dressed contest.

The past few years have been huge for Ross Butler, and you probably didn’t even know him prior to 2016. Now, Butler is best known for being the first actor to portray Reggie Mantle on the first season of the new hit teen drama Riverdale, and also starring as Zach Dempsey on the Netflix series 13 Reasons Why. Butler became so in demand he even had to leave his role on Riverdale to focus all of his attention on 13 Reasons Why, but before that he had a recurring role on Disney channel’s K.C. Undercover. Butler portrayed Brett Willis, an enemy spy and ex-boyfriend of K.C., and appeared on the show for eight episodes from 2015 to 2017 before moving on to his bigger roles.

Even Oscar-winner Octavia Spencer made her way to the Disney channel! Back in 2008 Spencer appeared in two episodes of Wizards of Waverly Place in the show’s first season. The actress portrayed Dr. Evillini, who as you guessed by her name, was out to steal another wizard’s powers. In the end, it came down to Selena Gomez’s character Alex to defeat Dr. Evillini and stop her plan. Now, Spencer has chalked up 130 acting credits to her name, and her brief stint on the Disney channel has long been forgotten.

It is hard to believe that there was a time when Zac Efron was an unknown up-and-coming actor, but that was certainly the case for the now major star in the early 2000’s. In the same year his life changed when the first High School Musical film was released, Efron made a small appearance on The Suite Life of Zack and Cody. He guest-starred as Trevor in the season two episode “Odd Couples” as a super-smart boy named Trevor who London tries to impress, but he instead falls for Maddie.

Well before Rachel McAdams played the ultimate high school Queen Bee as Regina George in Mean Girls, or starred in one of the most beloved romance films of the 2000’s with The Notebook, she got her start with a small appearance on the Disney channel. McAdams’ very first acting role was in 2001 on season three of The Famous Jett Jackson in the episode “Food for Thought.” McAdams played Hannah, the sister of one of the costars that Jett was working with.

Dwayne “The Rock” Johnson’s career has really seen no limits. From the CFL to NFL to the WWE and now one of Hollywood’s highest-paid actors, it seems you can’t turn anywhere without “The Rock” being involved, you can’t even turn to the Disney channel. Many of his fans may have forgotten but before he was a big-time movie star, many of his early films were family orientated like the Tooth Fairy and The Game Plan. Then, way back in 2007, he appeared as himself on the second season of Hannah Montana in the episode “Don’t Stop Til You Get the Phone.” He even got a pretty intense makeover on the show.

It is hard to believe that Disney’s Smart Guy aired twenty years ago, and at the time a lot of today’s biggest stars were just getting their start including Taraji P. Henson. Before she was winning Golden Globes for her role in Empire or getting nominated for an Oscar for The Curious Case of Benjamin Button, Henson was taking on many small roles. She appeared on Sister, Sister, ER, and even Saved by the Bell: The New Class before she landed in Smart Guy. Henson ended up appearing in three episodes of the series in two different roles! She first appeared in the season two episode “Big Picture” as a character named Monique and then returned in season three as Leslie, a friend of T.J.’s older sister.

While Emma Stone is one of Hollywood’s most sought after actresses now, early in her career she was picking up small roles and actually went by Emily Stone. In 2006, Stone landed only her third role ever on The Suite Life of Zack and Cody, and if you are thinking you never saw her on the show that is because technically she didn’t actually appear. For one episode she voiced Ivana Tipton, London’s dog. Ivana having a voice was only needed for the storyline of one episode so that ended Stone’s brief stint on the popular Disney show.