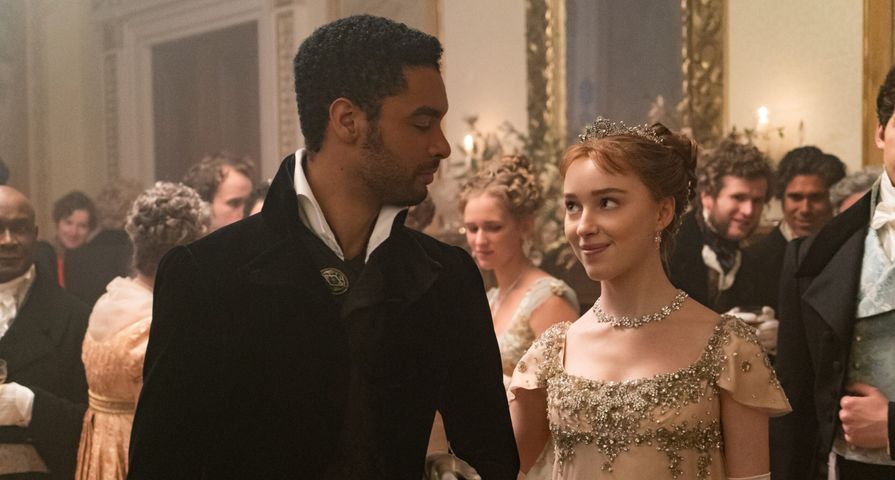 Bridgerton has officially been coined Netflix’s most-watched show ever, and for good reason! From the wardrobe to the chemistry of the cast, Bridgerton definitely had viewers at the edge of their seats the entire first season. If you call yourself a bonafide Bridgerton superfan at this point, take a look as we deep dive into a few little known behind-the-scenes secrets about the popular Regency era series:

12. Phoebe and Regé-Jean went through six weeks of prep

To prepare for the roles of Daphne and Simon, Phoebe Dynevor and Regé-Jean Page had to undergo six weeks of prep before filming even began. This prep included everything from etiquette classes, dance lessons, costume fittings, horse riding lessons, and writing lessons. Dynevor specifically had to take piano lessons as well.

Pheobe opened up about the dance lessons and shared that they really helped to build chemistry between her and Page. She explained, “We just spent so much time with our choreographer, Jack Murphy, and loads of time in the studio — just me, Regé, and Jack sort of getting the moves right and dancing and dancing to this modern, fun music. And we just got time to play and sort of form a connection.”

10. Most of the cast hasn’t met Julie Andrews

Lady Bridgerton is voiced by Julie Andrews on Bridgerton, but fans might be surprised to know that despite her constant role in the series, many members of the cast have yet to meet her! All of Andrews’ recording sessions were done virtually which meant there was never a need for her to be on set. Nicola Coughlan explained that there was a plan for Julie to visit set but it never worked out. The cast figured they would eventually meet Andrews during the press tour for season one, but that didn’t happen due to the pandemic.

After watching the first season, it’s hard to imagine anyone else playing Simon than Regé-Jean Page, so you might be surprised to find out that Jonathan Bailey, who plays Anthony, actually auditioned for the role. “It wasn’t until I was talking to the production company and Chris Van Dusen, the showrunner, and at the end of the meeting we’d spoken about family, and men in society, and women in society, and our own personal experiences,” Bailey told Oprah Mag. “And they said, ‘Have you thought about Anthony? We’re gonna send you some scripts to read because we think you might be an Anthony.'”

The costumes on Bridgerton are absolutely gorgeous, but you might be surprised to learn how many pieces were created for the show! The show’s production created its own costume house with a range of thousands of original, handmade pieces that totaled approximately 7,500. Materials and jewelry were imported from all over the world, including Spain and Italy. Phoebe Dynevor had 104 costume changes alone across eight episodes.

7. Eloise and Penelope are best friends in real life

Eloise and Penelope are best friends on Bridgerton, but fans might be surprised to learn that the actresses who play the characters are best friends in real life too! Bridgerton author Julia Quinn shared that the budding relationship between actresses Claudia Jessie and Nicola Coughlan echoed the bond of their characters onscreen. “They became such good friends in real life, and you could totally see that. I tell people you’ve got this great romantic chemistry, but there’s also BFF chemistry here to love,” Quinn shared.

As much as fans want Violet Bridgerton to find love, Bridgerton author Julia Quinn doesn’t foresee that happening in the coming season. “I love her so much that I’m not sure I could create somebody good enough for her,” Quinn shared. “I think she’s reached a point where she’s an independent woman and she’s happy. In that day and age, if she got married again, suddenly he’ll get to be in charge of everything. I don’t think she’s ready to give that up.”

5. Golda Rosheuvel had special transportation because of her wigs

According to People, Golda Rosheuvel, who played Queen Charlotte, was given special transportation around the set and between scenes because of her oversized wigs. Reportedly she was transported in her own minibus with exceptionally tall ceilings to avoid damaging her wigs, which often measured over two feet in height.

Dynevor has shared that she used Keira Knightley as inspiration when getting into character for the role of Daphne. Knightley has appeared in a long list of period movies throughout the years from the Pride and Prejudice to the Pirates of the Caribbean franchise to The Duchess, Anna Karenina, Atonement, and more. Dynevor shared that she grew up “in the Keira Knightley era”, and went through “every one of her movies a few times” to gain inspiration for the role of Daphne.

3. Phoebe Dynevor and Regé-Jean Page’s first scene together was intimate

Dynevor and Page have joked in the past about how their first on-set scene together was the intimate library scene after the pair are married. The duo joked that there was no room for first-day nerves since they got such an intense scene out of the way in their first take.

In “A Close Encounter With The Cast Of Bridgerton,” Regé-Jean Page shared that most of the time the horses in the series pulling the carriages weren’t pulling passengers. He shared that they went down the streets of London and through the English countryside completely empty. He shared that the scenes where carriages with passengers were involved were filmed in the studio. Actors would deliver their dialogue, and then members of the crew would push the carriages forward to indicate movement at increasing speeds.

1. Sabrina Bartlett did her own singing

Often when actors sing in a film the vocals are dubbed or lipsynced by a professional singer. This was not the case however with actress Sabrina Bartlett who played Siena Rosso and sang all her own vocals for the show.