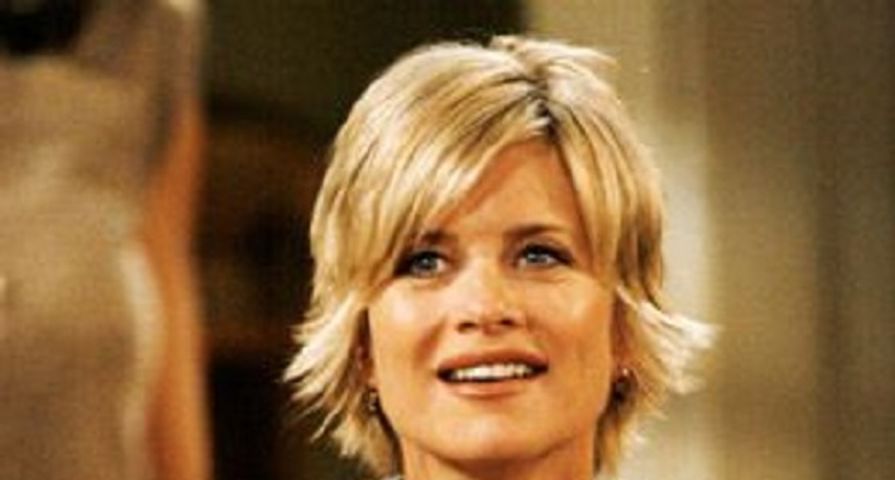 A fire poker … really? More often than not, serial killers will use a gun, knife, or a rope of some kind to kill off soap opera characters in a storyline wrapped in mystery. When Young and the Restless’ (Y&R) Austin Travers wound up dead (and stuffed in an armoire) on Valentine’s Day 2015, Y&R fans knew they had a crazy murder mystery on their hands. Courtney Sloane ended up being another victim. How did the killer end his victim’s lives? Death by fire poker of all things. Beyond ridiculous … especially when the killer was found to be a police officer on GCPD.

Imagine this: dying from an incident only to come back to life and die from that very same incident again. In 1998, General Hospital’s (GH) Katherine Bell died after an accident that involved her falling off a parapet. Thankfully, Helena Cassadine was able to bring her back to life using experimental medicine … only to push poor Katherine off that same parapet months later causing her to die for good this time. One thing to consider here: if you died via a fall from a parapet once, wouldn’t you avoid being anywhere near a parapet for rest of your life?

Rewinding a few years, we come to Days of Our Lives (DOOL) Salem Stalker angle that ruled the show for months. Beloved DOOL characters were dying everywhere in weird and ridiculous ways. A fairly new character on the scene, Cassie Brady, found herself a victim to the stalker in 2003, dying thanks to a stab from a Thanksgiving piñata. Clearly the stalker was a party pooper or perhaps hated candy …

The soap opera world mourned the death of talented actress Jeanne Cooper when she passed away in 2013, leaving an incredible acting legacy behind her. Her portrayal of Katherine Chancellor was amazing and Y&R fans still miss the actress and character terribly. Her character certainly had her ups and downs, but one storyline stands out above the rest. One unbelievable storyline was when Genoa City thought she was dead. Driving her doppelganger Marge Catrooke to rehab (the women looked identical to her even though they weren’t related), they got into an accident and Marge died instantly. Kay was thrown from the vehicle, but everyone just assumed Marge was Kay and the Chancellor family mourned the loss of their matriarch. Kay was later found by Murphy (Marge’s friend) which launched a beautiful love story between the two.

This ridiculous death stems from the 1980s, so let’s take it all with a grain of salt. Mikkos Cassadine wanted to rule the world and thought creating a weather machine to freeze the earth could help him inch closer to that idea. Of course, our heroes Luke and Laura Spencer, as well as Robert Scorpio would never allow that to happen. Thus, Luke threw Mikkos in his own freezer chamber and left him to die. He was gone, but the whole incident launched the Cassadine/Spencer feud that still continues in Port Charles this very day.

DOOL’s Stefano DiMera has died so many times on the soap he must have some sort of record. Whether he’s been thrown off a cliff, stabbed, or shot, the Phoenix always rises to see another day. A ridiculous DiMera death circa 2004 was when Andre, pretended to be Tony, drained Stefano’s blood to help him get over a blood disease he had. DOOL fans were shown a burnt and dead body, whom Andre/Tony claimed to be DiMera’s. It wasn’t, but the idea that anyone would drain someone’s blood in such a fashion is utterly ridiculous.

Nothing more final than someone dropping into a lava-filled volcano, right? Back in 2010, Sharon Newman was desperate to clear her boyfriend of murder charges. While Skye Lockhart was alive and well, the eldest Newman son had been pinned for her murder. Just when Sharon found Lockhart and was ready with the evidence to prove she was alive, Skye fell into a volcano, along with any evidence that Sharon could take with her to clear Adam’s chargers. One would think that anyone hanging around a hot, smoldering lava hole would be a little more careful than accidentally falling into it. Alas, this is a soap opera we are talking about.

If death by volcano seems ridiculous, then what about a bottomless pit? GH’s rich and powerful Cassadine family is always involved in some pretty over-the-top storylines. They love to try and freeze people (and the world), have loads of money, a mysterious island, and seem to get away with murder … literally. In 2001 it was also revealed they had a bottomless pit. Um, okay, who knew these things even really existed outside of Disney movies – but in the land of Port Charles, they do. While fighting with Luke in the Cassadine underground lab, Starvos fell into the abyss and met his maker. Actually, no he didn’t and ended up coming back in 2013, which leaves an even larger and more ridiculous question: did the bottomless pit actually have a bottom that allowed him to escape?

Beloved DOOL character Alice Horton was known for the incredible donuts she could whip up at the drop of hat. They were comfort food for anyone in Salem who was dealing with an issue and could drop by Alice’s house for a little talk and tasty treat. Unfortunately, Alice was one of the victims during the Salem Stalker angle in 2003 where the killer choked her to death with the homemade donuts she had made. Thankfully, Alice hadn’t really passed away, but death by donuts was an ironic demise for this legendary DOOL character.