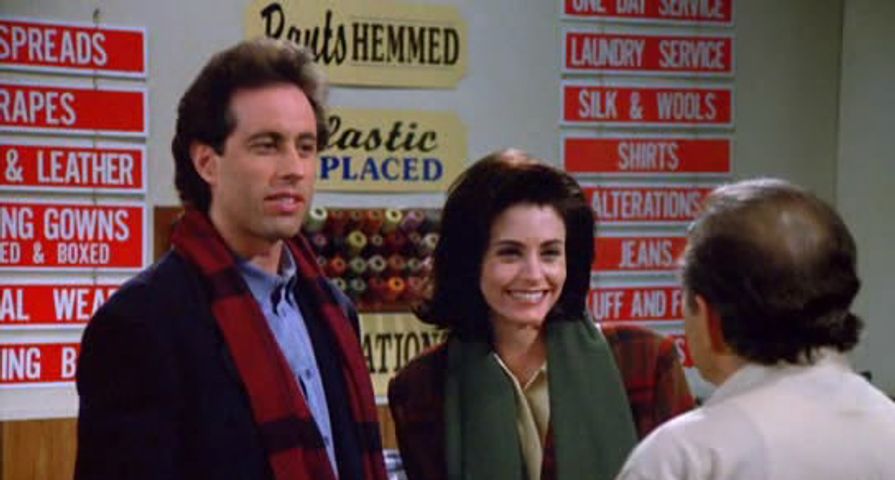 Now that every episode of Seinfeld is available for streaming on Hulu (that’s 180 episodes!), it’s time revisit the classic and hilarious sitcom. We all remember things like Jerry’s “puffy shirt” and the way Elaine used to push him in the shoulders as she screamed “Get out,” but you may not remember some of the show’s guest stars, who were unknown at the time, but went on to become huge TV and film stars. Jerry dated so many women (and broke up with so many people for ridiculous reasons) that it was hard to pick our favorites, but here are 9 celebrities you didn’t know appeared on Seinfeld:

Before Bryan Cranston was known as the dad from Malcolm in the Middle and the power-hungry drug dealer Walter White on Breaking Bad (a role that earned him an Emmy Award for Best Actor in 2014), he was dentist Tim Whatley on Seinfeld. He appeared in five different episodes: season six’s “The Mom and Pop Store,” “The Label Maker and “The Jimmy,” season eight’s “The Yada Yada” and season nine’s “The Strike.” Jerry Seinfeld said in a 2013 interview with Uproxx that he wasn’t surprised that Cranston went on to be a big star. “He’s one of those guys that when he walks in the room you go, ‘This guy’s got a lot of tools,'” Jerry said. “And I love that character by the way — Tim Whatley, the dentist.”

Could you imagine Lorelei Gilmore dating Jerry Seinfeld? In “The Millennium,” which was the 20th episode of season eight of the show, Lauren Graham played Jerry’s girlfriend, Valerie. In a very ’90s way, she and Jerry got into an argument over how they ranked each other on their phones’ speed dial lists. When Valerie later gets poisoned by eating a chemical that Kramer spilled into a bowl of salsa, she tries to call the Poison Control Center and ends up calling Jerry instead. He says, “Wow! Poison control? That’s even higher than number one!” and Valerie is so annoyed that she hangs up on him and dumps him. You’ll have better luck in Starz Hollow, Lauren!

Before she solved heinous crimes on Law & Order SVU, Mariska Hargitay auditioned to play Elaine on the show within the show of Seinfeld in the episode “The Pilot,” which was the one-hour two-part season finale of season four. We love her big, dark hair and flowered dress! Although Jerry clearly thinks she’s attractive and is more than happy to run lines with her, the characters end up choosing a woman named Sandi Robbins (played by Elena Wohl) to play Elaine.

Friends star Courtney Cox also appeared on Seinfeld as — you guessed it — a love interest for Jerry. In “The Wife,” which was episode 17 of season five, Courtney plays Meryl, Jerry’s girlfriend who pretends to be his wife so that they can try to get a 25% discount at the dry cleaners. The marriage-phobic Jerry likes the sound of having a wife, but he ends up cheating on Meryl so that he can give another woman the dry cleaning discount. Courtney only appears in this one episode; Friends actually premiered the same year as her guest spot on Seinfeld.

James Spader wasn’t a no-name when he appeared on Seinfeld; he was already known for the movies Pretty and Pink and Sex, Lies and Videotape. But you might not remember that he played Jason Hanky (aka “Stanky”), an alcoholic, in “The Apology,” which was the ninth episode of season nine of the show. Stanky is a childhood friend of George’s whom George learns is doing the twelve steps of Alcoholics Anonymous. Since one of those steps is apologizing to people, George thinks Stanky ought to apologize for once refusing to give George a sweater at a party because he thought George’s “large” head would stretch it out. When George demands an apology, Stanky refuses, maintaining that George really does have a large head, and that the sweater cost a lot of money.

Now that Sarah Silverman is so well-known for her daring and offbeat comedy, we’re not surprised that she served as a love interest for Kramer rather than Jerry on Seinfeld. Playing Emily in “The Money” (season eight, episode 12), she and Kramer ultimately don’t work out because Kramer decides he can’t sleep alone because he’s afraid of a prowler. (Kramer actually moves in with George’s parents, who tell George they are moving to Florida.) Sarah and Jerry have clearly stayed friends since the episode aired in 1997, since she let him interview her for an episode of season two of his web series, Comedians in Cars Getting Coffee.

Also known for Scrubs and Cougartown, Christa Miller is a unique Seinfeld guest star because she has played two different characters. In “The Sniffing Accountant,” (season five, episode four), George does an interview with Sid Farkus and feels a woman’s shirt between his thumb and forefinger on his way out. The woman (played by Christa) turns out to be Farkus’ boss, and demands that George get fired for his actions. Then in the episode “The Doodle” (season six, episode 20), Christa plays Paula, a girlfriend George meets at a painting class. When Paula draws an unflattering doodle of him, George freaks out and begs Elaine to help him find out if Paula really likes him. Producers of the show must have figured that fans wouldn’t remember Christa as the woman who got George fired.

Before Debra Messing became a huge star as Grace on Will & Grace, she appeared as Beth in two episodes of Seinfeld: “The Wait Out” (season seven, episode 23) and “The Yada Yada” (season eight, episode 19). In the first, Beth is in a rocky marriage and when George says that she can do better than her husband (played by Cary Elwes); she ends up breaking up with him. George looks at their behavior as a model for how he thinks his girlfriend Susan will behave, and is distraught when Beth and her husband get back together. Then in season eight, Elaine acts as a character witness for Beth (who’s now with a man named Arnie) so that Beth can try to adopt a child. Beth ultimately breaks up with Arnie and dates Jerry — but in the end, Beth reveals herself to be both a racist and an anti-Semite, so Jerry dumps her and tells Elaine that Beth left “to get her head shaved.”

Bryan Cranston wasn’t the only Breaking Bad star who first appeared on Seinfeld; Anna Gunn, now known as Skyler White from the AMC drama, also appeared on the sitcom as Amy in just one episode: “The Glasses” (season five, episode three). In the episode, George loses his glasses and, while not wearing them, thinks he sees Amy kissing Jerry’s cousin, Jeffrey, whom he says has a “horse face.” Jerry confronts Amy about this supposed cheating and she emphatically denies being unfaithful. In the end, George realizes that he did not see Amy and Jeffrey kissing; in fact, he wasn’t even close: he saw a police woman affectionately touching her horse.