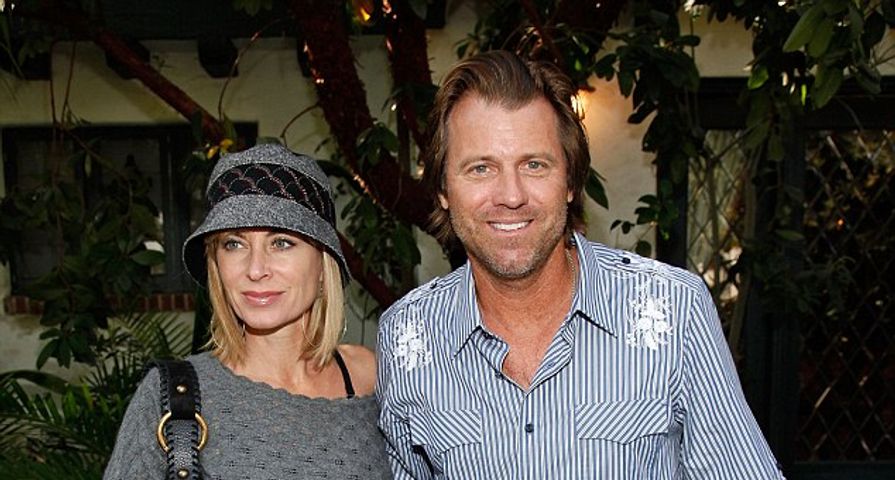 Soap opera queen Eileen Davidson and her husband Vince Van Patten have been together now for well over 13 years now and have enjoyed an incredible marriage. The two stars are currently enjoying a wave of reality-television success as they appear on Bravo’s Real Housewives of Beverly Hills since Davidson joined the cast in 2014. It’s rare that a couple experiences success together in Hollywood, let alone coming from the soap industry! Here are seven things you may not know about Eileen and Vince’s relationship!

As a daytime drama actress, Eileen has enjoyed playing two legendary soap opera characters on both Days of Our Lives (DOOL) and The Young and the Restless (Y&R). However, Eileen and Vince’s story began in 2000, when Van Patten had a small stint on the Y&R, playing the boyfriend of Eileen’s character (Ashley Abbot). While Christian and Ashley didn’t last very long, Eileen and Vince sure did! They ended up falling in love and eventually got married in 2003.

A photo posted by Eileen Davidson (@eileendavidsonofficial) on Dec 4, 2016 at 9:37am PST

This is where things get sticky in their relationship. Both Vince and Eileen insist that they were only friends on the Y&R set and that they respected the fact that they were both married at the time of their introduction. They remain adamant there was zero cheating in both their respective marriages. Vince was married to Betsy Russell when he met Eileen, but ended up divorcing her in 2001 while Eileen was married to fellow soap star Jon Lindstrom, who she divorced in 2000. Sadly, after 16 years, Lisa Vanderpump of the RHOBH took it upon herself to bring up the blurred timelines around the Davidson/Patten relationship and once again rumors of their alleged affair surfaced. Eileen responded that they both knew each person was married, were respectful of that and remained friends for a lengthy time before diving into a relationship. It seems believable, unfortunately there will always be those who speculate that the two were cheating.

Neither are strangers when it comes to the holy union of marriage. As mentioned, Vince had a two-year marriage to Betsy Russell and Eileen has had two failed marriages under her belt as well. The three-year marriage to Lindstrom has already been mentioned, but Davidson was also married to actor Christopher Mayer from Dukes of Hazard fame from 1985 to 1986. Sadly, her first marriage ended rather ugly, with Radar Online reporting that both she and Mayer had a restraining order placed against each other. Good news is she and Van Patten have gotten it right this time and are now celebrating close to 13 years of marital bliss.

It may not have been all blissful over their time together, but many couples do deal with their own ups and downs. In late 2015, Soap Shows reported some troubles in their marriage and predicted a potential divorce on the horizon. As 2015 closed and the world rung in a new year, Davidson took to Twitter to relay some fun photos of the two frolicking on the beach. She also told OK Magazine that she and Van Patten were fine and had no plans to divorce. The two seemed to be okay for the rest of 2016 and may be stronger than ever.

These two are a busy couple and it shows in their net worth numbers. Their net worth is estimated at an incredible $5 million dollars! Eileen’s estimated net worth is at $3 million while Vince’s is at $2 million. With the acting gigs and other endeavors, plus the fact that the Real Housewives stint must be a lucrative one (no confirmation on exactly what she makes, reports indicate the housewives make about $75,000 each season). It seems like these two are living the high life!

2. Actors With Other Endeavors

It’s no wonder why the couple are doing well in the money-making department. While the two have acting in their blood, Elieen being a long-time soap opera actress and Vince enjoying stints on television and movies, they also like to venture out of the Hollywood scene and enjoy other projects. In addition to their reality-television RHOBH gig, Eileen first broke onto the scene as a model and is also a published author of a handful of mystery novels that were written in the 2000s. She also happens to be an entrepreneur, owning a clothing line “Femmeology” along with her niece, Devon Martt. Vince, on the other hand, was once a professional tennis player and also a World Poker Tour commentator. However, all that aside, most likely the best and most favorite jobs they step into are in their roles as parents. Together they have one son and Eileen is a lucky step-mom to two boys from Vince’s previous relationship with Russell.

As the son of television actor Dick Van Patten, Vince is connected to quite a few famous people. First and foremost, his brothers are also actors, Nels and James Van Patten. His aunt and uncle are Tim and Joyce Van Patten, and he has family connection to cousin Talia Balsam. Interestingly enough, Eileen could have had some family connections to Angelina Jolie. While they never married, Eileen did date Jolie’s dad, Jon Voight, in the 1980s and it was said to have been a passionate affair. Had they gotten married, Davidson would have been Jolie’s stepmom. How crazy would that have been?