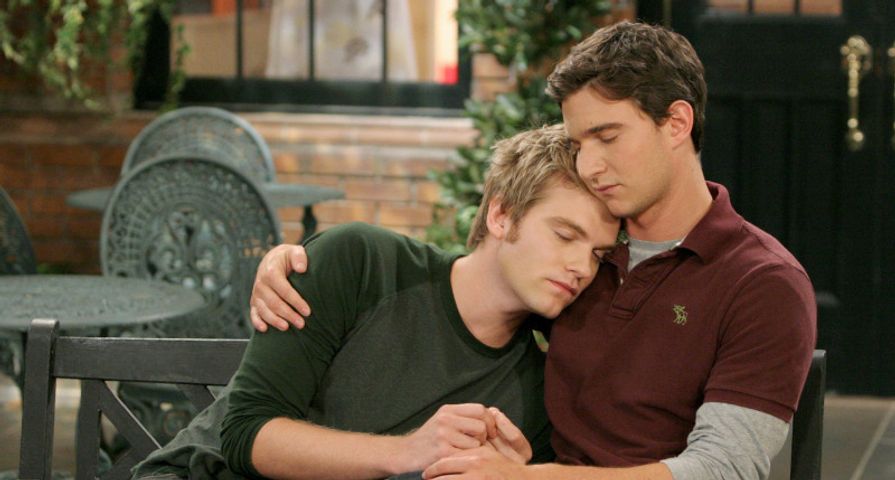 On the cusp of Valentine’s Day, love is certainly in the air! However, love is not limited to the old fashioned traditional ideas of what a couple is, and it is incredible to think of the strides that have been made on soap operas over the years, as it relates to same-sex unions. As love always wins in the end, below is a list of the top five same-sex soap opera couples that have made an incredible impact over the years.

This couple enters number five on the list for breaking ground within the world of same-sex couples and daytime, with their relationship stemming from a same-sex love triangle. While Lucas Jones ended up choosing Brad Cooper in the long run, he initially had Brad, as well as Felix DuBois fighting for his attention. The storyline provided some much needed exposure when it came to same-sex couples, and shed light on the ever-evolving love story between Lucas and Brad.

4. Luke Snyder and Noah Mayer – As the World Turns

Long before Days of Our Lives (DOOL) fans were swooning over WilSon, As the World Turns (ATWT) was breaking ground with same-sex couple Luke and Noah. While there had been gay and lesbian characters on soaps prior to Noah coming to Oakdale in 2007, this couple helped showcase a real romance between two gay males, on a daytime television platform. The duo also became the first gay male couple to kiss on an American soap opera. On August 17, 2007 Luke and Noah forever changed the way same-sex couples were viewed on daytime television, when they locked lips and trail blazed for other same-sex couples and characters on soap operas after them.

3. Bianca Montgomery and Lena Kundera – All My Children

Speaking of trailblazing, number three duo on our list is a lesbian couple who also helped pave the way (and pushed the envelope) for how same-sex romance should be featured on daytime television. Often referred to as Lianca, the All My Children (AMC) duo is well-known as the first same-sex couple to kiss on American daytime television. After Bianca, daughter of the infamous Erika Kane spent years falling for heterosexual women, only to get hurt, Lena was introduced, and the characters hit it off. On April 23, 2003, the two kissed and quickly became quite popular with AMC viewers, hitting number one spots within magazine reader and internet soap opera polls.

2. Will Horton and Sonny Kiriakis – Days of Our Lives

Who doesn’t love WilSon? While Luke and Noah paved the way for gay male couples, Will and Sonny blew this idea right out of the water when they coupled up in 2012. As the first same-sex couple in Salem, they wowed fans with more than a simple kiss, and steamed up daytime screens everywhere with their groundbreaking love scenes. They also offered a realistic perspective when it came to same-sex couples, and their storyline did not revolve around being gay, rather it showed other struggles all couples go through in daytime; meddling family, baby-mamma drama, murders, former lovers, and infidelity. Sadly, with the recent passing of Will Horton, there is no hope for a WilSon reunion; however, DOOL fans will always have their memories!

1. Bianca Montgomery and Reese Williams – All My Children

AMC’s Bianca Montgomery would continue to shatter soap opera history as it relates to same-sex couple stereotypes. Reese and Bianca came together in 2008, and was often affectionately referred to as Breese or Rianca. They were the first same-sex couple to showcase a proposal on American daytime television. The two moved on to get married (again, a first for American soaps), and featured the first American soap same-sex marriage within AMC’s storylines. The duo also provided viewers with the first American daytime family, with solely same-sex parents. Unfortunately, their wedding in February of 2009 did receive some criticism; however, it also received plenty of praise.