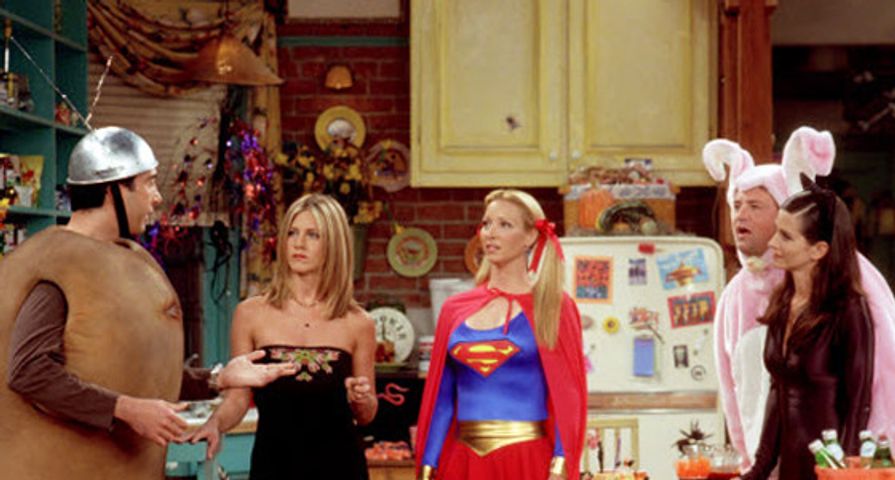 It is a rite of passage for every TV show to do a Halloween episode. Some shows wait a few seasons before they take the plunge, and others seem to exist for their Halloween episodes. We could build this list out to be 50 deep, but in the interest of saving time, we’ve whittled it down to to a more appropriate number. Giving full respect to the Halloween TV episodes that have survived the test of time, here the 12 greatest. Find them. Watch them.

Where to begin with this show? There are almost too many options!? The Simpsons, now in the midst of its 29th season is offering it’s 28th Treehouse of Horror Halloween episode in 2017. How could one possibly pick a favorite? If you want to do yourself a favor for any Halloween season, binge watch these episodes. If we were forced to choose only one episode, and one featured segment, it would probably have to be The Simpsons taking on The Shining in “The Shinning.” This may very well be one of the most quotable episodes of the show, and the pure parody of Stanley Kubrick’s classic horror flick is The Simpsons at its very best. There have been other greats, including battles with gremlins, monkey hands that grant wishes and of course, Treehouse of Horror VI, when Homer enters the third dimension and ends up in our world.

It was 10 years ago One Tree Hill tossed its hat into the ring of Halloween episodes. Their first foray into the spooky evening came in Season 3, with the fourth episode, “An Attempt to Tip The Scales.” The episode title was taken from Bright Eyes lyrics, and the episode itself featured an appearance by Fall Out Boy. Can’t go wrong there. It may be a tough to place this Halloween episode above the one in Season 8, but one must offer love for the original Halloween episode, and the fact that it presented some serious, necessary exposition to the story line, unlike a lot of Halloween episodes which seem to be a romp through costume wearing and seasonal cliches. Fans will remember Lucas having to reveal his heart condition to Haley in this episode, after she catches him stealing money in order to afford his medication.

The Fresh Prince of Bel-Air was another show that toyed with more than one Halloween episode, but the best of the best was easily “Hex and The Single Guy,” from Season 4. This episode featured Hilary in an attempt to communicate with her dead fiance, Trevor. In doing so, she enlisted the services of a spiritualist, and brings the whole family along for the fun. The seance is quite humorous, and Will takes it to the next level by consistently mocking the spiritualist. His insolence earns him a curse, and Will blows it off. He soon finds he was messing with the wrong man when a string of bad luck hits the family. No spoilers here, this one is worth every second of its 22 minutes of airtime. If you just gotta know what happens, you can safely assume that Will is able to work himself out of another mess.

Growing Pains did Halloween so right, they took two episodes to do it! Going back in recent history to 1990… it took six seasons for writers to get Halloween into the mix for this show, which is pretty shocking. And when they did, they did it right. For the two episode special, they re-recorded the theme song with Halloween inspired lyrics, and added footage from Parts 1 and 2 as well. In perfect sitcom fashion, the stories are then played out visually. Part 2 delves into the supernatural when Mike tells his story. There are appearances by some pretty fascinating characters, including a particularly young ingenue that “came” with Mike’s car. As we’re all well aware, it was the following season in which Leonardo DiCaprio joined the cast, and injected serious energy back into the show. He’d have been awesome in the Halloween episode.

This show changed television in so many ways. It established a new paradigm in the realm of teen/young adult drama and set trends the likes of which hadn’t been seen since James Dean was strutting his stuff in Rebel Without a Cause. For the original cast of Beverly Hills, 90210, the Halloween episode is one of their best. It also featured recurring guest star, Christine Elise, who played the troubled object of Brandon’s (Jason Priestly) affection, Emily Valentine. The Halloween episode featured a comedy of errors at the costume party–Tori Spelling completely immobile as a mermaid–while Jennie Garth was thrust into the spotlight of teen sex symbol due to her get-up. The great thing about these Halloween episodes, regardless of being slightly dated: they drip with universality. Parties. Pranks. Scares. Two dudes waiting for an egg fight that never materializes…? This episode offered it all.

For Freaks and Geeks, the Halloween episode, “Tricks and Treats,” was the third episode of the series, and the perfect episode to hook any viewer. It is a delightful comedy of errors, and is one of the more realistic portrayals of Halloween when looking at the hundreds of TV episodes featuring the holiday. Kids have to trick-or-treat during daylight hours, the costumes are less than professionally manufactured… nor have they been applied by a professional makeup artist (but they really have) and there is a wonderful running gag of people rejecting terrible treat options. This is one of those episodes that is readily available, so there will be no real spoilers here. What else can be said about this show? If you’ve never checked it out, watch the first three episodes–culminating with Halloween. You’ll be a fan.

Home Improvement is another of the ABC lineup that offered almost annual love for Halloween. If the air date fell close to October 31st, you could pretty much bank on it. It’s tough to choose one from this grouping, but fan favorites have remained “The Haunting of The Taylor House,” as well as “I Was a Teenage Taylor,” during which Tim and the gang prank Randy and Brad, who have claimed they’re too old to get scared on Halloween. There is something quite magical about “The Haunting of The Taylor House,” so if you’re hard pressed for time this Halloween, steer in that direction. All of the ABC Halloween episodes (including Boy Meets World, which could have easily made the list) dialed up the production value. This included some fun practical FX for pranks, and often some creepy guest stars to dial it up a notch.

My So-Called Life got into the Halloween business in its one and only season. This show was perfect for a Halloween episode, being an hour-long drama and not relegating itself to many rules. The episode featured lots of costumes, Angela being concerned for Jordan Catalano (a must for every episode) and supernatural elements that were derived from the death of a former student at the high school, Nicky Driscoll. Angela becomes slightly obsessed with Nicky, because she keeps having precog visions of him, and his death, which took place on Halloween in the 1960s. What the writers and producers did with this episode was pretty epic. They took a bunch of mid-1990s teenagers, and then evoked a bunch of 1960s imagery, which as well all know, mid-1990s teenagers were most inspired by anyway. The macabre in a network drama–pretty Halloweenish…pretty awesome.

Of course Buffy The Vampire Slayer is on this list. It’s almost as if a higher power invoked its presence. The Halloween episode, appropriately entitled, “Halloween,” from 1997, is a fan favorite. It took place in Season 2, and it was about the time the show was really hitting its stride. This is one of the more creative Halloween episodes of all time, and appropriate that it’s from the same era as My So-Called Life, which is definitely another. When shows really take you on a journey, you’re never left disappointed. For Buffy and pals, there wasn’t a lot of vampire slaying to do on Halloween, so they took in the traditional celebrations culture: they dressed up as someone else. Unfortunately for the heroes, their costumes were hexed by Roman god Janus, and everyone became their costume.

Season after season, the writers of Friends showed no interest in doing a Halloween episode, and finally, in Season 8, they offered “The One With The Halloween Party.” It was worth waiting for. The Halloween aspect may have been a little superfluous for the humor, but it certainly offered for desirable situational comedy. The episode featured a costume party, and some pretty ridiculous and hilarious costumes. Rachel opted out, and chose to give candy to trick-or-treaters, only to learn that she was really, really bad at it. The party heats up when Phoebe and Monica discuss who would win in a fight between Ross and Chandler, and the discussion gives birth to an arm wrestling competition between the two friends. Is all of this ringing a bell? If you’re not a Friends fan, and wonder what all of the fuss was about, this is a good episode to watch.

Roseanne is another show that offered love to Halloween almost annually. Of its nine seasons, the show pumped out seven Halloween episodes. It’s so hard to choose the best of the Halloween episodes, because this family was bent on pranks, and scaring the crap out of one another. It was nice to see the sitcom delve into the macabre, unapologetically. Backs against the wall, we’d have to go with the very first of the Halloween episodes, which was nominated for an Emmy. This is none other than “BOO!” that aired on Halloween of 1989, in Season 2. The episode featured a number of pranks between members of the family, with Roseanne and Dan continually upping the stakes. The plants and payoffs in this episode were pretty close to television perfection, and the climax holds up to this day. It is the quintessential Halloween episode.