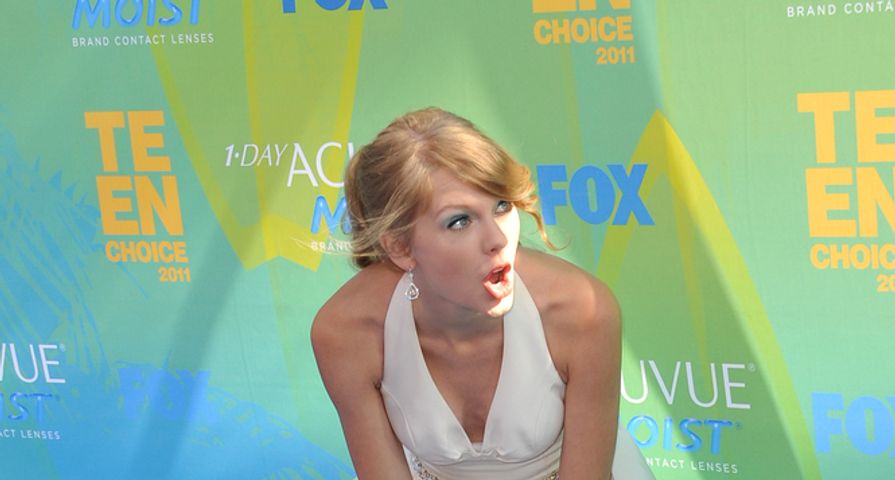 The 25 year-old singer and songwriter began her career as a country celebrity and has become a pop star sensation.  She has released four albums and is the youngest person to have performed and written a song that topped the Hot Country Songs Chart. She’s won multiple Grammy and Video Music Awards and is currently worth an estimated $240 million. She is notorious for her dating history and has reportedly had flings with John Mayer, Jake Gyllenhaal, Taylor Lautner, and Harry Styles. The sky is the limit for this young, talented, and wealthy starlet, but that doesn’t mean her career has been flawless.

11. I See London, I See France, I see Taylor’s Underpants

While performing in a cute purple dress at a concert in St Louis, Taylor Swift got a little too close to an industrial prop fan.  The singer tried to remain calm while her skirt flew up and revealed her nude grandma undies. After seeing the photos, there is only one thing we need to know: Are those Spanx?

Last year, Taylor Swift was proclaimed the Global Welcome Ambassador for New York City after she purchased a New York penthouse for $20 million. In tourist promo videos, she talks about visiting trendy neighborhoods and stated that, “Having a good cup of coffee or a good latte is really important to me.” Since the city is suffering from a lack of affordable housing and art communities are being taken over by sterile corporations these comments aren’t cool, Swift.

The young singer is known for her flawless style. Never a hair is out of place and she constantly looks like she walked out of a fashion magazine. Believe it or not this pop diva did not always have such good taste. Back in high school, she experimented with (we kid you not) cornrows. In her defense, she said, “I was 12, and going through my ‘braids phase.’ My high school pictures are, like…tragic…My style forever was going to be cornrows. I took my school pictures with the cornrows.”

Taylor Swift was thrilled to accept her first VMAs from MTV in 2009. The new singer on the scene was rudely interrupted during her thank you speech by Kanye West who took the mic from her and blatantly told viewers that Beyoncé should have won, not Swift.  Beyoncé saved the day by asking Swift to come back on stage and finish her speech.

At a New Year’s performance, Taylor Swift rang in 2015 by crashing down the stage stairs. It must be hard for celebrities, when they fall down. It’s immediately tweeted and gets a million hits on YouTube. But she showed the world that when she stumbles, she gets right back up. This wasn’t the first time she’s eaten dirt while singing as she came crashing down at a 2014 Minneapolis concert.

The country star turned pop singer has more awards than she knows what to do with. So it’s not surprising that at the 2014 Grammy’s she was expecting to win Album of the Year for her “Red” record. Film crews were on her as she looked excited to have won, when in fact Daft Funk was the victor. Sorry Swift.

Taylor Swift adores her fans and is always willing to snap a picture or two with admirers. However, she should really screen these photo ops a little better. When she was still getting her roots in the biz, she posed with a fan wearing a very obvious red swastika. No one wants to be the poster child for anti-Semitism.

While singing to one of her (many) ex-boyfriends in “Picture to Burn,” Taylor tells him it’s fine if he bad mouths her to all his friends because “I’ll tell mine that you’re gay.” Sorry Swift, being gay is not an insult and those lyrics are archaic. She changed the lyrics for her music video.

In her video “Shake it Off,” Taylor is filmed crawling through a tunnel of legs belonging to twerking women. The video was called “inherently offensive and ultimately harmful” by rapper Earl Sweatshirt. Looks like someone was trying to copy Miley Cyrus’ dirty dancing with Robin Thicke.

While she gets paid millions of dollars to sing, the lady can’t dance when she’s not choreographed. Her most embarrassing dance move is self-titled the mom-croon. To look as awkward as Taylor, you must close your eyes and sway to the music so you “cannot see the eye rolls of haters.”

Nicki Minaj, tweeted her frustration with MTV’s VMAs because her video for Anaconda was not nominated for video of the year.  She tweeted, “When the ‘other’ girls drop a video that breaks records and impacts culture they get that nomination…If your video celebrates women with very slim bodies, you will be nominated for vid of the year.” Taylor’s “Bad Blood” video did receive a nomination and she took Nicki’s comments personally leading to an all-out war on Twitter. By making it all about her, Taylor ignored what women of colour go through in the music industry.