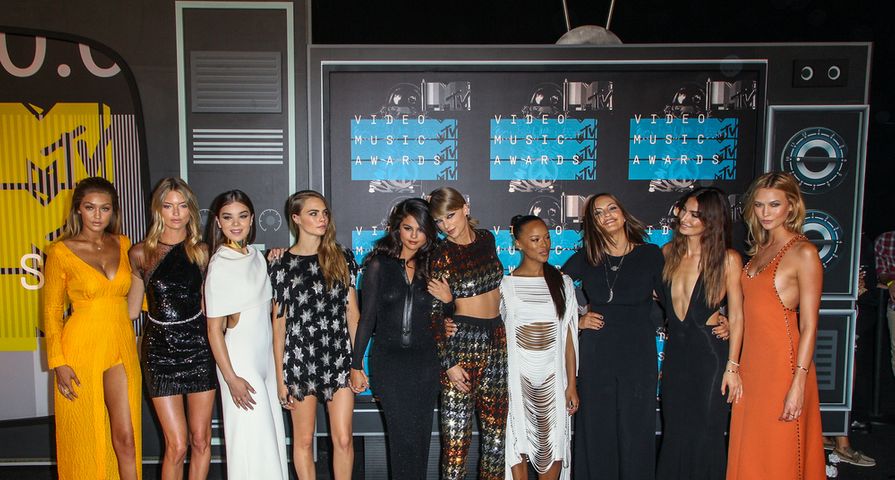 Taylor Swift is one of the most successful performers on the planet and it just so happens that she travels around with a super hot girl squad. The entourage is made up of the most beautiful women possible and may just be part of the reason for Swift’s great success. Her “Bad Blood” video featured names like Gigi Hadid, Jessica Alba, Cindy Crawford, Selena Gomez, and Hayley Williams, just to name a few and these appearances helped T-Swift break the record for the most-watched video in 24 hours on Vevo: 20.1 million views in 24 hours! Move over Incredible Oz; T-Swift’s girl crew is all powerful!

10. Taylor is Super-pals with Lily Aldridge

Lily Aldridge has graced our magazines since her start at the age of 16, and she’s developed into one of the most beloved Victoria Secret Angels. After walking the Victoria’s Secret runways for two years in a row with Taylor Swift, the two formed a special friendship. “Taylor just loves her friends, and so do I. My girls are my girls,” Aldridge told EDIT magazine. The stunner appeared as the ice queen Frostbyte in the “Bad Blood” video and seems to have officially joined the upper echelon of T-Swift’s loyal gal-pals.

T-Swift chills with supermodel/actress/country aristocrat Cara Delevingne. This sought after beauty is openly bisexual and enjoyed a brief romance actress Michelle Rodriguez. Taylor and Cara met at the 2013 Victoria’s Secret show and have been chums ever since. Delevingne has nothing but good things to say about Swift, “She’s such a nice person. She’s so inspiring. She was someone that I met and I was really surprised by how lovely she was. I met her mum and dad straight away. This girl is wholesome and so sweet.” Aww!

Taylor is good buds with even more Victoria’s Secret Angels, because like why not? And Martha Hunt is one of them! The stunning beauty has over a million followers on Instagram where she opened up publically about her battle with Scoliosis, a curvature of the spine that can cause intense pain. Hunt underwent posterior spinal fusion surgery and continues to raise awareness about the condition. Martha has maintained her positivity and says the situation has made her stronger. It’s clear how her enduring spirit landed her in the midst of Swift’s inner circle. Of her relationship with the posse Hunt has said, “It’s great to have girlfriends who are in the industry, that you know have your back. I love being a part of [Swift’s] squad.”

Kendall Jenner is part of the Kardashian clan and has become one of the world’s highest paid models. It was always rumored that Kendall and Taylor hated each other and reportedly lashed back and forth at one another for being a “mean girl.” But the two recently put the speculation to bed when Kendall joined Taylor on stage at her 1989 World Tour in London, swaggering down the catwalk while Swift performed her hit “Style.” Why be enemies when you can be frenemies?!

6. Taylor is a Godmother

It turns out that Taylor’s squad is so tight, she’s even the godmother to Jamie King’s son! King is known as a supermodel turned actress and can be seen in flicks such as Pearl Harbor and Sin City. When asked why she selected Taylor for the honorary role for her son Leo Thames, Jamie explained, “I always thought if I were to have another child that she would be the ideal godmother because the way she not only treats me but the way she treats other human beings. She’s so loving and so giving and so generous and she does everything from her heart and she’s incredibly brave and authentic. It’s a very rare thing to come across.” Wow! King really sold Swift as a Saint! I think she may be my first born’s godmother too!

5. Taylor is a Huge Fan of Empire’s Serayah

When you’re the “It” girl of Empire it’s fair to say you’re the perfect edition to the T-Squad! Serayah has fans from Ariana Grande to Oprah, but it’s the Taylor connection that has upped her ante! The young starlet was handpicked by Swift to join her all-star cast in “Bad Blood” despite never having met her. “I hadn’t met her before we shot, but we were texting and talking. She wanted to have that relationship before, so it was more than just work. All the girls in the video are really humble and sweet, from pop star to rock star to super-mega actress to super-mega model.” Hmm…as I’m making my way through this list it’s becoming apparent that maybe Taylor Swift has just signed a legend of a PR rep who has successfully created Taylor-loving fembots!

To say that Gigi Hadid is a successful young woman is an understatement! The girl has graced the covers of Teen Vogue and Vogue Spain and is now the face of Maybelline and Seafolly. Her star power is of course solidified by her position as an integral member of T-Swift’s squad. Gigi joined Taylor on stage in Detroit and flew to England for the London Festival. “My favorite thing about Taylor is that she’s just always herself and she’s really true to that. It’s really inspiring to hang out with someone that is genuine and is just unapologetically Taylor. It’s cool.” And when Gigi’s not busy posing for the highest fashion magazines in the world and singing Taylor’s praises, this babe is chowing down on some good ol’ fashioned Mickey Dees! It’s said to be her fav!

Selena Gomez is a pop princess in her own right and of course infamously inspired Justin Bieber’s hit single “Sorry,” but this young songstress is looking to provide the public with a little bit of inspiration. According to Gomez it is her goal to make people “believe they can do whatever they want” and she works with foundations such as UNICEF in order to reach people. Selena believes that being a member of Taylor’s crew is par and parcel to her pursuits. “A bunch of women I look up to and admire are supporting one another, and Taylor has such a beautiful way of bringing people together. That was good for me, because the more I started working, the more uncomfortable I was. I wouldn’t trust people, and Taylor has a way of stripping down everything and just getting down to being human. I love that.” Sounds like T-Swift’s the leader of a cult…

2. Her Entourage is Worth A LOT!

1. Karlie Kloss is her BFF

Taylor and Karlie are two peas in a pod, as Swift seems to be with all Victoria Secret Angels. They can be seen everywhere together and the singer has even admitted that Kloss has a special room at her pad that contains a basket of Karlie’s fav Whole Foods treats and multiple photos of her on the walls. How sweet…or creepy! The two became buds after Taylor was quoted in US Vogue saying, “I love Karlie Kloss…I want to bake cookies with her.” Soon after the article was published, Kloss reached out via Twitter and the rest is history! T-Swift is picking up babes like MJ picked up kids. Will this too be her undoing? …Too far?