Celebrities You Forgot Appeared On Saved By The Bell 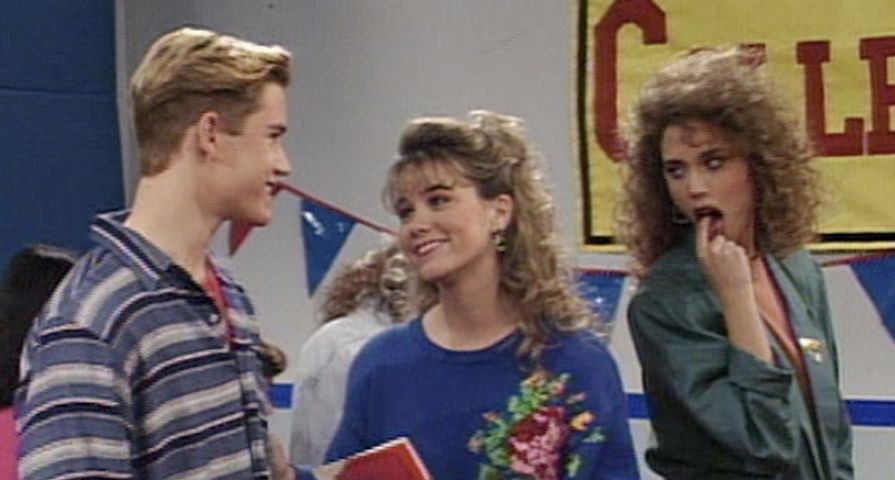 Most fans know that Gabrielle Union’s big breakout role came in 1999’s She’s All That, but before her big-screen role she was making small appearances on popular television shows! In only her fourth TV appearance she appeared on Saved by the Bell: The New Class. She first appeared in the 1995 episode “The Christmas Gift” as a girl named Hilary, but her role wasn’t that significant because in 1996 she was brought back for the episode, “The Tall and the Short of It” as a completely different character. Of course, Union has now gone on to have many popular roles and now has almost 80 acting credits to her name.

Even Punky Brewster made an appearance on Saved by the Bell in the ’90s! In the season four episode “Screech’s Spaghetti Sauce,” Soleil Moon Frye, who was then best known as Punky Brewster on the hit ’80s series, appeared on Saved by the Bell as Robin, a new student at Bayside High whom both Zack and Screech fall for. Unfortunately, Robin had no real interest in Screech and was just interested in him after Screech thinks he “invents” a new spaghetti sauce and hits it big. Of course, after it is discovered his recipe isn’t real, Screech loses everything including Robin who was just in it for the money.

Oh, Milo! Back in the mid-’90s before he had everyone crushing on him as Jess Mariano on Gilmore Girls, and long before he was Jack Pearson This Is Us, Milo Ventimiglia appeared on some of the biggest teen series including The Fresh Prince of Bel-Air; Sabrina, The Teenage Witch; and Saved by the Bell: The New Class. In the season four episode “The Final Curtain” Ventimiglia appeared as Greg, a guy who volunteered at the hospital and, no matter how hard he tried, he just couldn’t land a date.

While most guest stars only appeared in one episode roles on the show, Leah Remini had a multi-episode arc and was one of Zack’s most serious girlfriends aside from Kelly. The popular actress was one of the stars of the Malibu Sands episodes in season three where she appeared as Stacey Carosi, the daughter of the beach club’s owner, for six episodes. Remini was one of the best guest stars on the series, not only because of how amazing she is but because she played a strong and sarcastic woman who was not going to give into Zack’s flirtations easily.

The late ’90s saw the mainstream launch of Tara Reid’s career with roles in The Big Lebowski, Urban Legend, Cruel Intentions and of course, American Pie, but before all that she was getting her start with small roles on TV. In her first major TV role, Reid appeared on Saved by the Bell: The New Class in the 1994 episode “Squash It” as a cheerleader named Sandy.

To most, Scott Wolf will always be known as Party of Five‘s Bailey Salinger, but before becoming one of the biggest heartthrobs of the ’90s with that role, he appeared in Saved by the Bell. While he is best known for his appearance as a Glee club member alongside the gang in “The Glee Club” episode, Wolf actually appeared in eight Saved by the Bell episodes from 1990-1992. In most episodes, he appeared as an extra playing a waiter at The Max, but he also appeared as an extra as a movie patron. Aside from Party of Five, Wolf is now also best known for his roles in Everwood, Perception and The Night Shift.

1992 was a big year for actress Bridgette Wilson-Sampras! She not only landed a starring role in the series Santa Barbara, but also appeared in four episodes of Saved by the Bell as Ginger, a stereotypical ditsy blonde who Zack falls for when he isn’t pining over Kelly. After her starting roles, she went on to star in movies such as Last Action Hero, Billy Madison. Mortal Combat, I Know What You Did Last Summer, The Wedding Planner, and Shopgirl.

There was no better-known radio personality than Casey Kasem in the ’90s, so it was only fitting he made his way to TV in an amazing Saved by the Bell cameo. In season two, Kasem appeared as himself in the episode “Dancing to the Max” where he hosted a dance contest held by the students in an effort to save The Max. He also lent his voice to the season three episode “Rockumentary” which he narrated as Zack dreams of the group as the Zack Attack which has a sudden rise and fall in fame.

Before James Marsden was charming everyone with his leading roles in movies such as X-Men, Enchanted, The Best of Me, and 27 Dresses, he was getting his start with one of his first roles in a season one episode of Saved by the Bell: The New Class. Marsden played homecoming King Chad Westerfield who pretends to befriend everyone to get the votes only for it to be exposed that he really is a bully who picks on “nerds.” Everyone has to start somewhere!

Just as she was getting her big break in Beverly Hills, 90210, Tori Spelling had one of the most surprising and one of the best Saved by the Bell guest appearances when she appeared as Violet Bickerstaff in three episodes during season two. Even though her guest role was only in three episodes, it remains one of the most memorable to fans because Violet is the reason Screech at least attempts to move on from his massive crush on Lisa Turtle, as Violet showered him with love and affection and even called him “Samuel” instead of Screech.

Before Christine Taylor was starring in films, she was getting her start on TV which included a single episode appearance in season three’s “S.A.T.s” Taylor appeared as Heather Brooks, a hard-working student who is impressed after Zack scores higher than even Jessie Spano on his S.A.T.s and begs him to help her study and, of course, he doesn’t mind at all. At the time, Taylor was known as Melody Hanson in the series Hey Dude and went on to star as Marcia Brady in The Brady Bunch Movie and has starred in several films since including The Wedding Singer, Zoolander, and Dodgeball, alongside her now ex-husband Ben Stiller.

Even watching Saved by the Bell back now, Eric Dane fans might not be able to recognize him in his small role on the show. In his first ever on-screen credited role, Dane appeared as Tad Pogue in the 1991 episode “The Game.” Pogue was a rival to Zack as one of Stacey’s ex-boyfriends and one of their opponents in a high-stakes beach volleyball game. Now, the handsome actor is better known to TV fans as Mark “McSteamy” Sloan on Grey’s Anatomy and The Last Ship‘s Tom Chandler.

Back in 1991, season three of Saved by the Bell moved the gang from the halls of Bayside High to the beaches of the Malibu Sands beach club where Lisa’s parents were able to land all of the kids’ summer jobs. Fans will remember these as some of the show’s most fun episodes, and also saw some great celebrity appearances including Denise Richards in “The Last Weekend.” As the last episode of the Malibu Sands adventure, Denise Richards portrayed beach babe Cynthia who pretends to drown just so A.C. would save her! At the time, the role was uncredited and was only Richards’ second on-screen role. Now, she is a well known Hollywood actress who has more than 80 acting credits to her name.