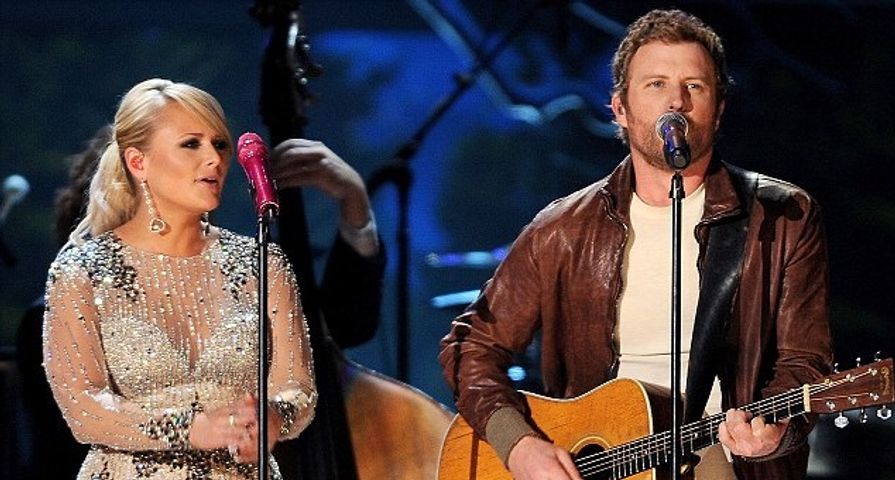 Tour life is a part of being a musician and sometimes it’s hard when they have to be on the road for many months at a time, but it also seems like it could be a lot of fun, especially when they have a close relationship with their fellow touring artists. Long tours with nothing much to entertain themselves sets the stage for some major pranks to go down and it seems like anything is game when its the last show of a tour! Here’s a look at 11 of the best country tour pranks!

Kip Moore found the perfect way to kick off his tour with Dierks Bentley, while also getting revenge on him for a previous prank. The main target was Dierks’ beloved Chevy truck named “Big White.” With a little help from Dierks wife, Moore found Dierks truck parked outside a Nashville publishing company where he was inside at a writing appointment. Moore arranged for his team to fill the entire cab with Styrofoam peanuts, draw all kids of graffiti on the front, sides and back of the truck and then to top it all off — they filled the bed of the truck with hay and put a billy goat inside! It’s safe to say Dierks was totally surprised when he came out and quickly figured out who the culprit was when he saw the sign “I’m To Blame.”

Brad Paisley is often credited as the prank master, but that doesn’t mean he isn’t sometimes on the receiving end of it! In 2007 he met his match when fellow country singer Kellie Pickler decided to start bringing a bunch of chickens on stage during one of his acoustic performances in North Carolina. He was singing “Dixieland Delight” when Pickler came out dressed in overalls, a plaid shirt, some fake hillbilly teeth and pigtails and holding a live chicken! She casually placed them one by one around him as he sang the song. Paisley managed to make it to the end of the song, but he definitely had a hard time finishing by the end!

It seems livestock running loose on stage during a country concert isn’t an unusual thing! Darius Rucker fell victim to this prank during a performance in Columbus, Georgia, back in 2010. The masterminds behind the prank were his tour mates, the members of Rascal Flatts! This was a two-part prank…first they let the goats into his dressing room backstage to mess things up a little, and then had them walk the stage like it was a fashion show, down the catwalk while he sang the song “Family Tradition.” Rucker was totally caught off guard when the first goat went past him, and then another, and another. To top it all off, he went back to his dressing room after the show to find a sign on his door that read, “Darius Rucker Dressing Room and Petting Zoo.”

We’re pretty jealous of whoever was around when this prank took place. Tim McGraw didn’t get too creative when he pranked Lady Antebellum, but we’ll forgive him because it involved him dancing around shirtless on stage. Lady Antebellum were singing their song “Love Don’t Live Here” when McGraw ran on stage in nothing but gym shorts and a bandana, with a bunch of other shirtless crew members and started doing jumping jacks around them as they performed. The pranksters didn’t last too long and eventually trotted off stage a few minutes later, but we’re guessing that was one performance fans won’t forget!

Country concerts are often high energy, but sometimes artists tone it down for an acoustic set, and dim the lights which sets the stage for the perfect prank! In 2007, Miranda Lambert pulled a fast one on Dierks during one of his acoustic sets when she swapped out his guitar for a hot pink axe. When he went to grab the guitar and found the axe he tried to continue on with the song, but didn’t even make it through the first verse before he started cracking up! Don’t worry, Dierks got his revenge on Miranda by later dropping ping pong balls on her head while she sang. “We got a big bucket of ping-pong balls up in the rafters, and throughout Miranda’s whole first song, we’d let them fall, two by two, on her head,” said Dierks.

The single “White Liar” is one of Miranda Lambert’s biggest hits and tells the story of a woman confronting her man for cheating. Well, this song definitely provided the perfect opportunity for Brad Paisley, who is known for taking his pranks to a whole new level, to not only prank Miranda, but also her husband at the time, Blake Shelton! When Paisley and Lambert were on tour together, he decided to give her performance an unexpected prop while she sang the song “White Liar.” He hijacked the giant screen behind her and projected a bunch of photos of Shelton with other women! “They were all from his meet and greets, but it was very fitting with the song!” said Paisley.

Carrie Underwood has definitely learned a thing or two from her CMA co-host, Brad Paisley, when it comes to pranks. She pulled a fast one on the popular musical group, Little Big Town, in 2008 on the Carnival Ride Tour when she convinced the audience to yell “Boo!” each time they introduced one of the band members to the crowd. It was a mean trick, but really funny! She made arrangements so that the screen behind the band displayed the word “Boo” at the moment each band member was being introduced and luckily the crowd played along. Poor Kimberly Schlapman didn’t know what was happening at first and said “OK, that doesn’t usually happen!” and then, when they realized what was going on, she said, “That made me sweat!”

Who would have thought the seemingly innocent, goody-two-shoes looking country singer was such a prankster? She decided to engage in a little end of tour hazing against Hunter Hayes during her 2013 Blown Away tour. She hijacked his set while he was singing “Light Me Up” and replaced the video feed in the background with the sound of a goat! The ‘yelling’ from the goat was perfectly timed up to the chorus of the song so every time he sang the word ‘up’ the goat would come onto the screen and interrupt his vocals. We’re guessing this was a little back up singing that Hayes didn’t ask for…and it definitely goes down as one of the best country tour pranks!

3. Brad Paisley and The Band Perry

This is one of Paisley’s most memorable pranks — and he’s got a lot! He decided to play a trick on The Band Perry during their opening number of a show. Similar to something many of Carrie Underwood’s pranks, he hijacked the giant screens behind them and changed it from their original video to the title sequence of the kids show the Doodlebops! It was completely random, but totally hilarious. He even went to the trouble of detailing each of their names in the place of the character. The Band Perry managed to keep it together throughout the whole ordeal and tried to act as unfazed as possible, but we’re pretty sure they got back at him after the show!

Blake Shelton has a great sense of humor, but he didn’t seem too fond of this prank! He definitely took it like a champ, but it led him to admit on stage that he hates end of tour pranks! We’re guessing he doesn’t like surprises too much. Blake Shelton had just introduced a duet he was about to sing on stage with his runner up from season 1 on The Voice, but when the song cued up and he was about to start singing, something happened he wasn’t expecting. Shelton’s manager walked out on stage, lip syncing the lyrics of the song with a wig and dress on pretending to be Dia Frampton! It was absolutely hilarious! Shelton let the prank go on for a minute or two, but eventually shooed him off stage and demanded the real Frampton come out and sing the song. He jokingly called the experience “scarring.”

Finally Brad Paisley got a taste of his own medicine when Jewel arranged for him to get arrested when his private plane landed in Nashville early one morning. Paisley stepped off the plane and was immediately greeted by a few officers who proceeded to handcuff and arrest him! Paisley was totally caught off guard and looked visibly nervous as he proceeded to say, “You’ve gotta be kidding me! I’ve never done anything wrong in my life.” The officers told Paisley that he was under arrest for “serious crimes” and placed him in the back of a squad car. They told him he was being charged with “excessive noodling,” which was when Paisley finally figured out he’d been pranked and admitted to his guilt before breaking out in laughter. It turns out Jewel has some old friends who are retired police officers!