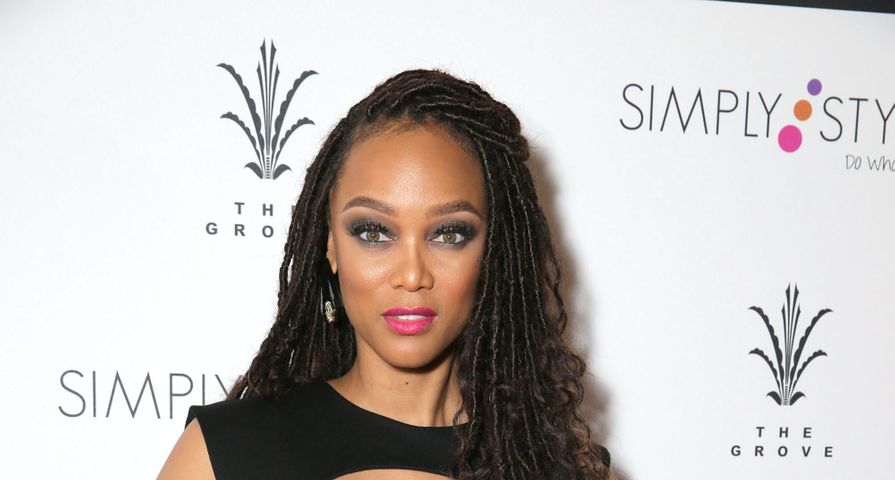 Tyra Banks is one of those celebrities that everyone seems to know. Not only was she a super successful model, but she also has gone on to dominate almost every other facet of the industry as a businesswoman, actress, author and producer. Having started modeling at the age of 15, she has now been in the industry for over 20 years and in that time has accumulated a ton of fans, and yet there is still so much to know about the stunning star. Check out these 10 things you didn’t know about Tyra Banks:

When Tyra Banks was only 15 years old she began pursuing her passion for modelling, and was actually rejected by four agencies before being signed to L.A. Models and then switched to Elite Model Management, and faced even more difficulties in the super competitive industry because many considered her “too ethnic.” At the time, black models were still not common and Banks is known as one of the pioneers for black women in the industry. In 1991 she was sent to Paris for her first ever runway show and impressed so many designers she ended up booking 25 shows which had never been done by a newcomer before, officially launching her into supermodel status.

In the mid-90s, Banks began to gain weight, which is unacceptable in the model world, so after moving to Milan for runway work she decided to move back to the U.S. where she used her curves to become one of the most successful lingerie and swimsuit models of her era. Modelling also changed in the mid-90s because of the “grunge phase” so Tyra took the opportunity to branch into acting. “This new grunge thing was happening, and it was anti-supermodel. The designers didn’t want to pay these big fees. I wasn’t panicking because I always had plans to do different things. At the time, it wasn’t announced yet, but I had signed on to be on The Fresh Prince of Bel-Air. I was like, OK, while these designers are taking a bit of a supermodel break. I’m going to act, so I’m all good.”

Tyra Lynne Banks was born on December 4, 1973, in Inglewood, California to Carolyn London and Donald Banks, and became the younger sister to her brother Devin who is five years older. Her mother worked as a medical photographer while her father was a computer consultant, and when Tyra was six years old, her parents decided to get a divorce. Tyra attended John Burroughs Middle School and then Immaculate Heart High School which she graduated from in 1991. When she was 12, she was first introduced a little bit to the modelling world as her mother worked as a glam photographer on the side. “When I was 12, I would hold the brushes and the light meter and reflector. So I learned about makeup, and I learned tips and tricks on how to shade faces. This was before retouching,” Banks revealed.

One of Tyra Banks’ most successful ventures with her Bankable Productions business has been the creation of the hit reality competition series America’s Next Top Model. While fans have tuned into the series for 22 cycles or seasons already, some of the former competitors have spoken out about mistreatment by Tyra and the show. Season one winner Adrianne Curry went public in 2007 claiming that, despite being promised money as well as contracts for winning the series, she hadn’t seen a dime for the work she did with Revlon. She went on to claim that the girls were barely allowed to sleep during filming, were “kept hungry” and were forced into small quarters for the sake of drama. Then in 2015, Tyra and ANTM‘s makers were sued for $3 million by Angelea Preston who won cycle 17, but had her title was taken away after it was revealed she had worked as an escort in her past. Preston also claimed that the girls were treated inhumanely, and Banks “cynically exploits” them.

In 2009, people were horrified when the news of Chris Brown abusing his then-girlfriend Rihanna went viral, and it sparked a long conversation about domestic abuse. In an interview with Oprah Winfrey, Banks and Winfrey discussed the two stars and domestic abuse, and then Banks revealed she had previously been in an abusive relationship herself. Banks said that in her early 20s she was emotionally abused by her boyfriend. “He never hit me, but I would say there were blows to my spirit, blows to my emotional well-being every day.” She went on to say he was great at seeming like a great guy when they were out in public so her friends never took her complaints seriously, and she eventually asked her mother to “pull her” out of the relationship, but her mom said she had to do it on her own. Eventually, Banks said she finally confronted herself in the mirror, and worked up the courage to leave for good.

In February 2012, Banks started referring to herself as a “Harvard graduate” after she completed the nine week Owner/President Management Program (OPM) there. Banks stated she did the program in order to become a better businesswoman ahead of the launch of her cosmetics line “Tyra Beauty.” Afterwards, however, Banks came under fire for suggesting she had a diploma from Harvard when in reality the program only gives out a “Certificate of Completion,” and others called the venture a publicity stunt and suggested she got paid to do it, but Banks refuted that. “It’s not a licensing deal. A lot of deals in our industry are licensing deals. You go to a company; they pay you a fee. You sit and you develop stuff with them, and you put it out. Mine is a 100 percent entrepreneurial venture, no licensing. There’s no person that’s paying me. It’s all 100 percent self-funded.”

As one of the most notable supermodels of the ’90s, a businesswoman, host/creator of America’s Next Top Model, and so many other credentials under her belt, it would be safe to assume Tyra Banks has a pretty impressive net worth. Thanks to all her hard work, which also includes being an author, singer and an actress, she has an estimated net worth of $90 million!

Despite being one of Hollywood’s biggest stars, Banks has always been extremely skilled at keeping her personal life outside of the spotlight as much as possible, especially when it comes to her relationships. Over the years she has been rumored to have dated many men, but some of her most notable relationships have included former basketball player Rick Fox, director and producer John Singleton, singer Seal, former hockey player Mark Messier, and businessman John Utendah. In 2013, however, her string of dating stopped when she began seeing Norwegian photographer Erik Asla, and in January of 2016 the pair revealed they had welcomed a son via surrogacy, York Banks-Asla. Unfortunately, the couple split in October 2017.

This is the Happiest Valentine’s Day of my life. York, Daddy, and I send you so much love.

Despite being an infamous supermodel, Tyra Banks has had an ongoing battle with her weight that has been followed closely and often criticized by the media. Tyra has admitted that from a young age she loved food: “I was taught to enjoy food, not to fear it, and wasn’t a large child but wasn’t skinny either. Things changed drastically for her when she was 11 which saw a young Tyra grow three inches in height and lose 30 pounds. She said she lost so much weight so fast, many assumed she had an eating disorder and she was even brought to a doctor to figure out why she couldn’t put weight on. In the years after her weight often fluctuated, and in late 2006 things came to a head when a tabloid posted unflattering photos of Banks in a one-piece swimsuit. The photos led to her now infamous reaction on The Tyra Banks Show a few months later in which she appeared in the bathing suit and fought back tears while telling critics, “Kiss my fat a–!”

Over her many years in the industry, rumors have circulated that, despite appearing caring and compassionate on her TV shows, Banks is actually a pretty mean celebrity, and she has admitted herself that she at least used to be a “mean girl.” “In middle school I was popular, gossipy, and if I didn’t want one of the other girls to be in the clique anymore, for whatever tiny little reason, I voted her out.” She found herself on the receiving end of the bullying a few years later, however, after she lost a bunch of weight and grew taller than her peers, and said her classmates gave her cruel nicknames.