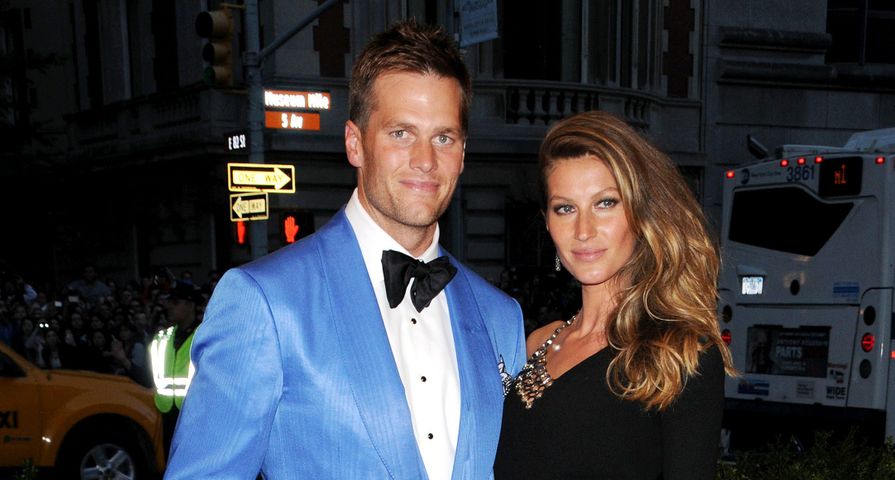 Separately, Tom Brady and Gisele Bundchen are two of the most famous people on the planet, and together they form one heck of a celebrity power couple. The five time Super Bowl winning New England Patriots quarterback and the iconic supermodel have now been married for nine years and support each other through all of the highs and all of the lows. Despite their level of fame, the two are actually very good at keeping their personal life out of the spotlight, and since they are one of the most beloved and most adorable couples, we found out some interesting facts about their relationship! Check it out:

So how exactly does one of the NFL’s hottest players and one of the world’s most notable supermodels meet? Many would imagine at some A-list celebrity soiree, but that isn’t the case for Brady and Bundchen. The two got together after someone they only credit as a “mutual friend” introduced them. “This friend told me he knew a girl version of me,” Brady stated in an interview with Details while Bundchen chimed in, “And [the friend] said to me he’d found a boy version of me.” In a separate interview to Vanity Fair, Bundchen gushed about first meeting Brady, stating, “I knew right away — the first time I saw him. We met through a friend. The moment I saw him, he smiled and I was like, That is the most beautiful, charismatic smile I’ve ever seen! We sat and talked for three hours. I had to go home for Christmas, but I didn’t want to leave. You know that feeling of, like, you can’t get enough? From the first day we met, we’ve never spent one day without speaking to each other.”

While everything was going very well for the new couple, they did hit a bump in the road when Tom Brady’s ex-girlfriend actress Bridget Moynahan announced she was three months pregnant in February 2007. The timing meant Brady and Bundchen hooked up as soon as he split from Bridget, but also that he left her around the time she became pregnant. To many, it looked shady on Brady’s part and years later Moynahan spoke out about the time saying it was a “traumatic time of being heartbroken and pregnant,” and added, “it was f–ked up.” Later, Gisele opened up about how it almost ruined their young relationship. “It was a challenging thing. Here I am, thinking I’m dating this guy, we met and we started dating and everything’s great. Then this happens. I felt like I didn’t know what to do. It was one of those moments, do I just run away? And now, eight years later, I couldn’t have asked for a sweeter bonus child.” Despite the drama, the three parents are very amicable, and all have a relationship in the best interest of raising Jack to be happy and loved.

It is in no way surprising that Tom Brady and Gisele Bundchen make a lot of money, but many wonder just how much money is a lot? According to sources, the power couple’s combined net worth is an absolutely astounding $540 million. Although Brady is one of the NFL’s most elite quarterbacks it is Gisele who brings in most of the money. She has a solo estimated net worth of $360 million while Brady is sitting on around $180 million.

The famous couple got married on February 26, 2009, in a small Catholic wedding at St. Monica Catholic Church in California. They then held a second wedding ceremony with a destination wedding to Costa Rica in April that same year.

Despite demanding careers, the two have taken the time to form an adorable family, welcoming their son Benjamin in December 2009 and their daughter Vivian Lake in December 2012, and have set up different home units. In January 2012, they purchased a $20 million mansion in Brentwood, Los Angeles, and the next year they bought a $14 million condo at One Madison in Manhattan and began construction on a new mansion near Boston. In 2014 they sold their massive Los Angeles home to Dr. Dre for $40 million and in 2015 moved into their completed Boston mansion. Among many features, the mansion boasts a massive garden where a lot of their food comes from.

Celebrity diets are strict but when it comes to an elite athlete and an elite supermodel together it can only be imagined what kind of super strict diets they follow…until now. Unsurprisingly, the two have their own personal chef, Allen Campbell, who opened up about what it is like cooking for the Brady-Bundchen family. “So 80 percent of what they eat is vegetables. The freshest vegetables. If it’s not organic, I don’t use it. And whole grains: brown rice, quinoa, millet, beans. The other 20 percent is lean meats: grass-fed or organic steak, duck every now and then and chicken. As for fish, I mostly cook wild salmon,” he told Boston.com. He added that he never uses white sugar, white flour, or MSG while coffee, caffeine, and dairy are also ruled out. Campbell noted that the kids have embraced the food as well mostly because they know nothing different. “Vivi was only nine months when I started, so I gave her first food. And 90 percent of the time they all eat the same thing. I cook for the kids, but Gisele makes Benny’s lunch to take to school she packs that herself.” Cooking by such tough guidelines for people who are very dependent on a healthy diet may seem difficult, but Campbell doesn’t mind. “If I was cooking for anyone else who didn’t respect and appreciate my food as much as they did, it wouldn’t be as gratifying for me,” he confessed. “I think that’s what makes me happy at the end of the day.”

In 2015, for the first time since the bump-in-the-road at the beginning of their relationship, the pair were engulfed in many rumors suggesting their marriage was close to crumbling. Brady’s name was already being dragged through the mud because of an NFL controversy dubbed “Deflategate,” suggesting Brady had knowledge or even ordered the New England Patriots’ equipment staff to let air out of the balls used in the AFC championship game in 2014 against the Indianapolis Colts. As Brady went in and out of court and was obviously upset by the smear on her reputation and career, reports surfaced that it had changed things in his relationship with Gisele and she was threatening him with divorce. After all the rumors calmed down, Bundchen spoke out saying that they have had difficult times, as any marriage does, but it wasn’t as bad as the media made it seem. “I think we’ve been through a few tough times together,” Bundchen said of the two working through it. “I think that’s when you know who are your friends and who loves you. My father always said the quality of your life depends on the quality of your relationships and I think, no matter how challenging it was, we’ve always been supportive of one another and I think that’s the most important thing you can have in life, you know, a support system and love.”

Tom Brady has A LOT of fans cheering him on every NFL Sunday, and one of the loudest is Gisele. Whether at the stadium or at home, Gisele has always been very supportive, but the support and enthusiasm definitely go both ways. Much like his wife at his games, Brady went to as many of Gisele’s fashion shows as much as he can, including her very last runway walk. He also posted a very sweet note writing, “Congratulations Love of my Life. You inspire me every day to be a better person. I am so proud of you and everything you have accomplished on the runway. I have never met someone with more of a will to succeed and determination to overcome any obstacle in the way. You never cease to amaze me. Nobody loves life more then you and your beauty runs much deeper then what the eye can see. I can’t wait to see what’s next. I love you.”

Brady and Bundchen’s mutual friend set them up because he felt their drive and work ethic is very much on the same level, but Bundchen stated, “I would say he’s much more competitive than me. I’m much more of a collaborative person. Because in my job, it’s about collaboration.”

Being from Brazil originally, Gisele’s first language is Portuguese and as a result, she and Brady are raising their children to be bilingual. In an adorable story, Brady revealed that he likes to read to his kids before bed and he “can’t speak Portuguese at all!” and his kids find his mispronunciations hilarious. “We have a lot of Portuguese books in the house and those are…funny! My kids can speak Portuguese, but I can’t read it, so I probably screw up half the words. If they want to pick one of those books, they can, and that’s one of the ones that I read. It’s hard.” The quarterback also offered some more adorable insights into his very private life stating that he is the mellow parent while Gisele is more strict and some of his favorite times are driving the kids to school in the morning. “We sing a lot! They love the song ‘Radioactive.'”