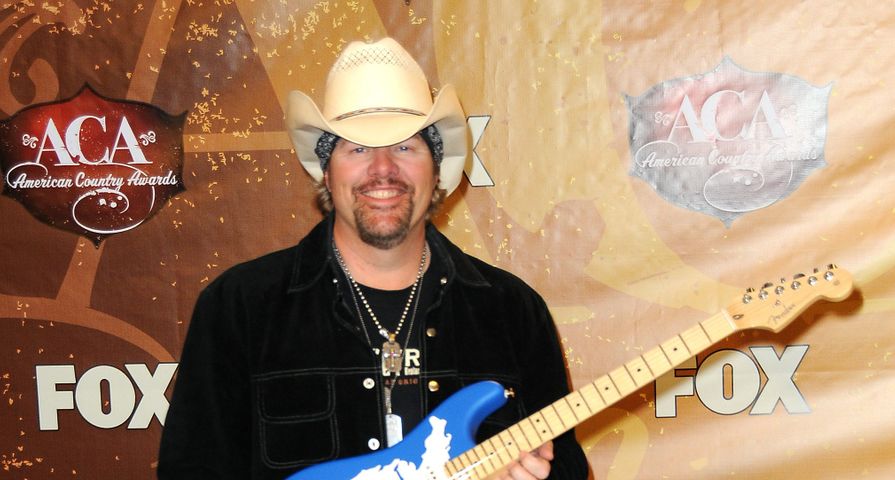 Toby Keith is one of country music’s most iconic stars from recent years, and has expanded his name into a brand with Toby Keith restaurants all around the U.S. Even though he has been in the industry for decades and recorded some of country music’s most memorable songs, Keith has never been one to soak up the spotlight (aside from that well documented Dixie Chicks feud). Instead he likes to play his music and his live his life off-stage as privately as possible, which only leaves fans wanting more! Get to know the 54-year-old star a little better with these 10 interesting facts!

Toby Keith Covel was born on July 8, 1961 in Clinton, Oklahoma to Carolyn Joan and Hubert K. Covel Jr. His family lived in Fort Smith, Arkansas for a few years when Keith was young, then moved to Moore, Oklahoma. While in Fort Smith, Keith would spend much of his summers with his grandmother who owned Billie Garner’s Supper Club, which is where he first became interested in musicians and even got up on the bandstand to play with the band.

Happy Mother’s Day to my mom and all the mothers out there who raise kids that like to raise a little hell. – T

Over the years, Toby Keith has become one of the most successful country music acts of all time, selling more than 40 albums worldwide, and he is now sharing his wisdom of the industry with up and coming stars. After hearing Brantley Gilbert for the first time, Toby Keith took him out on tour and has been a huge influence on Gilbert’s ever-rising career.

In 2005, Keith expanded his career by going into business when he opened the first Toby Keith’s I Love This Bar & Grill in Oklahoma City, Syracuse, New York, and Tulsa, Oklahoma. The brand has now expanded with restaurants all across the U.S. including Michigan, Kansas City, Arizona, Minnesota and Colorado, just to name a few. What most fans don’t know however is that Keith does not actually own the new restaurants which are franchised under the Scottsdale, Arizona company Capri Restaurant Group Enterprises LLC., which purchased the master license agreement to build more Toby Keith restaurants across America. Aside from the restaurants, Keith also launched his own line of clothing, TK Steelman in 2009, and in 2011 he introduced a new drink called “Wild Shot” and it is a featured drink in the Toby Keith restaurant chain.

Before music became his main focus, Toby Keith had his eyes on a football career. He began playing at a young age and while attending Moore High School he played defensive end. He went on to attend the University of Oklahoma where he landed a spot on the Oklahoma Sooners football team, but he never played a game before dropping out to pursue playing semi-professional football in OKC. After awhile he realized he was never going to make it big in the sport, and decided to go after his first love of music for a career instead. He is still an avid football fan, however, and has transferred his love to his son Stelen who was a high school football standout.

Toby Keith’s first ever gig as a performer was for a wedding where he made $1,000, and said it was “easy money” then decided to call his band the Easy Money Band. He began distributing copies of their demo tapes in the early ’90s by heading out to Nashville, but was forced to return home after getting no interest from any labels. One of the best known stories of his career is that it was a flight attendant who was a fan of Keith’s who ended up landing him a record deal by giving his demo tape to Harold Shedd, an executive at Mercury Records. That story is only partially true, however, as Keith did know the flight attendant — she wasn’t a random fan, but was actually dating the drummer of his band at the time. After seeing Keith perform for the first time, Shedd immediately offered him a contract to sign with Mercury.

Despite incredible success and a busy career, Toby Keith has never let any of it detract from his home life. Keith married his wife Tricia Lucus on March 24, 1984, long before his huge career. When he married Lucus he adopted her young daughter Shelley and together Keith and Tricia welcomed daughter Krystal and son Stelen Keith Covel. He is also now the grandfather to Shelley’s two children. Keith was also awarded an honorary degree from Villanova University, which he attended for one year from 1979 to 1980 before attending the University of Oklahoma.

After graduating high school, before pursuing football, Keith worked as a derrick hand in the oil fields and, before he was 20, he had become an operations manager. It was around this same time he started up his band and had to leave in the middle of some gigs if he was paged to come work in the oil fields. In 1982, the oil industry in Oklahoma took a dive and that was when he once again focused on football training and played with the Oklahoma City Drillers.

“How Do You Like Me Now?” still remains not only one of Toby Keith’s biggest hits of all times but one of the biggest radio hits of the country music industry, but it was a hard fought battle for Keith to have the song recorded and released. He asked to be let go from Mercury Records after they refused to release that single and the album it was on, so he had to buy back his own music and in 1999 moved to Dreamworks Records in Nashville, but they also refused to release it as a single, and instead chose the now forgotten “When Love Fades” as his first single, but it failed to reach the top 40. After the song’s poor performance, Keith finally convinced the label to give “How Do You Like Me Now?” a chance, and it went on to spend five weeks at number one on the country music charts, became his first top 40 hit and also became the top country song of 2000. In 2001, Keith won the awards for Top Male Vocalist and Album of the Year at the Academy of Country Music Awards thanks to the single and its album. How do you like me now, indeed.

On March 24, 2001 which was incidentally Toby and Tricia’s 17th wedding anniversary, Keith lost his father, Hubert K. Covel Jr., in a car accident on Interstate 35. Keith’s father was driving his car on the interstate when he was bumped by another vehicle and was sent across the center median where he was struck head on by a charter bus owned by Rodriguez Transports. The driver of the car who hit Covel fled the scene. Six years later, the Covel family was awarded $2.8 million for the wrongful death of H.K. Covel after police discovered that the bus was not properly equipped with airbrakes, and the driver did not have the proper license to drive a commercial charter bus. Keith has stated his hit song “Courtesy of the Red, White and Blue (The Angry American)” was inspired by his father’s death and the September 11, 2001 attacks.