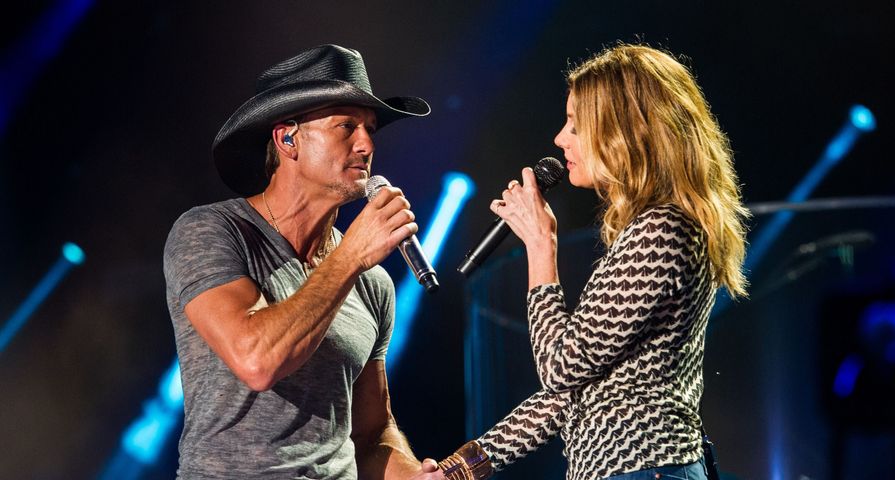 These two are country’s most beloved couple! Tim McGraw and Faith Hill have ruled country music since the mid ’90s, not only with their amazing talent, but also their high profile marriage. These veteran singers have both been in the music industry for a long time and together have been dubbed the king and queen of country. The thing that makes them so popular and special to their fans is their endearing love story. As a couple who’ve grown together in the public eye, the cards have always been stacked against them, but they remain closer than ever and more in love each and every time we see them! They both rose to huge success together as a duet, and as solo artists. Despite being in the public eye for a long time, these two are fiercely private celebrities, especially when it comes to their three daughters. So we’ve decided to take a closer look and found 10 things you might not have known about Tim McGraw and Faith Hill’s relationship!

Tim has revealed in more than a few interviews that he used to be quite the drinker in the past and used alcohol for liquid courage before going on stage. However, he learned that if he continued to do so it would become a problem and it was affecting his family life that he was trying to build with Faith. In an interview with People magazine, Tim said, “Faith has kept me alive. She’s saved my life in a lot of different ways – from myself more than anything. She’s loved me through times when I didn’t love me.” When they asked what would have happened if he hadn’t met Faith, he said: “I’d be dead. Oh yeah, I would have partied too hard. I might have caught myself somewhere along the way and put the brakes on. I don’t know if I would have gone [to rehab]; I don’t think I could have been talked into doing that during those times.” Tim also credits his weight loss and new interest in health and fitness to cutting out alcohol.

9. Secret to a Long Lasting Marriage

This upcoming October Tim and Faith will be be celebrating their 21st wedding anniversary! Their marriage is a huge inspiration, especially when it comes to show business. A marriage that long lasting is extremely rare and these two continue to melt our hearts because they seem to be just as in love today as they were 21 years ago! So we’d all like to know what their secret is?! It’s a common question when either one is interviewed by the press and the answer seems to be that they both have strong family values and are adamant about living a normal life when they aren’t working. In an interview E! News, McGraw said, “I think, for us, being as normal as possible and raising our family and being in a family situation as much as possible…Certainly it’s different because of what we both do, but we try to keep it as much of a family environment that we can.” Faith put it perfectly when she stated: “My husband and I have made the choice that our marriage is the most important thing to us. We respect what we have and understand how we need to feed it.”

One of our favorite things about this country couple are their endearing duets. These two have managed to mix work with pleasure ! Tim and Faith have released some huge hits together like “It’s Your Love,” “Just to Hear You Say That You Love Me,” “I Need You,” “Let’s Make Love,” “Shotgun Rider,” and most recently, “Meanwhile Back at Mamas.” Surprisingly, neither one does duets with any other artists except each other, and Tim said that’s because he finds it hard to harmonize with anyone other than Faith. In an interview with CNN, McGraw said, “I guess there’s people that don’t blend well but I think for us, I mean really she’s the only person that I can sing harmony with. I’m not much of a harmony singer, so and I think it’s because I just hear her voice all the time and I know what she sounds like and I know her phrasing and all that thing.” Tim and Faith have been extremely lucky that they have been able to collaborate on albums and tour together, which also helps keeps their relationship strong. He gushes about her incredible talent: “The chances that we’ve gotten to tour together, sing together, I mean, how many people get to do that in their lives? It amazes me every night, every chance that I get to sing with her.”

7. They Fell In Love on Tour

In an interview with Larry King, the country couple gushed about how it was basically love at first sight. “It’s always been magic from the first, the first time that we performed together on stage, which was spontaneous combustion…We fell in love on that tour and sang together night after night and it was just beautiful.” McGraw chimed in during the interview and recounted how the two first met which was at a radio seminar in Nashville which is an annual event when all the stations come together and artists perform. He said, “I think this was probably in ’95, ’94-’95, and Faith and I both did the New Faces Show. And we just met briefly backstage and that was the first time we met, so it wasn’t really a meeting. And then, we did a show together like an outdoor festival show together after that we had planned to do the tour and we just, we met there and then we started the tour probably about four months after that.” The chemistry between these two was instant, although Tim did say he chased her for a little while, but once Faith got to know him and learned he was a family man, she let her guard down and things got serious really quickly — they toured, got engaged, pregnant and married all in the same year!

We now know that Tim and Faith both have extremely strong family values and both come from Southern families where tradition means a lot. When the holidays come around, tradition in the Hill-McGraw household is at its strongest and similar to many other families. They have a lot of little gimmicks in the day that have become sacred to them. We’ve all noticed Tim McGraw is extremely romantic and affectionate towards Faith which makes us all incredibly jealous, but Faith shared a cute story about their Christmas tradition that just takes the cake! She said, “The first year we were married and that we had Gracie, Tim wrote me a letter that he put in my stocking. And he wrote one for Gracie, too. Now he does it every year. I get a letter from him in my stocking, and so do each of the girls. I can’t even tell you how much that means to me.”

Like many other marriages in the public eye, Tim McGraw and Faith Hill have been the subject of tabloid rumors over the past 21 years, but they’ve survived through it all! Not that long ago in 2014, the couple had their most recent run-in with the tabloids when Star Magazine printed a cover story titled “Tim McGraw & Faith Hill’s Marriage From Hell” and stated the pair was getting a $135 million divorce. But these two are veteran stars in the business and they know not to sweat the small stuff because it all comes with the territory. McGraw said it only bothers him when the children are involved. He told Entertainment Tonight, “Since we’ve been together, we’ve been getting divorced the next year. The only time it becomes something, it doens’t upset me but it makes me take pause, is when you have kids and when your kids see something in a supermarket line or they hear something from their friends.” Faith doesn’t let it bother her either: “I’ve had an affair with my makeup artist, a female; an affair with my hairstylist; my marriage is on the rocks; (daughter) Maggie is not Tim’s child. The naysayers. I don’t need their approval. I have too much going on. If that’s their entertainment, fine.” One thing is for sure, they definitely ward off the naysayers with their constant displays of affection!

in 2015 Tim McGraw and Faith Hill celebrated their 19th wedding anniversary! McGraw got really candid about how the whole proposal went down and filmed a tribute in the exact place it happened. On June 26, 1996 in the dressing room at the Grand Junction in Colorado, the couple was touring together and had only been dating for several months when McGraw started joking about getting married. “I looked at her, grabbed her by the hand…And I said, ‘I’m really serious. I want you to marry me.” Hill laughed off the proposal and said, “‘We’re at a country music festival in a trailer house, and you’re asking me to marry you?’ And I said, ‘Yeah.’ So I went onstage.” However, she quickly had a change of heart, because when he came back from his performance, he found a message in his dressing room. “I had in my dressing room…this foldout case that had a mirror in it that was my dressing armoire. I still have it to this day. When I came back offstage, [I saw] a Sharpie with lipstick kisses all over it, saying, ‘Yes! I am gonna be your wife.’ It had, ‘I love you’ with big lipstick kisses. And this is the place right here.” They got married a few months later on October 6, 1996 and now have three daughters together, Gracie, Maggie and Audrey.

3. She Was Engaged When They Met

When Faith Hill met Tim McGraw for the first time back in 1996, she was engaged to record producer Scott Hendricks, but she makes no apologies about leaving him for McGraw. In an interview with People she said, “If someone is going to judge my character because I was engaged to somebody and then I left him for somebody else — ‘Oh, okay, now she’s a slut and a bad person’ — I can’t control that. But I wasn’t about to let Tim slip through my hands.”

Being a musician means a lot of time is spent on the road away from friends and family, but not for Tim and Faith. These two haven’t made it this far in their marriage while balancing their careers as mega country stars for no reason! Their secret is to spend as little time apart as possible. The rule of thumb is not to spend more than three days apart at a time, so Faith will often travel on the road with Tim.

In an interview with RealBeauty.com, Hill revealed that our favorite rugged country crooner will use her beauty products and vice versa. This is a whole new level of sharing! She said, “Tim always steals my lotion and I always steal his shower gel.”