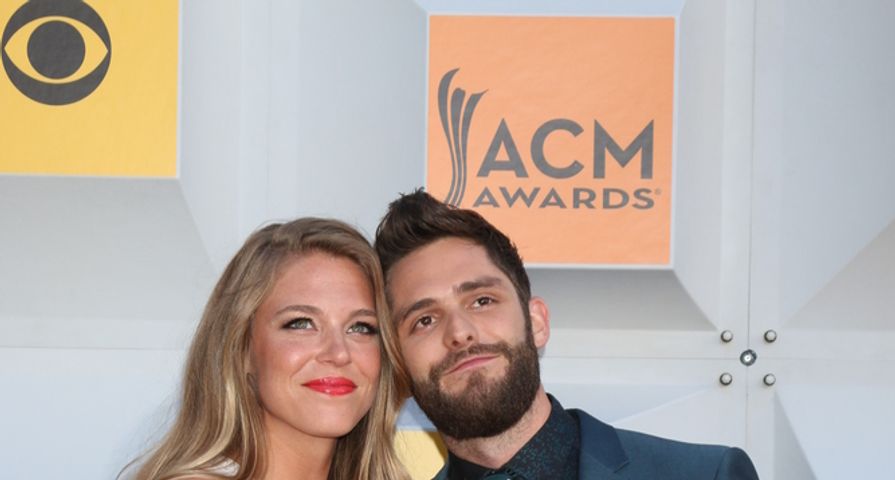 Thomas Rhett and his wife, Lauren Akins have easily become one of the cutest couple in country music! These high school sweethearts have known each other since they were in middle school and spent their childhood growing up together. Now married for almost four years, these two have been winning over country fans with their love story. Not only that, but Thomas Rhett has been climbing the country music charts with a number of hit singles like “Die a Happy Man,” “It Goes Like This,” and “T-Shirt.” He’s only getting bigger and showing no signs of slowing down which makes us really happy! Thomas and Lauren are definitely not shy about showing off their love on the red carpet and on Instagram, but here’s a look at 10 things you probably didn’t know about their relationship:

Thomas Rhett met his future wife, Lauren Gregory, all the way back in the first grade when they both lived in Valdosta, Georgia. They were in the same kindergarten class at Goodpasture Christian in Madison and became close friends while in the sixth grade. They both attended church camp together when they were 13-years-old, forming an even closer friendship, and at 15 they briefly dated for six months. But the relationship was short lived and they went back to being best friends. Thomas and Lauren both went on to have several other relationships. “I don’t think she really noticed me ’til we were 16. When I heard that she had ended her other relationship, I moved in for the kill. We kissed, and that was it,” he said.

Rhett’s co-star in the video for his hit single “Die a Happy Man” is none other than his wife, Lauren! He said it took a lot of convincing to get her to do it, but of course she agreed and they even got to go back to their honeymoon spot in Oahu, Hawaii to film for it! Not only was Lauren in the video, but she was also the one who encouraged him to write it in the first place! In an interview with Billboard, Lauren told the background story: “We were in the car, and Tim McGraw’s ‘Just to See You Smile’ came on. I was like, ‘Babe, people don’t write songs like this anymore. It’s so sweet — it just melts your heart. Write a song like that! About something besides whiskey, beer or taking a girl home in a big truck.” The single ended up being one of the most-played country songs on the radio, won an Academy of Country Music Award and shot his career into full blown stardom.

8. They Both Almost Married Someone Else

Rhett has admitted that country’s favorite couple almost never happened! He said both of them were close to marrying other people at one point in their lives. “I almost married someone else, and she did too.” After they broke up in high school, they both moved on into serious relationships and almost got engaged to other people while in college. She was at UT and he was at Lipscomb. Luckily fate stepped in when Thomas (who was still close with Lauren’s family) was invited to a graduation party in 2011 for Lauren’s sister. At the party, Thomas heard that Lauren had recently broken up with her boyfriend, so he swooped in and told Lauren’s dad he was still in love with her. “Her dad called me and said, ‘If you don’t come over here tonight and tell Lauren how you feel about her, then I’m going to tell her how you feel about her,” Thomas said. So he rushed over to their house and spilled his guts to her on the porch of her parents house. “We stayed up ’til 4 a.m., kissed for the first time since high school,” he told The Tennessean. Thomas and Lauren got married soon after in 2012 when they were only 22-years-old.

In an interview with Taste of Country, Rhett said, “The rules and precedents I’ve set for myself out on the road really are the biggest things that kind of hold our marriage together. No girls on the bus, no girls touch me during meet and greet and all that kind of stuff.” He is also really strict about making his music videos and having to be physical with other women. He even went as far as to use a body double in the video for his single “It Goes Like This.” He also said, “As strict as rules as they are, those kind of things have to be enforced for me to keep my guard up and for her to trust that what (I say is) going on on the road is really what’s going on on the road.” Before Rhett even started getting big, he was very open with the record label and his video producer about the fact that he didn’t want to be “all over some girl in a music video. Even if they are the nicest people in the world, it’s just not really what I do.” He definitely wins the best husband award!

6. She Keeps Him Humble

Thomas Rhett grew up in a broken home. When Thomas was only 9-years-old his father, fellow country singer Rhett Akins was on the road a lot touring for his music career and it put a lot of stress on his parents marriage, leading to their divorce. Thomas has learned a lot from his parents mistakes, so Lauren travels with him as much as she can. “I’ve even come home a lot of the time and talked about what I did on the road and what songs I’m gonna cut and then I realized I haven’t even asked my wife how her day was. So I think this business can be very consuming for some people. But thank goodness that my wife is there to call me out every single time, so my head shrinks a little bit,” he said.

Thomas and Lauren have known each other since middle school, and for a long time they were really close friends, so it’s no surprise these two have their fair share of fights, just like any other relationship. Rhett refers to how some celebrity couples try to put out a facade that isn’t always true, but with Thomas and Lauren they are completely open with the fact that they aren’t perfect: “It’s so crazy looking at it from the outside in thinking that everything is all roses and peachy. If you hang out with me and Lauren, you know our relationship. You know that we fight like cats and dogs, but you know that we’ve fought like cats and dogs since we were like 10 years old,” he told Taste of Country.

Just like every other aspect of these two, the proposal was incredibly romantic! He invited her to dinner at her favorite Italian restaurant in Nashville, Giovanni’s. He got a little help from his mother to stash some flowers, candles and wine in a private room at the back of the restaurant. “There was a [wine] bottle, and with a silver Sharpie, I wrote ‘marry me?’ on the bottle, and she wrote, ‘Well, duh, yes’ on the bottle,” he said. “Somebody cued ‘The Way You Look Tonight’ by Frank Sinatra, and we danced in this little cigar room. It was pretty awesome.” One of the biggest supporters of this relationship was Thomas’ father, Rhett Akins who said a lot of people were hesitant about them getting married at such a young age. “Everybody told him no, this is not what he should do– except Luke [Bryan]. He called Luke three or four times, and Luke was like, ‘Buddy, if you’re in love and you want to get married, then do it.'”

3. He Has Always Loved Her

Thomas openly admits that he’s been head over heels in love with her every since he met her back when they were just kids. It’s safe to say it was love at first sight for Thomas, but Lauren on the other hand took a little longer and he definitely had to win her over. “She was just like the All-American, friendliest, nicest. She was tall, blond, beautiful, pretty much the total package for any dude from the sixth grade all the way through high school. I’m pretty sure every guy had a crush on her,” he said. As previously mentioned, Thomas managed to date her for a little while in high school sophomore year. Their first kiss took place on a trampoline, but it must have not gone so well because it wasn’t long before Lauren decided her and Thomas were better off as friends. “Mitch Barnes invited her to junior/senior banquet. And that was the turning point. I was crushed,” he said.

2. Valentine’s Day is Their Favorite Holiday

Well, Valentine’s Day is Lauren’s favorite holiday and Thomas goes along with the fun so that he can spend time with her. In an interview with The Tennessean, she said she’s the one who works hard to make it a special day for them both. “Regardless of where we are in the world, Valentine’s Day for us is chocolates, heartfelt letters in a Valentine’s card, a good movie, flowers, and time alone with just us two. I always somehow decorate where we are and make it a big pink, red and heart party. Thankfully, Thomas Rhett goes along with it for me and it’s a sweet memory that we have together.”

He said she inspires him not only musically, but to be a better person which is the sweetest thing ever! When asked if he credits his success to her he said: “Oh, every day when I talk to her at 11 o’clock in the morning on a Sunday when we’re on the road and I’ve got a headache ’cause I drank too many beers last night and she just left church. It’s just one of those things where she’s constantly making me feel like I need to up my game, just as far as being a man in the marriage and stuff.” He then added, “She is the best. She really is a huge blessing in my life. Shes the reason for so many things good in my life. So, very, very thankful for her.”