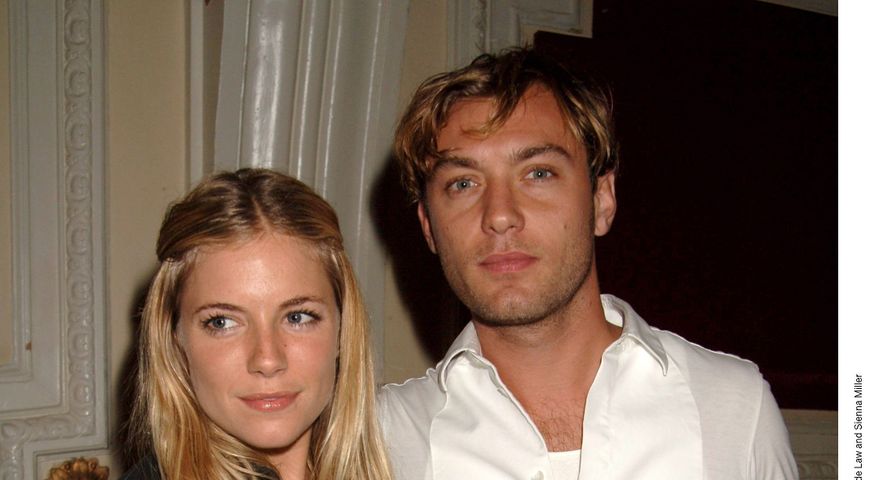 Jude Law and Sienna Miller had one of the most dramatic relationships in Hollywood when they were together. There was cheating and they were constantly breaking up and making up. We’re glad that it’s finally over between these two, but you never know – they could end up getting back together again at some point in the future. They have done it before! Because Jude and Sienna had such a drama-filled relationship, we have 10 things you didn’t know about the former couple:

According to the director of the 2004 movie Alfie, Sienna and Jude met in his living room. “They met in my living room,” Charles Shyer said. “We drank some wine. Did some screen tests. Then drank some more wine.” Sienna played one of his on-screen love interests in the film and had a lot of chemistry. So much so that they took their on-screen romance off-screen in February 2004.

After dating for less than a year, The Talented Mr. Ripley actor proposed to his actress girlfriend on Christmas 2004 with a $35,000 engagement ring, which featured a gold band and nine diamonds set in a platinum setting. Miller was quite excited at the prospect of marrying her former co-star. “I want a big church wedding,” she told People. “We haven’t set a date yet, but I’m ecstatic. It’s always been my dream to marry in white.”

8. His Affair with the Nanny

In July 2005, Daisy Wright, Law’s former nanny, sold a detailed account of her affair with the actor to Britain’s Sunday Mirror. Making matters worse, the I Heart Huckabees actor publicly apologized to his fiancé for his betrayal. “I want to publicly apologize to Sienna and our respective families for the pain I’ve caused. There is no defense for my actions, which I deeply regret, and I ask that you respect our privacy at this very difficult time,” he said in a statement. The affair with the nanny resulted in a breakup for the British couple.

7. Her Affair with Daniel Craig

After Law’s affair with his children’s nanny, he and the Factory Girl star tried to work things out; however, it turned out to be a lot harder than either of them anticipated. During this period, Sienna had an affair with Layer Cake co-star, Daniel Craig, who also happened to be friends with Law. The Aviator actor confirmed this during the News Corporation phone-hacking trial. He testified that he had called Craig to confront him about the affair and demand that he come clean to his girlfriend at the time, Satsuki Mitchel.

After the Sherlock Holmes actor was caught cheating on The Girl star with his children’s nanny, the couple’s relationship became incredibly rocky. They were breaking up and making up regularly. Eventually, in November 2006, the couple called it quits for good. A source told People that the breakup was “a mutual decision” and that they had “come to the end of the road.”

After being split up for a few years, Sienna and Jude got back together in November 2009 while they were both starring in separate Broadway plays. They were spotting snuggling at The Box nightclub in New York and they even spent Thanksgiving together. They took their relationship public when they took a Christmas trip with his three children to Barbados.

While things seemed to be going well for Law and Miller in 2010, his ex wife, Sadie Frost, wasn’t completely on board. After Miller reportedly took one of Law and Frost’s kids out for a haircut, the mother of three was pretty upset and took to Twitter to call the actress out. “I think ya should get ya own child and then cut their hair!” she tweeted. When Christmas 2010 rolled around, Frost told The Telegraph that Law would be spending time with her and their three kids on Christmas day and that Miller wouldn’t be there cause she “has her own family.” Ouch.

In February 2011, a rep for the Oscar-nominated actor confirmed that he and the Casanova actress had broken for good. A friend of theirs told People that it was a mutual and amicable decision and that they would continue to be friends, but the relationship had run its course. Another source told The Daily Mail that the strife between his ex wife Sadie Frost and Miller had caused problems for the couple and that there was no chance that Law and Miller would reconcile.

Miller and Law were both victims in the phone tapping scandal. Both of them had their phones tapped by the News of the World while someone in Law’s family was also selling stories about the actor to the tabloids. During the phone tapping trial in 2014, a journalist testified that, when Law had found out that the News of the World had found out that Miller and Daniel Craig were having an affair, he gave information in exchange for them making it look like their affair predated his affair with his nanny.

In an interview with Esquire in 2014, the Layer Cake actress opened about her 2009 reconciliation with Law and how it gave them a better ending than they got in 2006. “When something ends in a way like that, it’s important if you can, in a way, go back and revisit it and either shut that door or create a new room. So it was a very healthy, cathartic experience,” she said. “And I think it paved the way for both of us to have great futures with no animosity or drama. Such a huge relief, to heal that. And I’m great friends with him and with his children. I love them, madly. Just huge love and respect for all of them.”