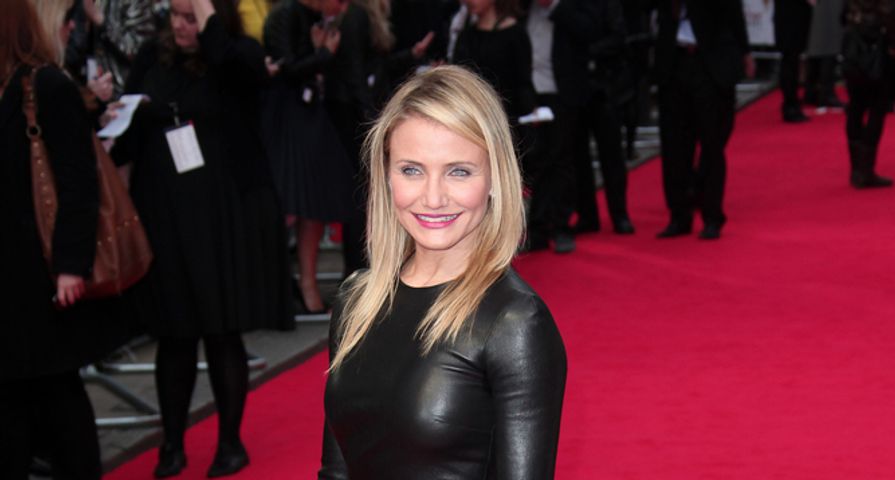 Cameron Diaz is one of the best known actresses in Hollywood. She’s managed to build up a successful career within the film industry after starting out as a model, and now she’s branching off in a new direction and has become a best-selling author. She’s been in the limelight for quite some time, since the early ’90s when she landed her breakout role at the age of 21 alongside Jim Carrey in The Mask. We’ve seen Diaz grow up a lot since then as she’s gone through various stages of her life, and now in her forties she seems happier than ever! She’s become a natural health guru, found peace with herself and happiness with her new husband, Benji Madden. Here’s a look at 10 things you might know have known about this beautiful actress:

Cameron Diaz was born in San Diego on August 30, 1972. Her mother Billie was an import-export agent and her father Emilio Diaz was a field gauger for an oil company. Her father is from a Cuban family so Diaz has strong Latin roots, but they are usually overlooked because of her blonde hair and blue eyes. She grew up in Long Beach and attended Long Beach Polytechnic High School. Diaz was a member of the schools “Polyettes” dance-drill team which meant that she performed half-time at football games. Surprisingly, Diaz went to this school at the same time as Snoop Dogg! The rapper has said, “She ran with my homegirls, all my little cheerleading homegirls…she was fly and she was hip.” Back in 2011 on Lopez Tonight, Diaz reflected on what Snoop was like in high school and said, “He was a year older than me and I remember him there. There was a lot of kids at our school. There was like 3,500 kids, but I remember him. He was very tall and skinny. He wore lots of ponytails and I’m pretty sure I bought weed from him.” 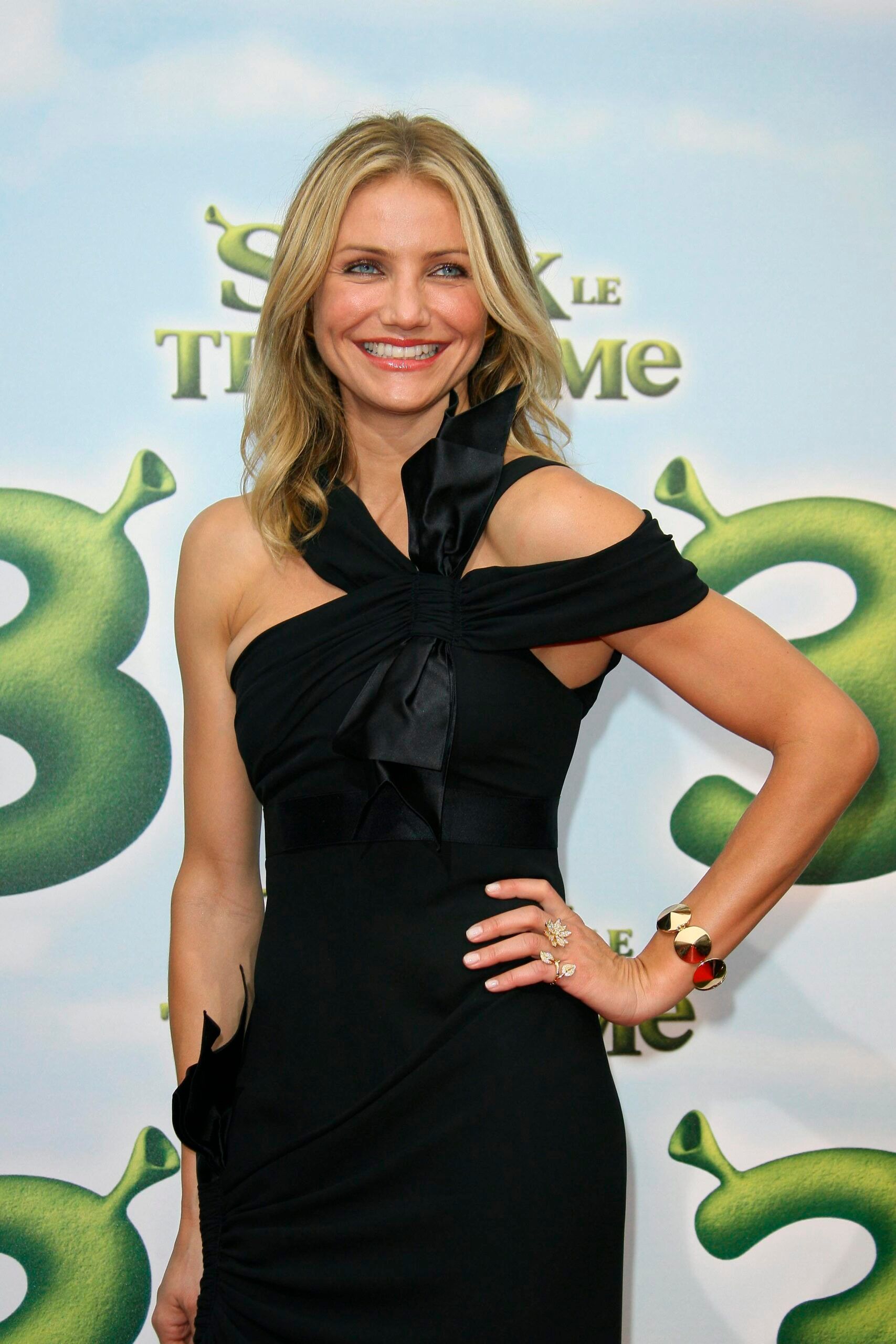 9. Started Out as a Model

She did some modeling for Elite Model Management and even appeared in a few commercials for Nivea, L.A. Gear and Coca-Cola. Diaz has been appearing in front of the camera for a long time. When she was only 17-years-old she graced the cover of Seventeen magazine and has appeared in campaigns for companies like Levi and Calvin Klein. She left home at 16 to pursue a career in modelling and moved around a lot to various locations like Japan, Australia, Mexico, Morocco and even Paris. She made it big after she was discovered at a party in Hollywood by a photographer. Within a week he helped her land her contract with Elite Modelling. 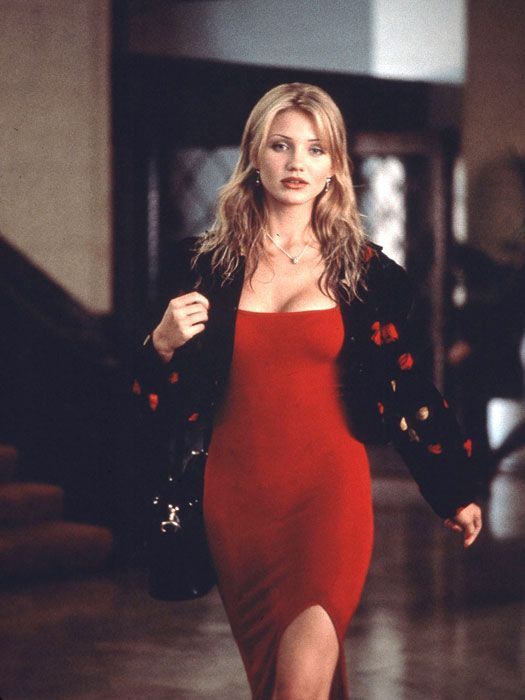 Cameron Diaz landed an audition for the popular feature film, The Mask, even though she had no previous acting experience. She must have done a good job because after 12 callbacks she landed the part! It is extremely rare that an actress or actor lands a role in a major project with no acting experience, but once she got the role she started taking acting lessons and built upon them while working on the film. This was definitely her breakout role and it was a good one to start out with because it was extremely successful. The Mask went on to become one of the top grossing films in 1994 and is considered a cult classic today. At the time she was only 21-years-old and her role in the film helped to push her career forward, and it hasn’t stopped since! 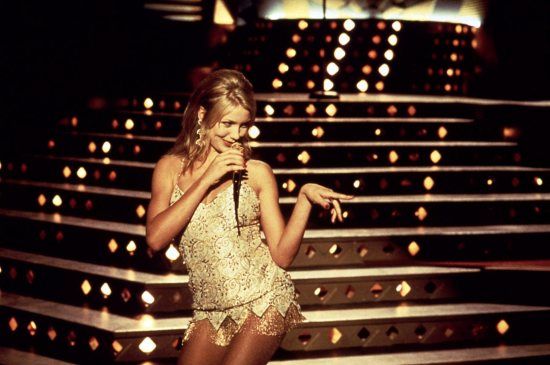 Many people don’t know this because she doesn’t speak about it often, but Cameron Diaz has attention deficit disorder (ADD) which makes her unable to focus on one task for a prolonged period of time. In January 2011, she told OnTheRedCarpet.com, “I have no interest in directing movies or producing movies. I like my role in making films. It’s the perfect amount of involvement for me. I have ADD. I would never be able to spend two years making a movie or even one year. I would just, I’d be someplace else within a few short moments.” 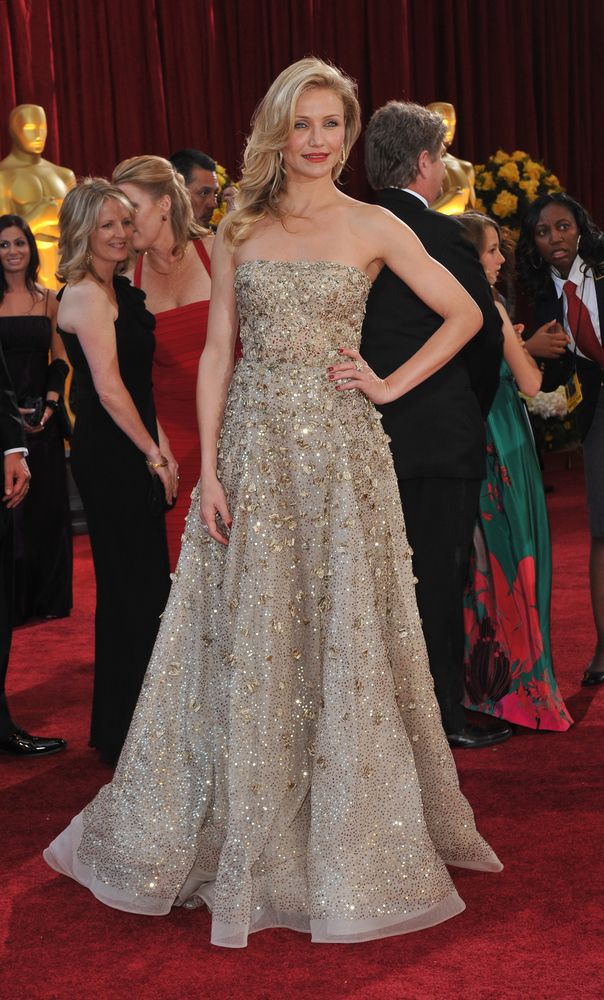 She reportedly loves extreme sports which unfortunately comes at a price. Growing up in California, it’s no surprise that she turned to surfing as an athletic past time, but unfortunately it’s caused a few injuries. She’s broken her nose four times in total! The most recent time was during a surfing accident in Hawaii in 2003 on her birthday. She was surfing with her sister and some friends when she wiped out and someone’s board (from outside her group) hit her in the face. Afterwards she told the Associated Press, “I’m fine. But I’m totally bummed out because I can’t go surfing anymore.” She later had to undergo corrective surgery for medical reasons because it had been broken so many times. 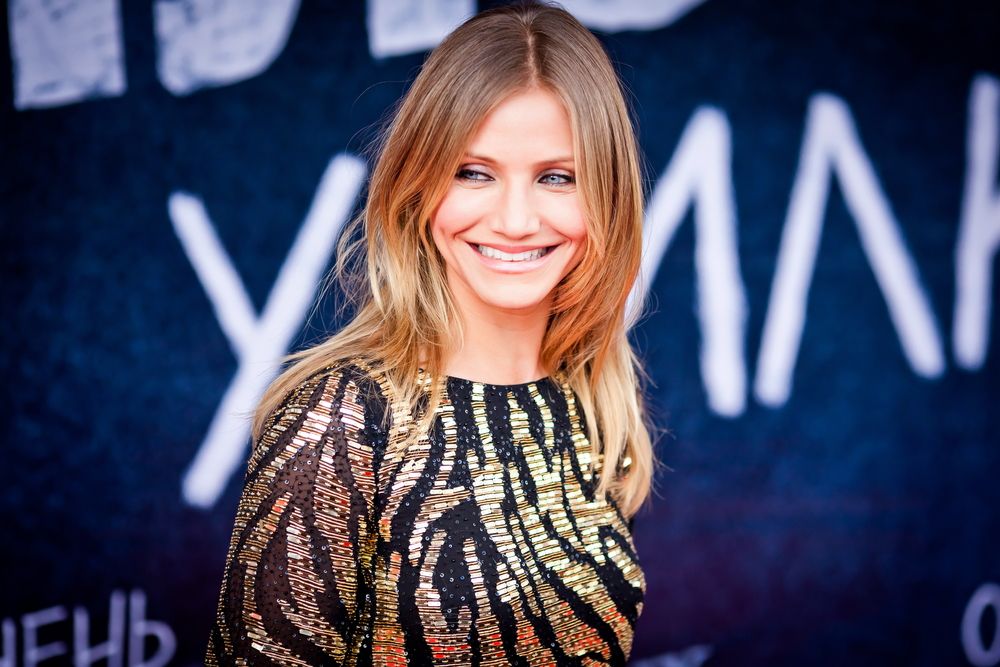 She’s a germaphobe. In a 1997 interview with Time magazine she said she scrubs her house from ceiling to floor, washes her hands many times a day and even opens doors with her elbows. We’re pretty confident that she has one of the cleanest homes in Hollywood! She told the Daily Express that doing chores helps clear her mind and that cleaning her house is “life changing.” That’s one way to look at it! “It’s so crazy but I just find that cleaning out my house changes my life. You come home, clean it out and all of a sudden you’re free from this burden that’s been sitting in the back of your consciousness,” she said. However, one thing Diaz isn’t so keen and clean about is her body odor. Diaz doesn’t believe in antiperspirant or deodorant because, ironically, she thinks it’s gross! “I don’t believe in antiperspirant. It’s really bad for you. I haven’t used it in almost 20 years. You’re stinky because you use antiperspirant. It keeps all the stink in,” she said. 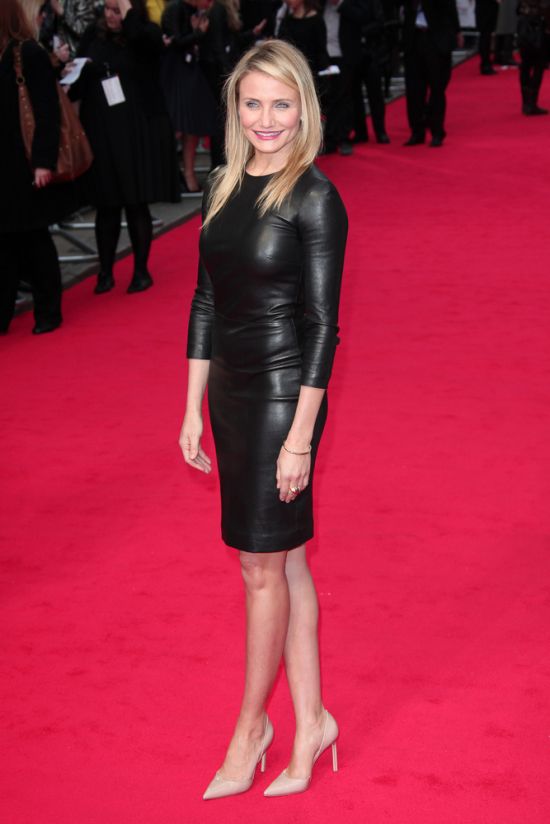 It’s no secret that Cameron Diaz has one of the most successful acting careers. She’s been involved in a number of high grossing films like The Mask, My Best Friend’s Wedding, Shrek, There’s Something About Mary, Bad Teacher and Vanilla Sky — just to name a few. Back in the ’90s she once said in an interview on Inside the Actors Studio that she wishes movies were filmed from start to finish because she never reads the scripts so sometimes she doesn’t understand them! For an actress who doesn’t read the script she does a pretty good job at playing her roles! In 2003 she became the third actress to have earned $20 million for a single role which was in the 2002 film, Charlie’s Angels: Full Throttle. In 2007, Forbes wrote that for each dollar she got paid, her movies averaged a $9 gross income. She was honored with a star on the Hollywood Walk of fame in 2009 and in 2013 she was named as the highest paid actress over the age of 40 in Hollywood! 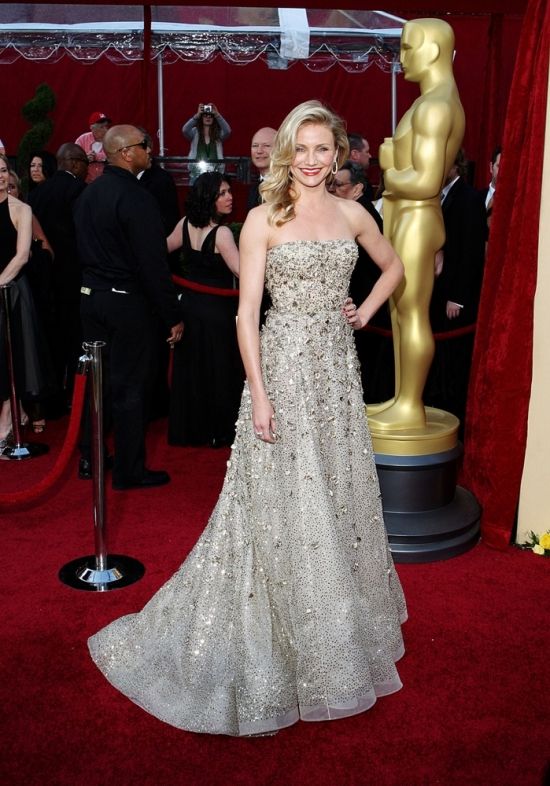 Although Cameron Diaz had spent the majority of her life stating that she didn’t believe in marriage and never seemed to be interested in being tied down to one particular man, she married Benji Madden after only 8-months of dating. The two eloped in 2015 during an intimate ceremony at their home in Los Angeles after an only 2-week long engagement. They hosted their rehearsal dinner at their Beverly Hills home. Her bridesmaids were her sister Chimene, Nicole Richie, Drew Barrymore and her assistant Jesse Lutz and the ring bearer was Benji’s nephew, Sparrow. There was a beautiful indoor ceremony with a reception afterwards outside under a tent. The wedding was small with only 90 guests. They invited friends and family like Drew Barrymore, Gwyneth Paltrow, Toni Collette, Reese Witherspoon, Joel Madden and Nicole Richie. Not only is she a successful actress and model, but she’s also penned two books! She co-wrote the health book “The Body Book: Feed, Move, Understand and Love Your Amazing Body” with Sandra Bark. The book landed on The New York Times best seller list in 2014 and in 2016 she released another book called “The Longevity Book: The Science of Aging, the Biology of Strength, and the Privilege of Time.” These books tackle all kinds of health and positive aging advice which we are more than willing to take from her cause she looks amazing at the age of 43! Her first book covered three main topics: nutrition, fitness and mind/body awareness by looking at various facts like vitamins, minerals, muscle mass and bone strength while the second book takes a very scientific approach to health. Cameron Diaz has become extremely informed about how our bodies work and why they change as we age. She’s all about aging gracefully and naturally and is a strong advocate for the natural things we can do for our body in order to age better. One thing she feels very strongly against when it comes to aging is the idea of Botox. “I’ve tried [Botox] before, where it was like a little tiny touch of something,” she told ET Online. “It changed my face in such a weird way that I was like, ‘No, I don’t want to be like that’ – I’d rather see my face aging than a face that doesn’t belong to me at all.”

It’s pretty clear from her two books that Cameron Diaz has become a bit of an emotional and physical health nut — which is a good thing! She’s aged gracefully without the help of cosmetic surgery and has learned to simply own her body. Something that has helped her the most in the past few years is learning to practice transcendental meditation. She said at first it was extremely difficult to meditate and she would get really frustrated, but a close friend, Jessica Seinfeld, wife of Jerry Seinfeld, introduced her to TM and advised her to give it one more try. “To have that tool now and to be able to go inside to the deepest part of myself and to access that and to recharge my battery internally, within myself, I feel so bada–. I really do. I think it’s so awesome. I feel so empowered that I actually possess that,” she said. Diaz said she even taught Benji and her own family how to meditate! 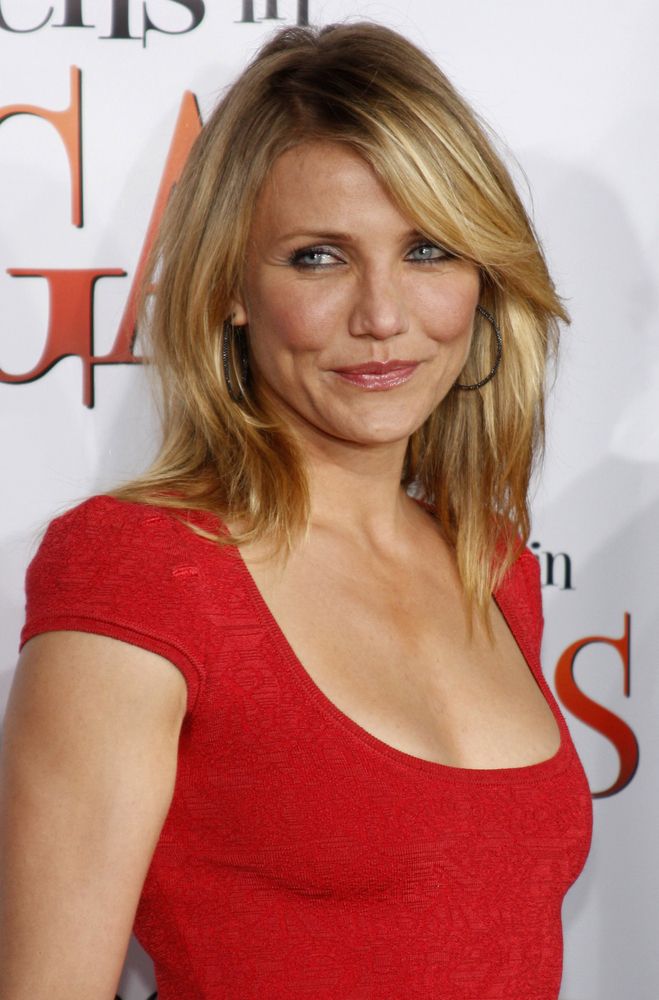