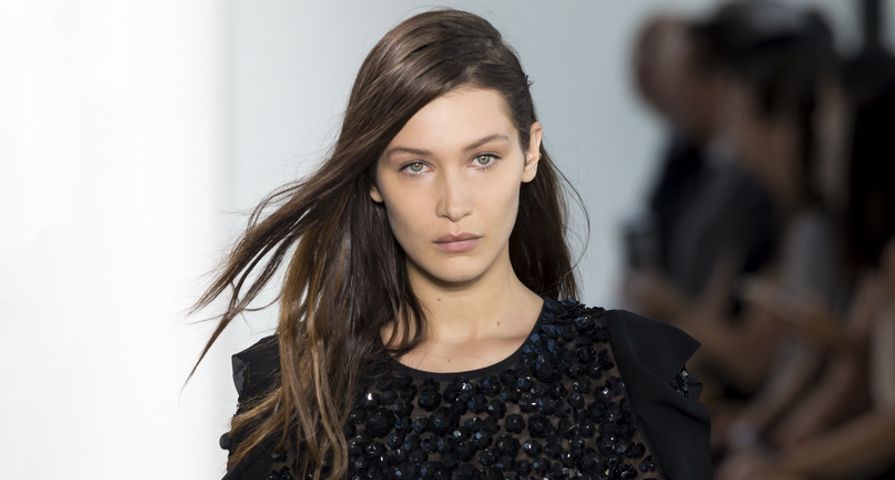 Bella Hadid has been quickly climbing the ladder of fame alongside her older sister, Gigi Hadid. The American model and social media guru began her career as a professional model only three years ago, and she’s accomplished so much since then! She was named “Model of the Year” by GQ and in June 2016 she was ranked as one of the top 50 models by Models.com. As of now, she’s graced numerous covers of huge publications like Elle, Allure, Harper’s Bazaar, W magazine, Seventeen Magazine, British GQ, Flare, and Glamour, walked the runway for big name fashion designers, has been the face of numerous campaigns and was named the ambassador for Dior Makeup. This girl is on a roll! It’s hard to believe she’s only 20-year-old, soon to be 21 and she’s already accomplished so much while remaining completely grounded. Here’s a look at 10 things you probably didn’t know about this fashionista!

Born on October 9, 1996, Bella’s full name is Isabella Khair Hadid. Destined to be a star, Bella comes from a family of Palestinian and Dutch descent. Her father is famous real estate developer Mohamed Hadid while her mother is a former ’80s model named Yolanda Hadid who also starred on The Real Housewives of Beverly Hills from 2012 to 2016. She descends from Daher Al Omer, Prince of Nazareth and the Sheikh of Galilee on her father’s side. She has two siblings who are both models as well, Gigi Hadid and Anwar Hadid, as well as two older half-sisters, Marielle and Alana. While Bella recognizes that she definitely came from a privileged background, she’s adamant that she was raised with the same work ethic as her parents. Her father is a multi-millionaire while her mother is famous in her own right and was previously married to 16-time Grammy Award winner, David Foster. When she was little, her mother and David used to throw parties with all kinds of famous singers in attendance. “I was seven or eight, I was so unaware and oblivious to famous people, I don’t think I ever knew who they were. I would just say, ‘Hey, Whitney.’ She was just my stepdad’s friend,” Bella said.

Bella signed to IMG Models in August 2014. She had done a bit of modeling prior to signing with IMG, but it wasn’t until 2015 that her career really started taking off on an international level. It also helped that her sister Gigi was reaching super model status! In an interview with Teen Vogue, Bella revealed that, unlike her older sister, she never grew up wanting to be a model. “There wasn’t really one time in my life where I was like, I want to be a model! It was more Gigi’s thing.” She was interested in photography, which translated easily to modeling. “I do like being in front of the camera more and more. Having experience behind it has taught me about lighting and angles, how to move, and what looks good and what doesn’t,” she said. Despite this career not being her number one choice, she’s pretty good at it. She’s well on her way to becoming a supermodel and has walked in some of the biggest shows for top designers like Chanel, Givenchy, Miu Miu and Fendi. She’s also done campaigns for Calvin Klein and Marc Jacobs, and has become one of the ambassadors for Dior Beauty.

A quick scroll through Bella’s social media will show that she’s got some celebrity connections! She’s incredibly close with Kendall Jenner and her younger sister, Kylie Jenner. These ladies aren’t just close because they all work in the same industry and run in the same circles — they’ve got a few more family-related things in common. David Foster was Bella’s step-father for quite some time because he was previously married to her mother Yolanda Hadid. David Foster was also Kendall and Kylie Jenner’s half-brothers’ former stepdad. Talk about running in a small circle! So Bella and Gigi had the same stepdad as Caitlyn Jenner’s sons’ Brody and Brandon Jenner from her second marriage and Caitlyn is also Kendall and Kylie’s dad. It’s confusing, but there’s definitely an inner circle connection going on there!

Instead of growing up dreaming of runways, catwalks and high fashion, Bella was working towards competing in the Olympics! Up until 2014 she was training to compete in the 2016 Olympics in Rio de Janeiro. Bella grew up riding horses “before she could walk” and was actually quite good at it. She began riding horses when she was 3-years-old and eventually became a nationally ranked equestrian who competed in the categories of jumping, eventing and dressage. Bella credits her mother, Yolanda, for inspiring her to ride. “You know how every model is like, ‘I do yoga’? Well, I find horses have the same effect. You have to put your ego aside and concentrate on making the horse do the things you want it to do, and move in the way you want it to move,” she said. Unfortunately she had to stop training because she was diagnosed with Lyme disease. In an interview with Teen Vogue she said riding horses taught her a lot of life lessons. “It taught me a lot about responsibility. You’re up at 5:30 a.m. caring for and riding a huge animal. I would be at horse shows by myself for weeks, and I had to make sure I was on my game at all times.”

In October 2015, Bella’s mother, Yolanda Hadid revealed in a blog post that Bella, like her mother and brother Anwar, was suffering from Lyme Disease. “She is resilient and focused on a new direction. She’s made a name for herself in the modeling industry while she struggles with symptoms of chronic Lyme everyday.” Lyme Disease is a bacterial illness that can affect the skin, joints, heart and nervous system. “People are really mean about it. They always say that I don’t have what I have–but it’s taken a toll on my life since I was 15. I’ll occasionally get comments now like, ‘How do you have this disease if you’re working every day?’ But I didn’t want it to hold me back anymore. I’m still 19; I still have a life and things to do,” she said. “It starts with brain fog; for a while I couldn’t put sentences together. I’m really tired a lot. A few weeks ago I had a big campaign shoot that I had to reschedule. It’s hard, but I push through, because at the end of the day, if you’re not working, somebody else is.”

Bella began dating the Canadian R&B singer the Weeknd, who’s real name is Abel Tesfaye, in April 2015. The couple met because “The Hills” singer was interested in booking Hadid for a professional project. “I actually asked her to be on the artwork for Beauty Behind the Madness. My motive was literally to work with her,” said Tasfaye. To his dismay, she declined, but he insisted that he wanted to meet her in person! Bella and Abel made their first red carpet debut at the Grammy’s in 2016. During their relationship, they were extremely private about their relationship and were rarely seen in the public together, but that’s also because they both live extremely busy lives. The couple broke up in November 2016 because their schedules were too conflicting.

4. Arrested for a DUI

She might seem like she’s picture perfect, but Bella has some skeletons in her closet just like the rest of us. It’s hard to remember sometimes that she’s just a teenager with a lot of responsibility. When she was still living under her mother’s roof in California, Bella was arrested for a DUI. The incident took place in July 2014 when she was only 17-years-old and was talked about on The Real Housewives of Beverly Hills while her mother was filming. She was pulled over around 4 a.m. on the Pacific Coast Highway in Malibu, California, after she allegedly failed to stop at a stop sign and almost got into an accident with one of the Los Angeles County Sheriff’s patrol cars. She reportedly blew .14 which is double the legal limit. To top it all off, she was driving on a suspended license at the time. It seems that Bella’s rebellious streak is a thing of the past because she hasn’t had any other run-ins with the law since.

Before she started walking down catwalks and high fashion runways, Bella walked the halls of Parsons The New School for Design where she studied photography as a college student. She has since dropped out because her modeling career has taken off, but while she was still a student, Hadid gave an interview for LuckShops.com and said: “I’m studying photography for my major. It’s been really nice because I’ve been shooting photography for as long as I can remember, and I know that some photographers really appreciate when we can talk about it, because I know cameras and I know about lenses and movement and stuff like that, because I shoot other people, and they’ll fix lighting and I love lighting. So it’s nice to be in front of the camera, which I’m still getting used to, but it’s cool to know about everything on the other side, too,” she said.

Bella has been rocking her signature dark hair for quite some time now so many people might be surprised to learn that she’s actually naturally blonde! She had been straying from her blonde roots since she was 14 because, according to her, she was a bit of a “punk kid,” but it definitely helped to distinguish her from her sister when she got into the modeling biz. “I just have a darker personality. And my sister being blonde and me being brunette, it’s a good separation. I put a blonde wig on and think it would be fun to go back, but I’m happy with my hair. Blondes are so angelic. My sister can get away with anything,” she said. Despite trying to stand out, Hadid is often referred to as a look-alike for Jennifer Lawrence and, according to Bella, she is compared to her multiple times a day. She finally met her supposed doppelganger at the Met Gala and said, “I don’t even know if she knows that. I swear we made eye contact. I had to shake her hand while we walked in, and I was like, ‘This is so weird.’ I don’t know if she did a double take or whatever, but it happened.”

Up until recently, Bella was working a part-time job like the rest of us. Before she made the move to New York City she was working at an organic smoothie bar in Malibu called Sunlife Organics. “I started working when I was about 14 at a juice place, making juices, acai bowls. I cleaned dishes–and like 1000 blenders–for hours.” But in under two years, she went from being just an everyday college student to “model of the moment.” In an interview with Glamour she said she still doesn’t consider herself “famous.” “I don’t walk down the street like, ‘I’m famous.’ It’s still weird to me when people ask for pictures. My close friends from high school keep me grounded — they don’t care what I do. I’m still the same person I was, and I try hard not to change,” she said. Unlike other celebrities, Bella tries hard not to filter what she puts out there, especially when it comes to social media. In an interview with Elle, she said, “I like to present the realest ‘me’ possible. If I’m working, I’ll post a photo of me working. But if I’m sitting home on a Saturday night watching TV and eating pizza, I’ll post that, too.”