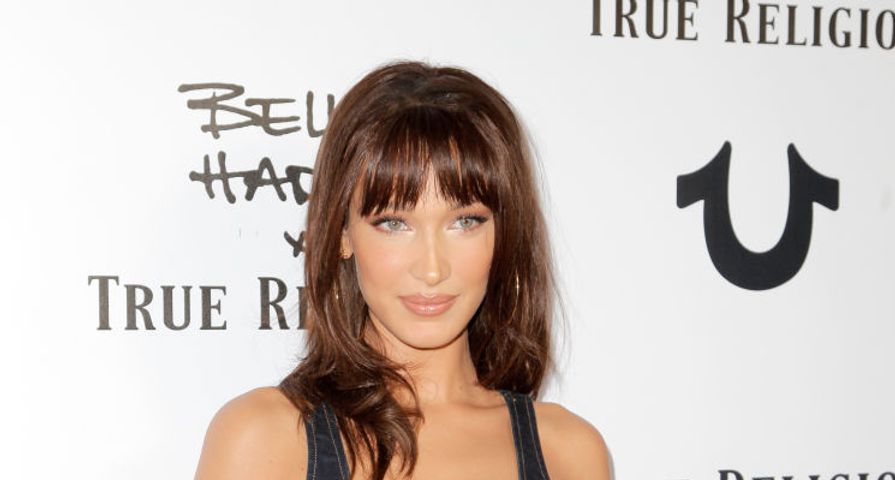 Bella Hadid has been in the spotlight since her preteen years due to the fact that she grew up in a family of fame. As Bella grew older, she became one of the biggest supermodels in the world and is now a household name. From her chiseled cheekbones and perfectly arched brows, there’s no denying that Bella Hadid is a true beauty! She did, however, go through her awkward phases as anyone does growing up. Follow along as we recap Bella Hadid’s face evolution over the years.

In October 2010, Bella Hadid was just 14 years old and attended a red carpet event with her parents in Las Vegas. It’s obvious she’s quite young in this photo and still has many non-altered features and a youthful appearance. Nevertheless, even at 14-years old, it’s very clear that Hadid is absolutely gorgeous and has supermodel potential.

Bella Hadid went under the radar for a few years in her teenage years. She originally emerged on the red carpet simply as the daughter of famous parents, but later in life, she became an entity of her own as a model. Here, she is photographed in March 2014 at the Nickelodeon Kids’ Choice Awards. She’s obviously matured since her 2010 appearance with her parents, but still has soft features and favors a youthful, natural makeup look.

By the time October rolled around in 2014, Bella Hadid’s appearance began to significantly shift. Her former soft, preteen features began to chisel out and she started to favor sharper makeup and hairstyles. For this appearance at a Teen Vogue event, she opted for winged out eyeliner and a sleek bun, which really gave off a supermodel vibe.

In early January 2015, Bella Hadid stepped out looking fresh-faced for a fashion show in Los Angeles. It’s clear by this point that she’s had some of her features altered, most notably a tighter and straighter nose. This appearance also made it clear that Hadid favors the natural look when it comes to makeup, which is something we can truly appreciate about her!

(Photo by Charley Gallay/Getty Images for the DAILY FRONT ROW)

In June 2015, Bella Hadid began to look even more like the version of herself that we recognize now. Her cheekbones became more chisled and her entire facial structure looked much sharper and adult-like. She attended the Tony awards in June 2015, which really marked her year of making it big in the modeling industry. We absolutely love her glitzy dangling earrings and sleek topknot for this red carpet.

In the fall of 2015, Bella Hadid stepped out for a Harper’s Bazaar event at the Plaza hotel looking beautiful as ever. She tied her hair in her go-to topknot and opted for nude, earth tones for her makeup. For this event, she focussed on having dewy, highlighted skin rather than a heavy, model-esque contoured face.

Bella stepped out in March 2016 for the Daily Front Row “Fashion Los Angeles Awards” looking like a full-blown supermodel. From the demure, seductive stare, to the perfect cheekbones and lashes, it’s clear by now that Bella has mastered exactly what she wanted her supermodel look to be. Minimal makeup, sleek hair, long lashes, and cheekbones are all a part of Bella Hadid’s signature style.

While Bella had mastered her signature look by 2016, that doesn’t mean she was limited to that being her only look! In May 2016, just two months later, Bella stepped out with a wispy bang and a rich chocolate hair color, proving she can totally rock more than one look. We absolutely love how this warm brown brings out her green eyes and how easily she can completely change up her look and still look beautiful.

8 Celebrity-Inspired Ways To Wear A Braid

By the end of 2016, Bella Hadid totally changed up her look again. It seems this was her year of experimentation! Rather than the wispy bangs and short hair, she opted for super long hair tied into boxer-style braids, which was a major hair trend at the time. She also seemed to favor a darker makeup look here with thick, black lashes, a berry lip, and heavier contoured cheeks.

The next year, in June 2017, Bella’s appearance seems to have shifted again. Whether it be fillers or more makeup, her look seemed to appear almost doll-like. Her eyebrows are more arched, her cheeks appear higher and sharper and her lips noticeably plumper. She’s also grown out her bangs to a middle part and wrapped her dark chestnut locks into a deconstructed updo.

(Photo by Venturelli/Getty Images for Bvlgari)

The 7 Most Outrageous Celebrity Wigs

In September 2017, Bella Hadid’s modeling career was booming. She was on every major catwalk and is photographed here at New York Fashion Week walking in the Jason Wu show. As a model, it’s important to be able to pull off experimental hair and makeup, which is exactly what Bella is doing here with the bold eyeliner and wet texture of her hair.

In December 2017, Bella stepped out with one of the heaviest makeup looks we’ve seen her wear, which is still quite minimal and clean in comparison to other celebrities. The real drama with this look comes from her eyeshadow, which is a bold bronze smokey eye. The rest of her face is quite bare with a subtle contour, a nude lip color and she pulled her hair back in her signature sleek topknot.

(Photo by Venturelli/Getty Images for Bulgari)

By February 2018, Bella Hadid was an established international supermodel traveling the globe to walk on some of the world’s most elite runways. Here, she is pictured in February at Milan Fashion Week. She’s returned to her dark, almost black hair color and rocks a dramatic winged liner, which could likely be from one of her runway looks.

In June 2018, while her facial structure hasn’t seemed to have changed much, her hair and makeup most certainly have. At the Dior show in Paris, she rocked a new lob hairstyle with a middle part, which is a mature, sophisticated length we love on her! For her makeup, she opted for something unique with a subtle yellow smokey eye that picks up perfectly on the neon suit she has on.

October 2018 showed another major change in Hadid’s appearance. She stepped out with bangs again and a brighter chestnut shade of brunette, which could quite possibly be a wig. She styled her makeup with a bronzed, sunkissed look that featured peach cheeks, a nude lip, and dark lashes.

In 2019, Bella Hadid is a household name and one of the world’s most notable international supermodels. While she’s noticeably had some work done, she’s also been a true beauty ever since she was first in the spotlight at 14 years old! By 2019, Bella has proved that while her signature look is minimal makeup and sleek hair, she can flawlessly transition between runway looks to red carpet events like the powerhouse of a model she is!