10 Things You Didn’t Know About ‘Awkward’ 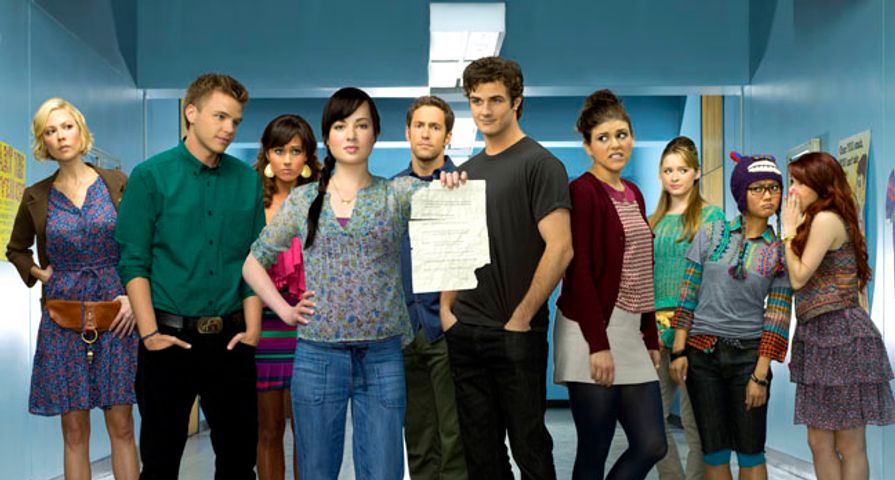 In terms of teen series, MTV’s take on newer shows breathes a breath of fresh air with shows like Faking It and Awkward. While Awkward deals with typical teen issues, it deals with them in a hilarious way and with surprising wit, but also has some surprising darker undertones which make it a lot different than most other shows of the same genre. Awkward also boasts a talented cast of young actors including Ashley Rickards, Beau Mirchoff, Jillian Rose Reed, Greer Grammer, Molly Tarlov and Brett Davern, making it an intriguing and entertaining series even for those who are no longer teens themselves. As perhaps one of the most underrated teen series, take a look at 10 things you probably didn’t know about Awkward.

Lissa is probably one of the most underrated characters on the show, as she deals with some of the biggest issues, goes through major things and yet always plays second fiddle to Molly Tarlov’s Sadie Saxton. Played by Greer Grammer, it is clear the girl has some serious acting chops, and that may be thanks to genetics as she is the daughter of none other than Kelsey Grammer. She has worked very hard for own acting career and is not thriving simply off the fact she is Kelsey’s daughter. She was chosen as Miss Golden Globe 2015 at the 72nd Golden Globe Awards, an honor which goes to the child of a celebrity.

As a teen series, creator Lauren Iungerich wanted to make the setting and characters as realistic as possible and did her own extensive research to make that happen. Iungerich continually went back to her old high school to get a sense of real teenager’s every day lives, dialogue and problems. She also cites the popular show Friday Night Lights as one of her influences, stating, “What Jason Katims did in five seasons was utterly beautiful. The story and who the people truly were came first. That’s what I sort of took away from it; to be so bold as to graduate people, and wrap up story lines or allow them to come back in organic ways and to fall in love with the new characters.”

It is very rare when teenagers actually play teenagers on shows based in high school, and for the most part, the cast of Awkward are pretty believable as teenagers. Surprisingly none of them were teenagers when filming the show, which has become more noticeable in later seasons and a good thing they’re wrapping up senior year.

Awkward has received a good critical reception thanks to its unique take on high school life and high school characters and, along with some of the cast members, has been nominated for several awards. At the 2012 Teen Choice Awards, Beau Mirchoff won the award for TV Breakout Star: Male, while Ashley Rickards was nominated for Summer TV Star: Female, but she did not win. In 2013 Awkward also won the award for Favorite Cable TV Comedy at the People’s Choice Awards.

Fans of shows are often surprised to learn that, while the cast has a great chemistry on-screen, they are also friends off-screen. Different members of the cast often post photos together hanging out and they all say it’s like working with one big family, and also pull pranks on each other. Jillian Rose Reed says she is often on the receiving end of the guys’ pranks, which included a trailer full of balloons. “They filled my trailer with over 70 balloons. I couldn’t even walk in my trailer […] I think they sat in Beau Mirchoff’s trailer for hours and blew them all up by mouth.”

For a long time it was stated that Season 5 would be the show’s last as the kids all graduated high school and went their separate ways to college. After the major success of the show, however, it hasn’t been so clear if it will really be the end, and it seems writers and producers are definitely trying to figure out a way to continue on with the show and characters. In an interview with the Hollywood Reporter in August, showrunners Mike Chessler and Chris Alberghini stated, “I think we dropped a big enough hint that this may not be the final season, so we just want to make sure that gets heard.”

4. Changes In The Show

The control of a show often changes hands in between seasons, and while sometimes fans don’t notice anything different with the show, sometimes the new showrunners make distinctive changes. At the end of season 2, Awkward creator Lauren Iungerich left the series, leaving the network to handpick Chris Alberghini and Mike Chessler as the new showrunners. Since they were major fans of the show and characters, much was left the same with only subtle changes. “I would say the only thing we approach a bit differently is we’re trying to open the world up a little bit. We made a conscious effort to give stories to a lot of the supporting characters, not just Jenna and Matty. We’re doing as much of that as we can, and taking the characters on different journeys that we’ve envisioned for them.”

Aside from being an actress, Ashley Rickards always writes her own screenplays and scripts, and when discussing them revealed she is more like the darker Jenna then the funny, happy Jenna, something her agents knew all too well. “When I was reading for Awkward my agents were calling MTV asking, ‘Is she funny? Does she need a funny coach? Because we can get her one.’ I’m not writing Gaspar Noe’s head-smashing scene in Irreversible or anything; I’m not there yet. But my stuff is completely different from Awkward, although even that show is a bit of a dark comedy.”

Jenna Hamilton might struggle to get into the college of her choice, but the same cannot be said for Ashley Rickards. Rickards graduated high school when she was 15 and is a member of MENSA, the oldest and largest High IQ society in the world in which you get in if your IQ is in the top 2%. However her reason for joining had nothing to do with prestige: “Frankly, the reason I joined MENSA is because I was dating a guy at the time who spoke five languages and could solve a Rubik’s Cube literally with his eyes closed because it’s just an algorithm. Being with a person who was very intimidating, it was my way of saying, ‘You make me feel like an idiot, but maybe this makes me feel like less of one.'”

The longer a show goes on, the harder it is for every actor to appear in every episode because of personal commitments and, of course, taking on other acting projects. Awkward, however, has a very dedicated cast because over the 77 episodes so far, Brett Davern, Jillian Rose Reed, Beau Mirchoff and Ashley Rickards have all appeared in all of the episodes while Molly Tarlov and Nikki Deloach have only missed one episode each.