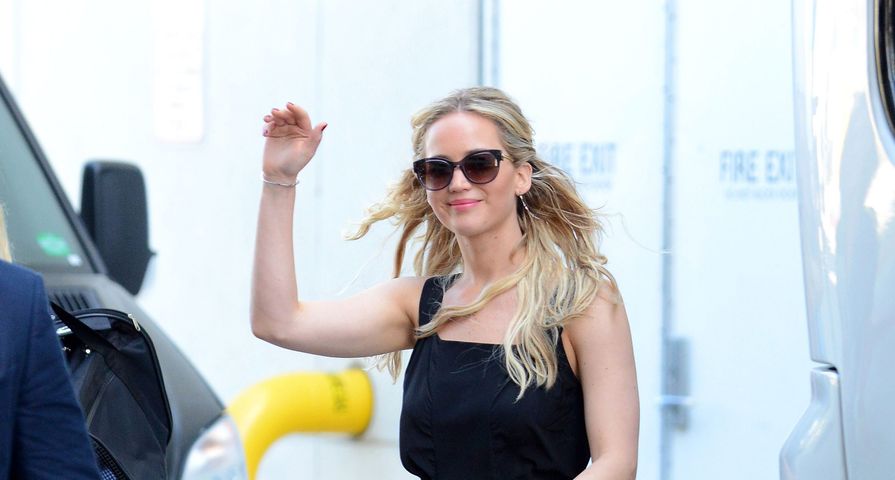 As soon as Jennifer Lawrence made the acquaintance of movie-going audiences, she was fast and furiously a fan favorite. Whether she’s playing the kick-butt Katniss in The Hunger Games or the beautifully blue Mystique in the latest X-Men movies, visiting little kids in the hospital or tumbling up the stairs at the Oscars, everything the actress does is inevitably endearing. There’s just something about Jennifer Lawrence that makes everyone fall in love with her immediately. In fact, there are plenty of somethings. Here are 10 reasons fans love Jennifer Lawrence.

Unless you’ve been living under a Hollywood-sheltered rock for the last few years, you’re aware that Jennifer Lawrence won the hearts of fans around the world when she battled as Katniss Everdeen in The Hunger Games. Based on the popular book series of the same name, Jennifer portrayed the character perfectly with just as much fierceness and strength lined with compassion and intelligence. Despite being perfect for the role, it took Jennifer Lawrence a full three days to accept after being offered the part. Worried about the size of the movie and her role in it as well as the effect on her overall career made her hesitate, but in the end she took the job and embarked on grueling training – including archery, rock and tree climbing, and of course, combat – in order to prepare herself for the challenge. It all paid off in box-office sales (a cool $691+ million for the first film in the series) and international adoration for the lead star.

Fans can’t get enough of Jennifer Lawrence, even if she’s a blue, shape-shifting, villainous mutant. When she joined the X-Men cast for 2011’s First Class, she took on the role of Xavier’s sister-type and Magneto romancer Mystique. Only a handful of women, and that definitely includes Jennifer Lawrence, could pull off the look and still come across as totally appealing. The film’s character struggled with her place in the world, but audiences had no struggle at all accepting her as one of the awesome X-Men cast and couldn’t wait for more of her in the following film, X-Men: Days of Future Past.

Celebrities must surely become somewhat used to the throngs of screaming fans that attend premiers and appearances. Perhaps they even learn to tune it out or keep their focus away from the masses of crowds. Jennifer Lawrence, on the other hand, makes sure to always acknowledge her awaiting fans, even comforting a young admirer at The Hunger Games: Catching Fire London premier who became overwhelmed when Jennifer arrived. The girl began to cry and when Lawrence noticed, she gave the young fan a hug until she was able to calm down.

7. No Shame to Social Anxiety

Jennifer Lawrence isn’t a stranger to anxiety herself. Unashamed to admit her weaknesses and hopefully encouraging others to seek necessary help, Jennifer has been open and honest about the fact that she sought out therapy for the severe social anxiety she was suffering through. She was even experiencing feelings of worthlessness, but the therapy helped her work through the issues and hopefully by being upfront about her personal situation, she can inspire others to be just as active in their self-care.

6. Taking Time For Her Fans

When the fans can’t come to her, Jennifer Lawrence goes to her fans. While jumping back into the role of Mystique for 2016’s X-Men: Apocalypse, the star took time out to visit fans in a local children’s hospital. The hospital shared pictures of a smiling star along with delighted little ones with the caption, “A very special visitor stopped by our Canada hospital today. Jennifer Lawrence is in Montreal filming a new movie and she made time to visit some of our #ShrinersCanada kids and staff. Everyone had a great time!”

Jennifer Lawrence may overwhelm adoring fans, but that doesn’t mean she doesn’t get overwhelmed herself when more established stars are in the vicinity. At the San Diego Comic-Con, Jennifer found herself on the same red-carpet as long-time Hollywood star Jeff Bridges. She did her best to muster her nerve (perhaps channeling the super-brave Katniss?) and made her way over to introduce herself before quickly chickening-out and bailing the other way as fast as she possibly could. In the end, she managed to say hello, but the star-stuck star came across as just that much more adorable.

Part of Jennifer Lawrence’s charm is how normal she sometimes seems and that includes her occasional clumsiness. When she won the Oscar for Best Actress for 2012’s Silver Linings Playbook, she was the second-youngest best actress winner ever and the moment helped to solidify her place amongst Hollywood’s best and brightest. However, on her way up the stairs to accept her speech, she tripped in a now infamous tumble. The very next year, Jennifer Lawrence had another fall at the Academy Awards when she stumbled and went down while getting out of her limousine. Wearing a fitted Christian Dior Couture red peplum gown, she managed to still look gorgeous as she laughed off what could have been epically embarrassing experiences.

Photobombing on the red-carpet has become a popular past-time for some of the hottest Hollywood stars including Benedict Cumberbatch and, of course, Jennifer Lawrence. No one is safe from her photobombing pranks, not Taylor Swift or Elizabeth Banks or even the fashionably-feathered Sarah Jessica Parker. Whether popping into the background with a silly facial expression or merely sneaking into the pic with arms held high, Jennifer Lawrence’s photobombing is among the best that current celebrities have to offer.

How can you not adore a woman who is abundantly talented to the point of winning world-class awards? How about a woman who is totally fierce and strong like a modern-day bow-wielding bada-s Amazon? And what about a woman who is totally, stunningly, and jaw-droppingly sexy? The answer is, you don’t. Of course everyone adores that woman and she’s indeed Jennifer Lawrence. With the perfect combination of skill, strength, and sex-appeal, she’s a heck of a lot of fans number one celebrity (friend) crush for plenty of reasons.

One of the main reasons Jennifer Lawrence is so likeable is that she’s just that, likable. Really, really likable. With an approachable attitude, a silly sense of humor, and a great grasp of who she is as a person, she’s the kind of gal you immediately want to be BFFs with.