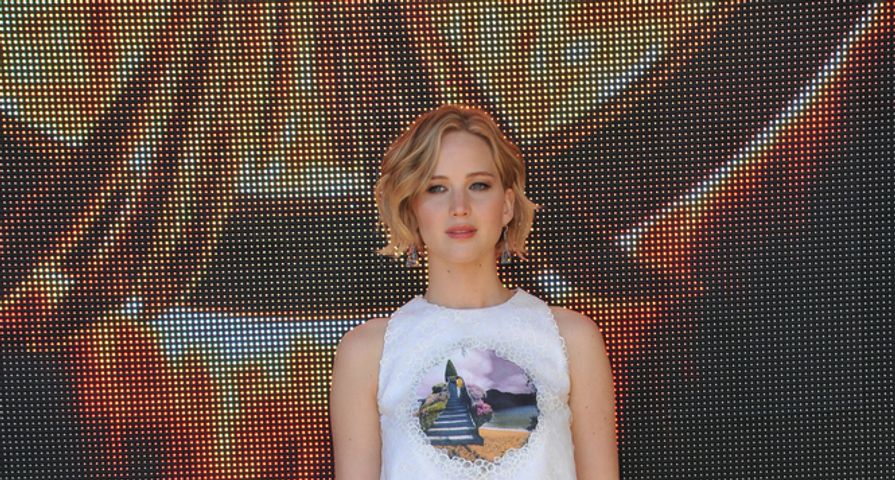 Jennifer Lawrence is an incredible actress. It doesn’t matter what she’s in – she just shines. When it comes to her sense of style, however, the jury is still out. Glamour UK just selected her as their best dressed female celebrity. While we agree that she is well dressed (these days), we’re not sure she is innately stylish like Keira Knightley or Sienna Miller. We think she gets a lot of help from her stylist and, if it weren’t for that, she wouldn’t be particularly fashionable. To help us determine where she sits on the style scale, we’ve organized some of her red carpet moments – check it out!

A young Jennifer Lawrence looked pretty in this blush-colored cocktail dress at Turner Network’s Summer 2008 TCA Press Tour. Our favorite action star was an unknown actress at this point. She was mainly working on television and had only a few of film roles under her belt at that point. It is funny to think that in only a couple of year’s time she would become an international film star with a contract with Christian Dior.

The unknown actress wore this boring one-shouldered, pewter-colored cocktail dress to the premiere of the film “Burning Plain” and accessorized with black heels and a black clutch. It is interesting to see pictures of Jennifer Lawrence’s fashion before she could afford a stylist. She seems to go for rather safe, dull looks and avoids taking any real risks. Without help from a stylist, it doesn’t look as though she is really that stylish.

The budding movie star wore this white gown to the 14th Annual Hollywood Awards Gala. We’re not particularly of this dress. It looks more like a wedding gown than something an actress would wear on the red carpet. Jennifer Lawrence hadn’t yet established herself as someone to watch out for on the red carpet; however, she was starting to get a lot of attention for her amazing acting chops thanks to her performance in “Winter’s Bone.”

Jennifer Lawrence rocked this black Louis Vuitton flamenco style gown with Chopard jewels, a Judith Leiber clutch and Roger Vivier black heels at the 68th Golden Globe Awards. She had received a Best Actress nomination for her performance in “Winter’s Bone.” She also received a nomination for Best Actress from the Academy. Although she didn’t win either award, the accolades definitely helped put her on the map.

The Oscar-nominated actress got our attention at the 17th Annual Screen Actors Guild Awards for all of the wrong reasons. She wore this Pepto-Bismol-pink Oscar de la Renta belted gown with a black Judith Leiber clutch and black Roger Vivier heels. Jennifer Lawrence was nominated for a SAG Award for Best Actress that evening. Fortunately, this disastrous look was one of her last misses on the red carpet.

Jennifer looked stunning in this red Marchesa Fall 2012 dress with a gold Ferragamo box clutch and red Giuseppe Zanotti peep-toe shoes at the Berlin premiere of “The Hunger Games.” She must have received some help from a stylist because she hasn’t looked this good on the red carpet in a while. After her role in this film, Lawrence became an international star. Let’s just hope that she can continue to dress the part!

The Golden Globe-winning actress looked amazing at the 2013 LA Film Critics Awards in Valentino Couture. Everything about this dress is perfect. We love the long sleeves, the high neck, the asymmetrical hemline and the colors. The silver-colored accessories were a great addition. We can see absolutely nothing wrong with this fantastic ensemble. Rumor has it that at this point Jennifer Lawrence was being styled by Rachel Zoe.

Another great dress on Jennifer Lawrence! She rocked this nude embroidered Valentino dress with nude Brian Atwood ‘Wagner’ peep-toe heels at the The Hollywood Reporter Nominees’ Night 2013 Celebrating The 85th Annual Academy Award Nominees. 2013 was a great year for our favorite action star. She won an Academy Award, a Golden Globe Award and a SAG Award for her performance in “Silver Linings Playbook,” and she did it all while looking stylish.

The critically acclaimed actress wore this strapless sequined Christian Dior gown to the 20th Annual Screen Actors Guild Awards. We really like this dress. It isn’t your typical black dress – the multi-colored sequins sparkle and pop in the light. Jennifer Lawrence was up for another SAG Award this year for Best Supporting Actress. She didn’t end up taking the award home, but we are quite certain she landed on every best dressed list for this gorgeous gown.

Jennifer Lawrence looked lovely at the photocall for “The Hunger Games: Mockingjay Part 1” in this white Christian Dior ensemble. The two-piece outfit consisted of an A-line crop top, which featured a landscape print, with an A-line skirt. She accessorized with silver metallic Christian Louboutin pumps. This outfit is definitely more fun and youthful than what she usually sports on the red carpet – we hope to see more of this at future events!