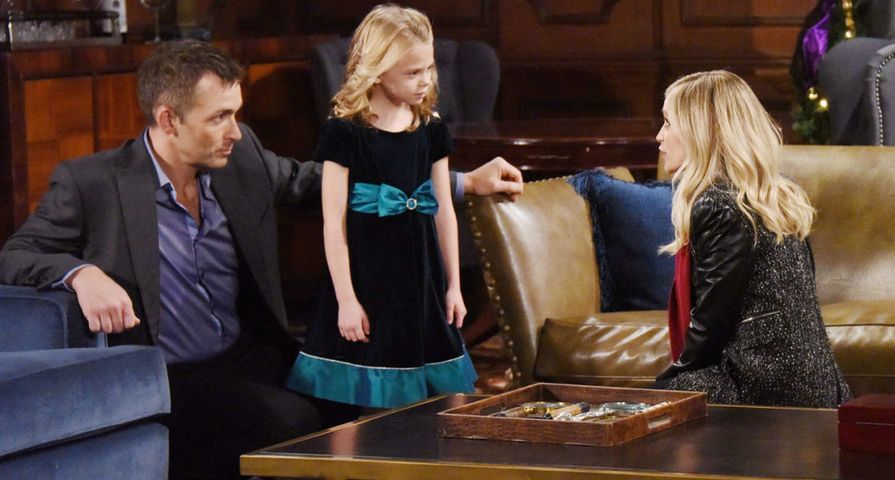 Days of Our Lives (DOOL) Maggie Kirikias seems to have family popping out from all over the place. First, she ended up being Dr. Daniel Jonas’ mom, and then in the summer of 2016, a daughter strolled into Salem — which provided the show with an incredible plot twist. Sadly, Daniel passed away in early 2016 and his heart ended up saving Brady Black’s life. But then Brady began having dreams about a mysterious woman which led him on a wild goose chase to find Summer. Most Days’ fans naturally assumed that Summer was a former love interest of Jonas’ or would become a new love interest for Brady … but neither really occurred. A bond was formed between mother and daughter when it was realized that Summer was both Daniel’s sister and Maggie’s long-lost child.

9. GH’s Olivia Rises From The Dead

General Hospital (GH) has been on fire as of late and Olivia Jerome (played by the talented Tonja Walker) has a lot to do with that. After 25 years of everyone thinking “Liv” was dead, it turned out she was alive. Not only has she been alive, but she was responsible for Morgan Corinthos’ death and has been wreaking havoc in Port Charles for a while now. What a massive and unbelievable plot twist!

Maybe the question should have been, who is Baby Holly’s parents? When Chloe Lane wound up pregnant, all arrows were indicated that the villainous Deimos Kirikias was the father. She desperately wanted to keep the baby away from his evilness and dragged Phillip into the equation when she begged him to pretend to be the baby’s daddy. In a crazy twist of events, the child ended up being Daniel and Nicole’s (despite the fact that Daniel was dead) and Chloe was not related to the baby, but was a surrogate. Just another one of DOOL’s unbelievable plot twists!

When Marco Annicelli strolled into Genoa City impersonating Jack Abbott, he was able to ruin his life, both career-wise and personal, but who knew that he was behind the murders of both Austin Travers and Courtney Sloane? While Mariah, Kevin, Summer, Abby, Courtney, and Noah were shocked to wake up in the Abbott cabin one morning after a Valentine’s drink-fest party to find Austin dead, what would unravel next was a nice mimic of the movie I Know What You Did Last Summer. In the end, Courtney’s life was sacrificed during the storyline and it turned out to be Detective Harding who was in Marco’s back pocket as he was simply offing people in an attempt to hide Annicelli’s illegal activities.

This wouldn’t seem that unbelievable considering how many times Stefano DiMera has died and come back to life, but since the beloved actor who played the character (Joseph Mascolo) passed away in real-life in late 2016, the fact that Stefano was alive in early 2017 did turn out to be a crazy plot twist. Mascolo announced his retirement in late 2015 due to health issues and onscreen Hope ended up shooting DiMera three times. It all seemed to make sense considering the circumstances, but then the storyline that unraveled as the year went by seemed unreal. Hope tried to keep the murder under wraps, but was eventually found out and sent to prison. As it turned out, Stefano baited Hope into shooting him as he was ill and suffering. In the end, the Phoenix rose one last time, turned out to be alive and well (even escaped jail), and Hope was cleared of her charges. The plot twists allowed for an excellent tribute to an incredible DOOL character and the amazing actor that played him.

Lucky for Charlotte Cassadine, she is one sweet and adorable kid. However, when she strolled into Port Charles she created quite the stir. At first it seemed as if Charlotte was brought into the picture to cause some problems between Nathan and Maxie. She was thought to be Nathan’s daughter and then Griffin’s, but as the story progressed it seemed to be more about the Spencers versus the Cassadines. In an unbelievable turn of events, Charlotte ended up being one of Lulu’s frozen embryos, stolen by Helena Cassadine in a desperate attempt to produce another Cassadine heir. With Lulu as the mother and Valentin as the father, Charlotte follows in the footsteps of her cousin Nikolas and the constant struggle he had between good and evil influences throughout his life.

4. Y&R’s Victor Gets The Heart Of An Angel

What are the chances that the heart of a young girl would be the perfect match to an older man? Clearly in the land of soaps, anything is possible! In 2009, Colleen Carlton was kidnapped by Patty Williams and drowned in a lake. She was pronounced brain dead when she reached the hospital, and at that very same moment, luck would have it that the infamous Victor Newman needed a heart. There has been no love lost between Victor and the Abbotts, but Traci (Colleen’s mom) has always been a sweet and caring individual. She gave Victor her daughter’s heart and he was able to recover from his heart issues and continue to ruin the life of her brother Jack. While some thought Victor may change once he had Colleen’s heart, truth is, he went back to his manipulative and controlling ways shortly afterwards.

Paul Hornsby was never one of those good guy characters. He was manipulative, scheming, and partook in many an illegal activities despite being the town’s district attorney. Regardless, he was the last person anyone thought would be the GH Serial Killer that took the hospital by storm last year. After all, did he really have a solid motive to kill all those innocent people? Sadly, Paul Hornsby did not and went from sane individual to mental patient in a matter of moments. The only silver lining to this unbelievable plot twist was that not too many GH characters fell victim to his killing spree.

Good and evil twins are an on-going theme in any soap opera. Evil twins tend to pop out of nowhere and usually look nothing like their soap opera twin. The idea has been overdone, but it does tend to spice up any daytime drama storyline. Y&R takes the cake when it comes to look-a-likes and doppelgangers. How can so many people come out of the wood work to look like so many others in Genoa City? Jack had Marco Annicelli not too long ago, then Sheila Carter had surgery done to look like Phyllis Summers in 2006 and then there was the Katherine Chancellor/Marge Catrooke storyline in the 1980s and 2000s. What are the chances that there would be so many look-a-likes that are identical to certain Genoa City residents without actually being related in any way, shape or form?

This storyline is infamous when it comes to unbelievable plot twists. The Days’ writing team wanted to shake things up in the early 2000s and bring in some new viewers, as well as some that may not have been watching the soap at the time. There was a killer on the loose in Salem, knocking off beloved (and long-time) characters left, right, and center. As DOOL fans watched in horror, plot twist number one revealed it was Marlena Evans!? In the end fans didn’t know whether to feel betrayed or relieved. Turns out these characters were alive and kicking on a new island (Melaswen – New Salem spelled backwards), and Stefano was at the helm. This was totally unbelievable, but then again not that shocking considering DiMera was always at the forefront of any craziness back in his heyday.