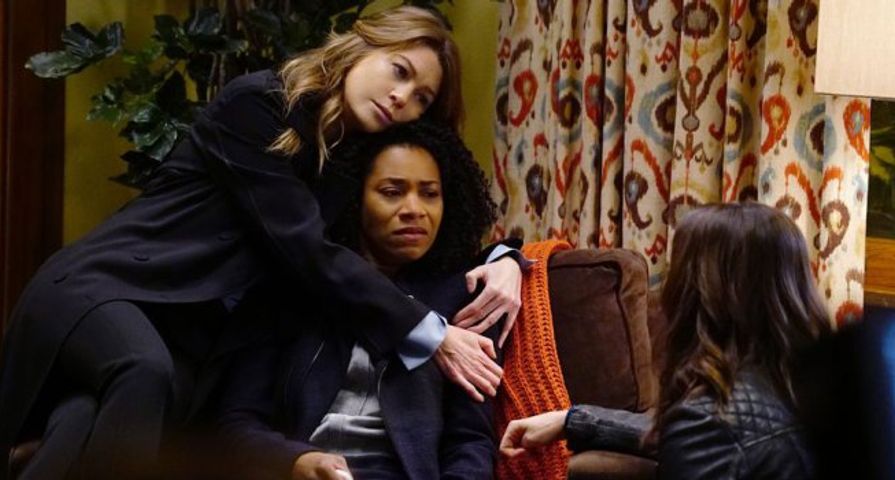 Grief was the topic of discussion at Grey Sloan this week on Grey’s Anatomy. This week focused on Maggie’s first day back at work after her mother’s death in the last episode. The opening scene at Diane’s grave-site set the mood for the episode as we watched Maggie’s coping process: visiting her mother and bringing flowers. Amelia and Meredith discuss the abnormal amount of grief they have been exposed to and whether they can define what is healthy for another person when it comes to processing grief. This little piece of banter foreshadows the overall question everyone at Grey Sloan wants to know, is Maggie emotionally ready to recommence her duties back at the hospital?

Owen’s friends from his time as a surgeon in Afghanistan, now a happily married and pregnant couple, arrive at Grey Sloan as their baby has developed a tumor on its heart. Robbins and Riggs discover that the baby needs surgery immediately, one that involves an extremely complicated procedure. Tensions rise when Maggie stakes her claim on running the surgery and Owen voices concern that she may not be ready.

While in surgery, after the successful removal of the tumor, the baby’s heart rate begins to fall. The gallery of onlookers panic that Maggie is freezing and wonder if she will let the baby die.  In response to the turn of events, Maggie calmly explains how the heart is learning to beat without the extra load, and that it just needs time to adjust. The baby’s heart rate stabilizes and confidence in Maggie’s surgical abilities as well as her coping skills returns in those who doubted her. Maggie states to Jackson post-operation that, “I’m not doing well, I’m doing my job.” The line perfectly summarizes Maggie’s approach to her first day back and dealing with her mother’s passing.

Outside of the Operating Room, Cross has checked himself into the Emergency Room in his belief that he may have a rare and interesting disease. Edwards, annoyed by Cross’ wild claims diagnoses him with an abdominal inflammation that needs to be surgically repaired through a common procedure, much to his dismay. However, mid-surgery it is discovered that Cross is actually carrying abdominal tuberculosis (TB), an extremely dangerous, contagious, and airborne disease. Although the TB was caught in time, and Cross was in no immediate danger, Edwards is forced to recognize the doubt she had been placing unfairly on her interns, the same treatment she received when she was a student.

It’s not a Grey’s episode if steamy relationships aren’t brought up somewhere. Riggs witnesses as Robbins and Dr. Minnick get out of a car together revealing their secret relationship. This stirs an unconventional relationship between Riggs and Robbins as Robbins tries to find out who Riggs is secretly dating: the answer being Meredith Grey. Meredith asks Riggs to go for drinks, but has to cancel when Maggie shows up clearly distraught over the loss of her mother. Riggs tries to convince Meredith that Maggie doesn’t need her, and in response she delivers the icy line, “I have people to take care of and you are not one of them.”

Using a classic dance montage reminiscent of early stress related dance parties, Maggie, Amelia and Meredith dance out their frustrations rather than spending the night on the couch. Jackson stops by to give Maggie her mother’s medical records proving that her mother knew how sick she was and came to Grey Sloan to die. Jackson also gives Maggie a collection of pictures her mother took while travelling once she realized how sick she was. The episode ends on a warm note with Jackson and Maggie hugging and a short scene of a cease-fire between Webber and Bailey’s season long power struggle.