Home » Trending News » We Weigh In: Are Senior Storylines The Next Great Soap Opera Goldmine?

We Weigh In: Are Senior Storylines The Next Great Soap Opera Goldmine? 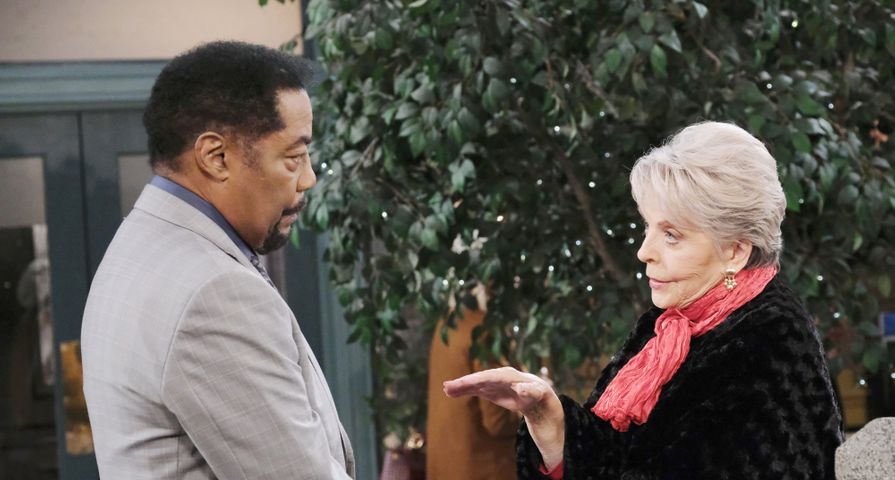 Imagine for a moment you’re Frank Valentini, Executive Producer of General Hospital (GH). You’ve just spent the majority of 2021 setting up a sensational storyline, but you’ve sacrificed a lot to get there.

You’ve had to maroon the soap’s most magnetic character, Sonny Corinthos (Maurice Benard), in a small town for much of the year, which alienated about half of your audience. While Sonny’s (sorry, I mean “Mike’s”) amnesia-imposed exile raised the stakes for what should be an amazing cliffhanger, it was a pretty boring ride to the top.

But that’s okay, because it was all for this moment: Sonny is about to remember he’s a mobster, not a bartender, and discover that his wife and best friend are married!

Now imagine you’re watching as all of your patience and careful storyboarding reaches this impeccable climax — only for a Bold and the Beautiful (B&B) storyline about erectile dysfunction to steal your thunder!

Sure, Sonny’s return to Port Charles will be one of the major moments in soaps this year, but it’s still just another amnesia storyline. B&B, on the other hand, is breaking fresh ground by exploring senior drama — and it’s territory that soap operas should’ve been covering for decades!

For non-B&B viewers, it’s difficult to express just how impactful the episode on Monday, September 13th was. Eric Forrester (John McCook), who is suffering from erectile dysfunction, romanced his wife Quinn (Rena Sofer) with dinner and dancing, and then invited the man she had had an affair with, Carter (Lawrence Saint-Victor), to spend the rest of the evening with her.

The erectile dysfunction story was already pretty original, but the ménage à trois development introduced a whole new palette of emotions for McCook, Sofer and Saint-Victor to explore. For Quinn and Carter, there were shades of outrage, embarrassment and shock as Eric gave them permission to sleep together. For Eric, there was exasperation, desperation and an undercurrent of anger as he confessed that his sex life was over. All three actors shone in their portrayals.

From McCook and Sofer’s heartbreaking performances, to the absence of any background music, the raw emotions of the scene followed no clear template — no paint-by-numbers sentimentality — for viewers to lean on. The characters on-screen didn’t know how to feel, and neither did we.

Want B&B spoilers? Check out Bold And The Beautiful: Spoilers For Fall 2021

This storyline isn’t for everyone, but everyone seems to have an opinion on it. So what makes it so original? Simply, it’s rooted in an issue that predominantly affects seniors, and soap operas don’t give seniors a whole lot of story!

Historically, characters get fewer and fewer storylines once they’re considered over-the-hill. There’s no rule of thumb or particular birthday that dictates when these actors can expect diminishing returns, but it’s inevitable. With the exception of The Young and the Restless’s Eric Braeden (Victor Newman), whose paycheck confirms that he’s an anomaly in more ways than one, most senior soaps characters have lots of personality, but little agency.

Susan Seaforth Hayes, who plays Julie Williams on Days Of Our Lives (DOOL), recently discussed this prejudice in an interview with Soap Opera Digest. In discussing her storyline, which involves the dementia diagnosis of her on-screen husband Doug (played by her real-life husband, Bill Hayes), Hayes remarked on the rarity of getting a genuine storyline at the age of 78.

“Speaking as a legacy character, I’m the oldest legacy character still standing,” Hayes remarked. “It’s pleasant to have a story that is not based on, ‘Remember when?’ or ‘You were very useful and very interesting then and now we can look back’. Instead of being taken back, we’re going forward with a story, which is delightful.”

Want DOOL spoilers? Check out Days Of Our Lives: Spoilers For Fall 2021

The story, which will have DOOL viewers in tears over the weeks ahead, is the only other senior-focused narrative on daytime television right now. That is, of course, as long as we can agree there’s a difference between inserting senior characters peripherally into younger storylines (i.e. giving advice, providing resources, etc.) and creating storylines about senior issues.

Why has it taken this long to embrace senior drama? Are we preconditioned to see these issues as taboo? A symptom of western perspectives about shuffling off this mortal coil? Whatever the reasoning, these misgivings are stopping us from “going forward”, as Hayes puts it.

“It’s nice to be representing more than nostalgia and to be involved in the here and now and hopefully the future, as well,” she added.

Want Y&R spoilers? Check Out Young And The Restless: Spoilers For Fall 2021

Is Hayes referring to a future in which senior actors will have a greater platform to perform the joys and pains of aging, the same way younger characters do? Will audiences recognize that the standard depiction of seniors is ripping all of us off? If so, B&B and DOOL are scratching the surface of the next great soap opera goldmine.

Even Y&R is flirting with a valid senior issue by taking aging bachelor Jack Abbott (Peter Bergman) through a period of intense loneliness. For an actor who was recently paired up with Courtney Hope (Sally Spectra), who is less than half of his age, Bergman’s portrayal of an accomplished man reflecting on the choices that left him alone is a bold step outside the box.

Storylines about erectile dysfunction, dementia and loneliness typically don’t track when viewers are looking for escapism, I get it. Having said that, soaps programs have gotten this far on murder, adultery and betrayal, so why not explore this no man’s land? So far, it seems to be working out rather well!