‘The Conners’ Shares New Cast Portraits Ahead Of Premiere 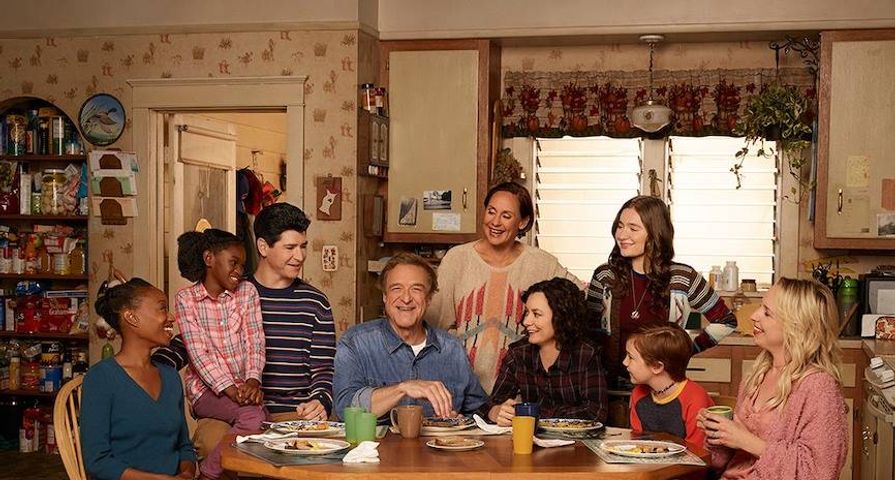 The Conners are forging ahead without their matriarch and ahead of the premiere of the Roseanne spinoff, ABC has released new portraits of the cast.

In addition, the portraits include the new members of the family: Maya Lynne Robinson as Geena Williams-Conner (DJ’s wife), Emma Kenny as Harris (Darlene’s daughter), Ames McNamara as Mark (Darlene’s son), and Jayden Rey as Mary (DJ and Geena’s daughter). The photos are all capped off with a full family portrait of the Conners all sitting around the dining room table.

There has been much controversy surrounding the spinoff which was created without the creative or financial involvement of Roseanne Barr after ABC cut ties with the star and cancelled Roseanne following Barr’s racist tweet.

With so many losing their jobs because of Barr’s actions, ABC quickly moved to save the jobs of the cast and crew by creating The Conners which will reportedly kill of Barr’s Roseanne Conner with an opioid overdose.

Recently, John Goodman, Sara Gilbert, and Laurie Metcalf spoke out in their first joint interview since the Roseanne cancellation with Goodman asking fans to just give it a chance. “We’re leaning on each other when we do this show,” Goodman said. “And supporting each other — that’s a very strong feeling among us. It’s different, but we can create something new from it. Let us finish the story on our own terms. Come along with us and see how we do.”

Everything To Know About The ‘Roseanne’ Spinoff ‘The Conners’

Although the Roseanne revival should have been entering its second season and its eleventh overall, instead The Conners is airing in its place. Many of course know what happened, but the cancellation came on May 29, 2018 shortly after Roseanne Barr aimed a racist tweet at former president Barack Obama’s aid, Valerie Jarrett. In the tweet Barr said Jarret was like the “offspring of the Muslim Brotherhood & Planet of the Apes.” “Roseanne’s Twitter statement is abhorrent, repugnant and inconsistent with our values, and we have decided to cancel her show,” ABC Entertainment president Channing Dungey said shortly afterward. Although Barr tried to rectify her tweet with explanations and apologies, and even “begged” ABC not to cancel her show, there was no chance of the network bringing her back.

Although the show is a spinoff without Roseanne Barr, it seems fans can expect much of the same tone from The Conners. Not too much has been said about plot lines for the series but the synopsis for the new show reads: “The Conners are forced to face the daily struggles of life in Lanford in a way they never have before. This iconic family — Dan, Jackie, Darlene, Becky, and D.J. — grapples with parenthood, dating, an unexpected pregnancy, financial pressures, aging, and in-laws in working-class America. Through it all, the fights, the coupon cutting, the hand-me downs, the breakdowns — with love, humor, and perseverance, the family prevails.” ABC also added, “The Conners’ stories demonstrate that families can always find common ground through conversation, laughter, and love. The spinoff will continue to portray contemporary issues that are as relevant today as they were 30 years ago.”

Of course, The Conners will not feature Roseanne Barr, but the network had to make a deal with the comedian and actress in order to ensure they could move ahead without her. Barr wasn’t only the star, she was at the head of the creative process for the show, and ABC did not want her to benefit at all from the spinoff — terms which Barr agreed to. “I regret the circumstances that have caused me to be removed from Roseanne,” the 65-year-old actress said in a statement.“I agreed to the settlement in order that 200 jobs of beloved cast and crew could be saved, and I wish the best for everyone involved.” Tom Werner of Werner Entertainment also said it was important that Barr would have no connection to the spinoff either financially or creatively, saying, “We are grateful to have reached this agreement to keep our team working as we continue to explore stories of the Conner family.”

Only days after the cancellation, rumors spread that ABC was hearing pitches for a spinoff with the frontrunner being a show based around Sara Gilbert’s character Darlene Conner. Gilbert spearheaded the “rebranded” series built around her character, and while it is unknown what other pitches the network heard, it is clear they found this one to be the best.

With Gilbert as the new center of the Conner family, fans can expect not much else to change. After the cast thought they had lost their jobs, they were quick to agree to the spinoff.  John Goodman, Laurie Metcalf, Sara Gilbert, Leci Goranson and Michael Fishman will all be back to reprise their roles as Dan, Jackie, Darlene, Becky, and DJ for The Conners which was an easy decision because they had fully expected to be busy filming Roseanne anyway. After the news of the spinoff was released, they released a joint statement: “We have received a tremendous amount of support from fans of our show, and it’s clear that these characters not only have a place in our hearts, but in the hearts and homes of our audience. We all came back last season because we wanted to tell stories about the challenges facing a working-class family today. We are so happy to have the opportunity to return with the cast and crew to continue to share those stories through love and laughter.”

Although ABC confirmed that The Conners would follow many similar themes to Roseanne, not much else is being released about the show. While everyone assumed not much would change as the cast and crew were all set to begin filming another season of the Roseanne revival anyway, there might be more to The Conners than that. Deadline reported that ABC has kept “heavy security” around any information about the show to the point where memos were being hand written and delivered instead of emailed. Why that level of secrecy for the spinoff is necessary is raising many questions, but it seems the reason is because they don’t want it leaked how they are going to deal with the absence of Roseanne.

Many were shocked with how quickly ABC formulated and greenlit a spinoff, but as it turns out it had more to do than just having a primetime spot to fill. ABC put The Conners into production immediately because of their concern not only for the stars but the hundreds of crew members who lost their jobs suddenly and unexpectedly when the revival was cancelled. “What I’m so thrilled about is that we were able to bring the whole cast back and most of the crew to work on The Conners, so that feels like a real victory,” ABC president Channing Dungey explained. “Literally the next day I was on the phone with [executive producer] Tom Werner, and he was asking whether we would be open to the idea, and about a week later, I was on the phone with Tom and [fellow executive producers] Bruce Helford and Sara Gilbert, talking about the general shape of what they might want to try to do, and we had a real conversation in another week or two after they had time to break it out. But it was one of those ideas that they came in with [a clear intention to make it work]. I was very excited about the idea of keeping people working, and I also thought there were more stories in that universe in Lanford for us to tell.”

The beloved family is returning to the small screen sooner than anticipated! The Conners premieres on Tuesday, October 16 on ABC at 8 p.m which was the regular Roseanne timeslot. Due to it being the first season with no indication of popularity, the series was only greenlit for a 10 episode first season which is three episodes less than was originally scheduled for the Roseanne revival.

With an entire primetime slot ready for the second season of the Roseanne revival, and all of the cast and crew ready to begin work on the season, writers had to work overtime to get The Conners to fill into what would have been Roseanne‘s production. Initial reports indicated that the best ABC could do would be early November for a premiere of the spinoff, but somehow they pulled it off for an October 16 premiere!

ABC knows it is taking a big risk by continuing the Roseanne/Conner family story without Roseanne Barr herself. Fans have so far been divided about whether or not they are interested in the spinoff, and regardless of some backlash, the network is expecting the show to perform well and is trusting it will live up to its Tuesday night primetime spot. Roseanne finished the 2017-18 television season as the No. 1 show in the advertiser-coveted 18-49 demo, according to Nielsen live-plus-same-day numbers, which means The Conners needs to draw in a lot of viewers and not just for the premiere to be considered a successful spinoff and contender for a renewal of more seasons.

One of the biggest things that longtime fans of Roseanne want to know is what is going to happen to her character in The Conners. There is no doubt that the show will have to address the sudden absence of the Conner matriarch, but that is one of the things ABC is keeping tightly under wraps. All that is known is that The Conners kicks off after a “sudden turn of events” which many think will spell Roseanne’s demise. The leading theory is that the show will kill off Roseanne and blame her prescription pill addiction that was seen in the revival series.

With a whole new show of course comes a whole new theme song! While the Roseanne revival kept the same tune of the original series and the same format for the opening as a camera followed different family members getting ready for dinner, The Conners will be different. Linda Perry, the wife of star Sara Gilbert, and her music company We Are Hear Music was hired to come up with a new theme song for The Conners which is a “subtle but effective revamp,” although Perry promised it will have the same “working class blues” sound that fans are used to.