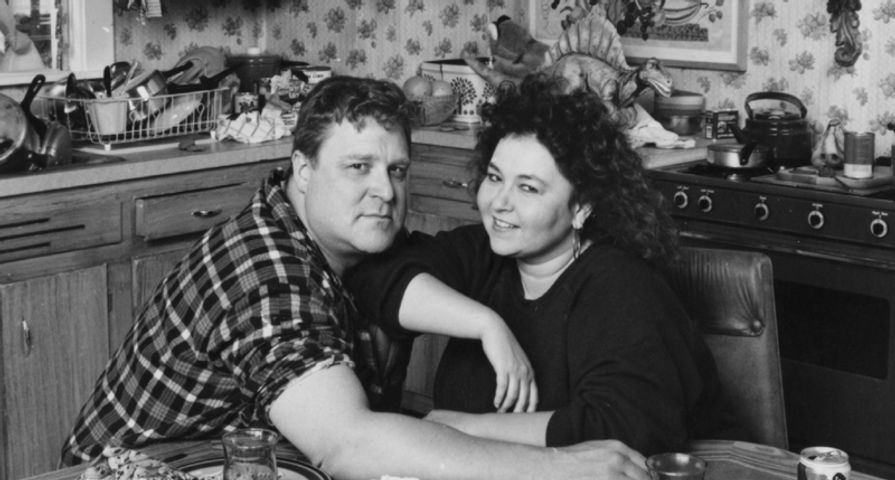 For nine seasons, Roseanne was one of the most popular sitcoms on TV and through every week and every season, fans tuned in for more. While Roseanne was delivering all the laughs, tears and important messages without fail, there was a lot more going on behind the scenes that audiences didn’t see. From good times to bad times and everything in between, here are 12 behind the scenes secrets from the set of Roseanne!

For Roseanne Barr, her career went on a whirlwind trajectory from making her first major stand-up comedy appearance in 1985 on The Tonight Show to landing her own show in 1987. Despite only three years in the spotlight as a major comedian, she had a lot of pull and it was her decision to ask for a show. “I wanted a TV show. I told my agent I didn’t want to be on the road anymore. It took many meetings with many producers. I decided to go with executive producers Marcy Carsey and Tom Werner because they had the top two series—Cosby and A Different World—and I thought they knew how to make a show out of a stand-up act,” Barr revealed. Luckily at the same time, Carsey and Werner were looking for a working mother as a central voice and heroine for a series, and that is what led them straight to the distinctive and unique personality of Roseanne.

Going into the production of the first season of the show in 1987, Roseanne Barr had a very clear idea of the show she wanted, but so did writer and third executive producer, Matt Williams. “Matt had come to my house, watched me with my kids and husband, took notes, watched my act, taped hours and hours of interviews. And I worked on creating the pilot, the situations and the characters as well,” Roseanne revealed of how the idea of a working mother at the center of a show instead of the father was truly based off her real life, but the version of the show Matt turned in was not what Roseanne expected. “Matt’s version was very sanitized, written from the little boy’s point of view. I brought my sister Geraldine in to get the sister character right. I was incredulous, getting crazier, more frustrated. In his draft I was a June Cleaver and my sister [played by Laurie Metcalf] was me. That’s how crazy it was.” Originally the show was also called “Life and Stuff” but Barr argued to have it named after her because it was about her life.

While there was no arguing that the show was about Roseanne and ABC agreed to the deal, there was still concern about the fact that she was a comedian and not an actress. Leading a stand-up comedy show is a lot different than leading an entire series, so to help alleviate their fears about Roseanne Barr’s acting abilities, they wanted to make sure the supporting cast was particularly strong. For that reason, John Goodman and Laurie Metcalf were brought in as Roseanne’s husband and sister. Luckily, the chemistry between all three was instant and many believed working with their talent is what helped develop Barr’s acting skills.

It was clear Roseanne Barr and Matt Williams did not get off to a great start, and unfortunately, it didn’t get any better and rumors of their feud on-set quickly became one of the most discussed topics in the TV industry. After seeing the pilot, Barr saw Matt’s name on it as creator and the feud blew up. “I didn’t know until I saw the pilot that only his name was on it [as the show’s creator]. They had told me it was a collaboration. I freaked. I fired my lawyers. Fired my agents. Everybody.” Even though the show became an instant success, things between the two only escalated on the set and according to Barr, Matt tried to have her fired any way possible. Barr then asked for Matt to be fired. “By the second or third show I asked the producers to fire Matt. His anger was escalating. I couldn’t perform. He’d call the cast and extras together, make us sit in a circle, and then he did this kind of Robert De Niro slow walk around the inside perimeter [like Al Capone’s skull-bashing scene in The Untouchables]. And he’d say, ‘The show tonight sucks.’ He’d walk up to me and say, ‘It’s all your fault,’ and humiliate me. Carsey-Werner told me: Make it through 13 shows, and we’ll fire him. I said okay,” she revealed.

Now, George Clooney is on top of the Hollywood A-list but back in 1988, he was an up-and-comer who appeared in the first season of Roseanne as Roseanne’s boss Booker Brooks. After his time on the series came to an end, Clooney remained a Roseanne legend because for several years there was reportedly a naked photo of Clooney, covering his privates with only a pair of goggles, on the set fridge. Apparently, either John Goodman or Roseanne Barr took the photo one night when all three stars went out partying. After a few years of the photo being a mainstay on set it “mysteriously” went missing and hasn’t been seen since.

The series was an instant success from the moment it aired, but heading into season three there were some major concerns. Fans will remember that on July 25, 1990, Roseanne Barr was asked to sing the national anthem before the San Diego Padres and Cincinnati Reds game. The performance was awful and was deemed to be very disrespectful and created such a media firestorm, the network, producers and sponsors were terrified that it would mark the end of Barr’s popularity, and by extension, the success of the show. By the time season three aired, they hoped it had all blown over and even began the first episode with Roseanne joking, “It’s such a beautiful morning today, it just makes me want to sing!” The line was met by an unplanned applause from the studio audience which signified to everyone who was worried that the show would be negatively impacted by the national anthem debacle from the summer, that everyone had forgiven Roseanne.

6. Roseanne Always Stood Up for the Kids

While it became rumored that on-set Roseanne Barr was difficult to work with, especially for the writers, there was no end to what she would do for the child actors. After many auditions for the role of DJ, which included Macauley Culkin, Barr fought to have Michael Fishman hired even though he wasn’t the studio’s top pick. Similarly, when Lecy Goranson wanted to cut her hair in-between seasons, producers immediately told her no but when she took her issue to Barr, she cut Goranson’s hair herself and told producers there was nothing they could do about it. Then, when Sara Gilbert wanted to leave to attend college, it was Barr who convinced producers she was too important to the show to be written off and had her absence written in and even made it so that she could film remotely for when her presence was needed in episodes.

Along with the tension between Barr and Matt Williams, there were many rumors of other problems behind the scenes including talk of fights between Goodman and Barr. It was reported that Goodman’s temper was causing problems on set. Roseanne revealed there were never any issues between them and when she tried to go to him for help with her problems with Matt, Goodman preferred to stay out of it. Still, the tension on set did affect everyone and Goodman could get mad enough to scare everyone cause of his size. ” He was there for me, but he didn’t want to take sides. He had his bad stuff too. John used to go berserk on the set all the time, every Friday, just out of nervousness and all the s—-. The whole cast would go berserk. John would pound the walls and scream, and we’d all be freaking out, scared s—-less out of frustration. It wasn’t just me,” Roseanne revealed of what the audiences didn’t see from the beloved cast.

After season five wrapped up, Roseanne Barr decided to make some personal changes which included plastic surgery. Barr underwent multiple surgeries on her face including a nose job and a face-lift and although she expected to be healed by the time season six began, according to Roseanne, the surgeons made a mistake and dropped a scalpel in her face. In an interview with Larry King, she said they left the scalpel there which required her to undergo a second surgery to remove it. Since she wasn’t healed for season six as planned, it was up to the makeup team to try to cover the bruises and swelling, which gave Roseanne a strikingly orange-color.

The revolving door of the two Beckys on Roseanne was confusing for some, and it was always known that Lecy Goranson left the series at the end of season four to pursue college full-time. It wasn’t until years later, however, rumors surfaced that the real reason she left was something entirely different. When Roseanne Barr visited the Howard Stern radio show, she was asked: “Is it true Lecy Goranson left the show because she was being sexually harassed by one of the producers?” Barr was shocked by the question and asked, “Where did you hear that?” before quickly changing the subject. While Goranson has never made these claims herself, the rumors have still swirled about why she really wanted to leave the show.

Looking back on Roseanne, fans will notice a few common motifs and hidden themes in the show, and one of the strangest had to do with a particular shirt. After the first season of the show, Roseanne ended her marriage with Bill Pentland to be with her longtime friend and fellow star Tom Arnold. It didn’t take long for Arnold to work his way onto the set of Roseanne and soon enough he was taking control away from Barr herself. After their split, Barr made a point of digging out an old shirt that Arnold used to hate, a white sweater covered in cartoon rooster and eggs. Barr never said why Arnold hated it so much, but after their split, the shirt can be seen in every episode where it was worn by multiple characters or could be seen in the background somewhere. While the presence of the particular shirt was never directly mentioned on the show, behind the scenes it was well known what it meant to Barr in terms of re-establishing her freedom and control on the show.

Despite reports that Roseanne Barr was particularly hard on writers, and would call them by number instead of name if she thought they were getting too entitled, the show ended up starting the careers of some of the most successful people behind the scenes of TV today. Joss Whedon — who has created, directed and/or wrote shows and films including Buffy the Vampire Slayer, Angel, Firefly, Toy Story, The Avengers and more — got his first writing credits on Roseanne. Chuck Lorre — who has written, created and produced some of TV’s most popular sitcoms including The Big Bang Theory, Two and a Half Men, and Mike & Molly — also had some early work on Roseanne. The same can be said for Gilmore Girls writer and creator Amy Sherman-Palladino, and since working on Roseanne was known to be so difficult, many point to their time working on the show as to what gave them the toughness necessary to work in the entertainment industry and become successful.