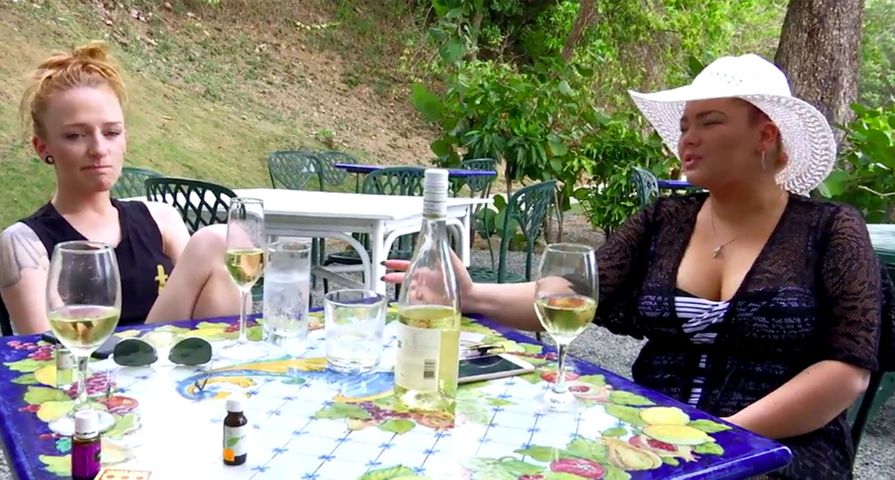 The Monday, May 29 episode of Teen Mom OG was full of laughter, good times, and some pretty serious revelations as the OG women minus Farrah Abraham took a trip to Puerto Rico.

For fans that follow the stars on Instagram, they have already seen some of the highlights from the Puerto Rico trip, but the episode had the whole thing and kicked off with Catelynn planning the trip for her birthday. Unsurprisingly the only star not invited was Farrah Abraham, and Maci had no problem commenting “only important people on the show” were on the trip. While packing Catelynn also added, “I’m sure everyone’s gonna wonder why didn’t Farrah go? It’s cause she wasn’t invited.”

After getting to their destination the girls began having a good time, but also discussing some serious topics as Maci admitted she also struggled with postpartum depression. “For me postpartum was much easier to deal with when I was able to admit it and understand it was OK… I just didn’t feel like I was gonna be able to love Jade the way I love Bentley. It makes you feel like a terrible person.”

In another shocking revelation and heavy conversation, Maci then tearfully admitted something that Teen Mom OG fans suspected and had been rumored for awhile which is that Maci’s ex and Bentley’s dad Ryan Edwards had a drug problem. “I don’t think Ryan and I would have ended up together no matter what,” and then Amber brought up his issues with drugs saying, “Ryan’s f–ked up. I watch it. I see it. I know it.” Catelynn added, “Has anyone talked to him about going to a treatment center?” Maci responded, “He would do it. It’s everyone around him who’s afraid…afraid of what it will look like, more than his health…I’m sick of cleaning up his mess.”

Maci opened up further, and revealed that Ryan’s drug problem had become extremely worrysome. She said that every day she can’t help but think “if today’s gonna be the day that Ryan does something that he can’t come back from.” She later told her husband Tyler, “I’m just gonna be like, ‘You have to go to rehab.’…It’s about saving his life.”

As well as Maci’s issues with Ryan, there were more tears as Amber Portwood opened up about her father’s death and broke down over the fact that her dad died before getting to see her get married. Meanwhile Catelynn and Tyler got personal over feeling guilty for giving their first daughter Carly up for adoption and had to leave the table when she became upset about remembering Carly’s birth and her postpartum depression afterwards. “She’s got a lot of guilt…we could have a 7, 8 year old running around,” Tyler explained.

While everyone else was in Puerto Rico, Farrah was headed to the South By Southwest festival where she talked about her entrepreneurial empire and told one journalist she wanted a man who was a “Found, badass, Forbes 500.” She also revealed that she had put her plans to move to San Diego on hold because “I feel like I’d get more work done in L.A.”