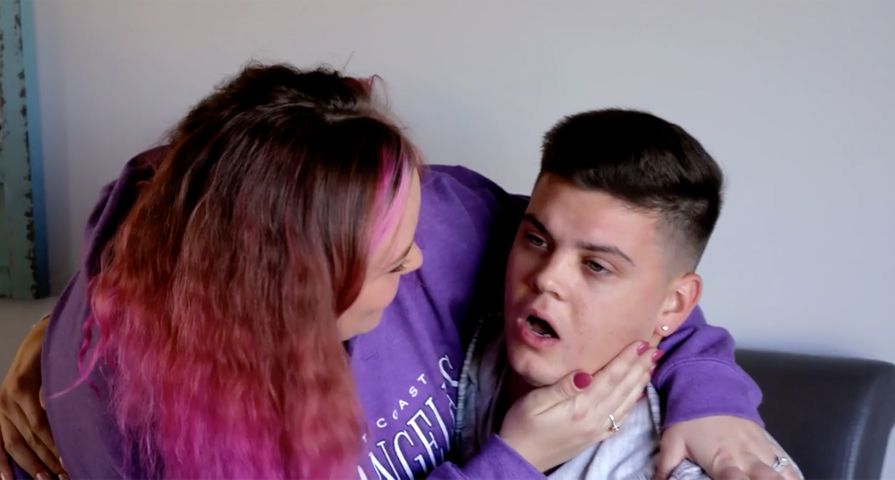 This season of Teen Mom OG has been all about changes and growing families, and the Monday, January 29 episode had a huge surprise in store for fans! As Catelynn tells Tyler they are expecting, Amber introduces her family to Andrew and drops the news she is pregnant, Ryan finally gets to see Bentley and Farrah and Debra continue to butt heads. Follow along for a full recap of the action-packed episode:

In episodes leading up to “Fertile Myrtle,” Catelynn opened up about wanting to have another child and went to the doctor to get her IUD out in order to surprise Tyler when they did become pregnant. It seems it didn’t take long as Catelynn proudly presented Tyler with their daughter Nova wearing an “I’m going to be a big sister!” shirt. A completely confused Tyler asked, “Why do we have that shirt?” and Catelynn clarified, “Because she’s gonna be a big sister!” In complete shock, Tyler asked how many pregnancy tests Catelynn took to make sure and she confirmed she took four all of which said she was pregnant. Tyler exclaimed, “Oh my gosh! You’re a fertile myrtle.” The episode was surprising to fans because, with Catelynn in treatment for her depression and mental health for the third time in only a few months, there has been no mention of a pregnancy. Reports from The Ashley stated that a few weeks after the episode was filmed, Catelynn actually suffered a miscarriage, but Catelynn and Tyler have not spoken out.

Meanwhile, after a long battle to see Bentley after getting out of rehab, Ryan finally had some time with his son for his birthday. Maci insisted that because she still didn’t have any results saying Ryan had passed a drug test she didn’t want him alone with Bentley. While alone, Ryan and his wife Mackenzie revealed he had passed different tests for his lawyers but Maci never asked for the results. While Ryan spent so much time fighting to see his son, it was weird when his parents Jen and Larry showed up with Bentley, Ryan wouldn’t get off the couch to say hi or hug him. Despite a lot of tension, Mackenzie proved that they were all working on their relationship with Maci when she texted her to confirm that Maci, her husband Taylor and their two kids were all invited to Mackenzie and Ryan’s big wedding.

With Amber Portwood’s relationship with Andrew Glennon moving at warp speeds, his introduction to her family was even more awkward than it normally would have been. Although Amber had already told her ex Gary Shirley that she and Andrew were expecting a baby, her family hadn’t even met him yet. While going to a pumpkin patch with Amber’s daughter Leah, her cousin Krystal and her child, and Amber’s mom, Amber just outright told them the big news. Her mom was initially very upset by the news but added she was just shocked, especially because she didn’t know Andrew very well but hoped he would take good care of Amber. Unfortunately, Amber’s pregnancy news was leaked to the press before she could announce it herself or before they could tell Andrew’s family, and Andrew thought it might be Gary who told the media, but Amber didn’t think so. Meanwhile, Gary and Kristina discussed Amber’s pregnancy. “They could be great parents. It could be Amber’s second chance,” Gary told Kristina. “I hope that she takes care of the kid.”

After their trip to Italy, things seemed to be somewhat mended between Farrah and her mother Debra which called for a girls’ night out to karaoke and Debra once again asking Sophia and Farrah to attend her wedding to David. When Debra asked Sophia if she would come, however, she responded, “I don’t like David.”