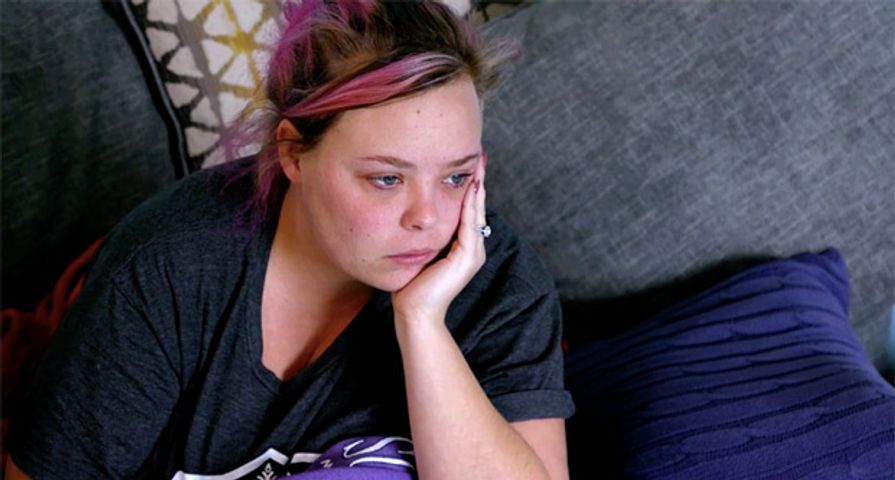 This season of Teen Mom OG has been a rollercoaster of emotions for all of the stars as major changes have shifted their lives, but the Monday, February 26 episode, “I’m Beautiful, I’m Smart, I’m Strong,” was without a doubt the most emotional of all.

In the episode, after revealing earlier in the season they were expecting again, Tyler revealed that Catelynn had suffered a miscarriage. “It was very traumatic. [I saw] her shaking, and she’s got blood everywhere,” Tyler told their producer Kerthy. “She kinda like cleaned herself up and we figured what was going on. Spotting’s normal but clotting … all the clots are not. We just sat on the bed and cried. We just held another. There’s nothing you can really do.”

After Catelynn went to the doctor, her miscarriage was confirmed and immediately Catelynn began sinking into her depression and told Kerthy that if it weren’t for Tyler and their daughter Nova, she “probably would have offed herself.” While Kerthy and Tyler both tried to support Catelynn, Catelynn later Kerthy that she wanted to kill herself which caused Tyler to break down, but also prompted him to find a treatment center in Arizona to help treat Catelynn’s mental health issues, which she headed to right away.

Meanwhile, Maci also took control of her own health issues as she opened up about having PCOS (poly-cystic ovarian syndrome) and met with a doctor hoping to find new ways to deal with her own health condition which included making a trip to Austin.

Amber’s storyline was mostly dominated by her ex, Gary Shirley, who was on a mission to find out if the man he always believed to be his dad, Jody, was actually his father. Because of the uncertainty, Gary and Jody took a paternity test, and Jody admitted that while he was locked up when Gary was born, he is sure he is Gary’s father.

Meanwhile, Farrah Abraham’s penchant for lashing out wasn’t directed at her mother in this episode, this time it was aimed at her producer. It has been no secret that Farrah has never treated her producers or the MTV crew well, but the episode really highlighted the issues. Farrah snapped at her producer Kristen because she was sure that the “on-set teacher” gave Sophia candy against Farrah’s wishes. Farrah immediately fired the teacher and demanded that a replacement was found, but because of the short notice it was impossible which meant they had to shut down filming for the day, which only angered Farrah more. Eventually executive producer Morgan Freeman had to step in, and the issue came up that Farrah was moving forward with her webcam sex shows after telling producers she would not be making another tape which allowed them to keep her on the show. With the new problem presented Freeman told her they had to sit down to discuss her further “participation” in the series, and told a producer if Farrah went through with her Halloween webcam show, she would have to be cut from Teen Mom OG. While the episode ended with a “to be continued…” as the crew showed up at the door, fans are well aware that Farrah was indeed fired and is now taking MTV, Viacom and the production crew to court and has sued them for $5 million.